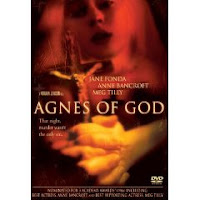 Tonight are auditions for AGNES OF GOD. I read the script back in July, and was going to audition for the role of the psychiatrist. But later realized they want someone in her 40's or 50's for that role. Um, nope. Not only am i only 31, but i LOOK about 21, so not going to happen! Later i was encouraged to audition for Agnes, who is 21, & who gets to sing acapella & who gets to be crazy/psychotic. Fun as that may be, Agnes is a former anorexic & i just don't think i physically fit that role! I picture someone frail (you would too reading the script!), so i won't be auditioning for her either. The only other character is the head nun & they want someone in their 50's or 60's for that, so... yeah. I'll try for this one in about 10years.

But i do LOVE the script. It's very dramatic, okay? And disturbing. Could have been part of a Law & Order SVU episode, for sure. And i like that kind of stuff. But yeah. It's crazy. Heart wrenching. The young nun is accused of murdering her own newborn baby & she swears she didn't even know she was pregnant. The psychiatrist is court appointed & her job is to determine if Agnes is insane or not. It's a great script. So, when the director (of the theatre, not of this play) texted me asking if i was missing them yet & asking if could Stage Manage this production, i agreed. I love stage managing. I do want to get back ON the stage one of these days, but i am not right for these roles & i want to be a part of it. Besides, my FAVORITE stage managing experiences are PLAYS (not musicals) & have small casts (only 3 in this one!). It's on second stage, also, meaning a shorter time commitment (month & a half).

So anyway- Bill Martin is directing. I've worked with him before as an actor - we were in Urinetown together - & i've SM'd another show he was in, i think (though i can't remember what show at the moment, so maybe not?!). He is hilarious, has that dry sarcastic humor that cracks me up. It will be interesting working with him as director since i never have before. I can't wait to find out who the cast will be! Auditions are great fun when you are not the one auditioning! Hehe. Anyway, tonight are auditions & tomorrow are callbacks. Rehearsals probably start next week.

In November are auditions for The Elephant Man & then that will be my last show for awhile, since i plan to go back to school in January!!

Posted by Melissa at 9:49 AM
Email ThisBlogThis!Share to TwitterShare to FacebookShare to Pinterest
Labels: Auditions, BlogBook, BRLT, Theatre