So, don't you just love it when - after being really upset or frustrated with a situation - you suddenly see it from God's perspective? A perspective above your own, the RIGHT perspective & suddenly you just GET IT? You didn't even realize you were having the wrong attitude but suddenly you just see something CLEARLY where you weren't seeing well at all before? Am i making sense here??

Okay, so, when i got engaged to this handsome sweet husband of mine, i knew that he lived in (owned) a trailer & that was where we'd live for a few years. I was fine with that, but hoped & prayed (& sometimes made comments about the fact) that i would NOT raise our children in a trailer. At first it was just a comment i made every once in awhile. But then day after day friends (usually newlywed friends) would post about finding their first home & buying it & i would get SO jealous. I am not a jealous person. The feeling is so rare for me i was surprised i knew what it was. I hate jealousy. But there it was in my gut. I wanted a house. I didn't have one. Everyone else was getting one. Not fair! Whine whine whine.

Since Brad seemed to care less about getting a house, I worried we wouldn't get ours until our kids were teens. I imagined myself couped up in this small trailer with three kids & only room for one of them, beds in the living room & me getting so tired & frustrated with it. I hate clutter & i just would go crazy in an environment like that! And i just didn't want that for our family. It wasn't a case of "keeping up with the joneses" (though that is how i made it seem when i would get very jealous of our home-owning friends), it was just that i want our children running in a backyard (which we don't have at this time) & i picture me with more cabinet space. Enough space for kid's rooms & their dad's studio...you see what i mean. I think in wanting a house SOOOOO BADLY i unintentionally put pressure on Brad that he did not need & made him feel like crap. Confession: I would even cringe when i told friends i lived in a trailer park (when giving directions to our house) & i'm sorry for that & i realize now how ridiculous that was. Our trailer is in a nice & quiet neighborhood. They are cute little places & when i moved in we painted & made things less "bachelor pad". It's nice. I have never thought less of anyone who lived in a trailer, but for some reason i acted as if it was just deplorable conditions. Please. :(
Well, one day last week, i was just in lala land (a common thing for me), daydreaming & (i know i'm wierd, but this is just how it goes with me!), one thought led to another & somehow i got to thinking about things i WANT. Versus things i NEED. My thoughts went something like this:
Wait. House. Want. House- WANT?!?!
And then it hit me. & at first i told Brad that it hit me hard. But really it hit me gently. Does that make sense? Because i really just felt like it was God patiently explaining something to His daughter. It was just like this: A house is a want for you. It's not a need. It's just a want right now. But rest assured- when it goes from "want" to "need", don't you worry. I will take care of you both. You will have your house when you need it. But right now- 2009- what you have is absolutely perfect...that's what i felt Him saying. And i am so thankful. (& i know Brad is too!) 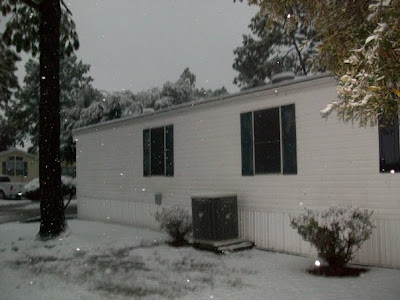