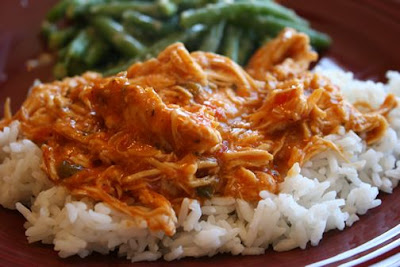 This stuff is DELICIOUS!

It came from SparkPeople's website which is a healthy living site. I don't even remember how i came across it, because i think i've only heard of that site once or twice! But i will definitely be visiting it much more often!

Directions:
1. Add chicken to slow cooker (i cut mine into strips).
2. Sprinkle taco seasoning over chicken.
3. Pour salsa & soup over chicken.
4. Cook on low for 6-8 hours.
5. Remove from heat & stir in sour cream.
6. Serve over rice.

The actual recipe said cream of mushroom soup, but several reviewers of this recipe said they used cheddar instead & that is what i did. It was perfect! I only used half the pack of taco seasoning & i think any more would have been too much! Others said they served it with black beans. Also, a lot of reviewers said they used it on a tortilla the next day for leftovers. I'll have to try that tomorrow. :)

How easy is that recipe?! & it was so good!!! A keeper, according to hubby!

By the way, i hit google images & entered "salsa chicken" to find a picture of it & there it was...exactly what mine looked like. The picture came from this lady's blog "What's For Dinner?"" The only difference in her recipe & the one on SparkPeople is that she mixed the soup & salsa before pouring it over the chicken & she shredded the chicken when it was ready, which is a great idea. Very cool blog if you want to check it out!