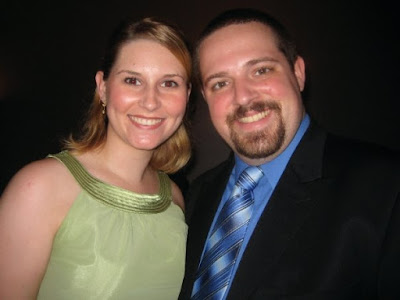 I am so excited! Two of my very best theatre friends are now engaged!!! Mary & Chris & I all met in our first production at BRLT- Beauty & the Beast. Chris was actually a lead- he played Cogsworth. Mary & I were both in the ensemble. I remember that first rehearsal. I didn't know anyone & I sat by myself. Mary didn't know anyone either. She came & sat by me. We became friends quickly! At some point, i got to know Chris as well. The cast of Beauty & the Beast bonded quickly & many of us have stayed very close. Other plays have come & gone & people come into & go out of your life. But many people from the cast of Beauty & the Beast remained really good friends.

I remember Chris really liking Mary during Beauty & the Beast, but i think it took Mary awhile to realize that she liked him as well! I am not even sure when they became official, but i believe it was well after the closing of Beauty & the Beast. If i'm guessing right, they started dating officially, probably fall of 2006. The picture above was taken at my wedding in November 2008.

I just love these two people! They both are very talented & so sweet! Mary is such a great girl friend to have- you can talk to her about anything. And Chris' laugh. I have heard it from backstage when he is sitting in the audience! Hilarious! They make a fantastic couple & i am so excited that they are going to tie the knot! I don't know if a date has been set. He just proposed today! But i can't wait to see her walk down that aisle!