I recently wrote a blog where i told you to Ask Me Anything.

Natalie asked,
"How does Brad make his coffee? I'm dying to know what makes it so special!"


Ahhhhh, Natalie. So glad you asked!!! For those of you who don't know, i am constantly talking about my husband's coffee. Because, I am telling you, it is THE best. coffee. ever.
SO good. And all it is? Is ordinary Community Coffee. 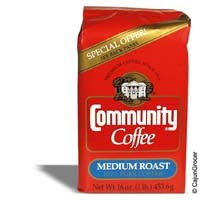 We drink Community Coffee at work, too & it is just NOT that good. Not because it's Community (they rock) but because i really don't think we make it right. Or something. My parents also drink Community & it's good, but it is still nothing compared to the coffee Brad makes. But that's because the secret is not the kind of coffee.

The secret is in the pot. 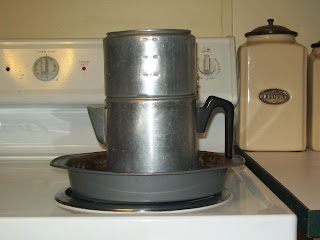 I personally like to call it: "Old timey coffee". :) Brad uses a good old fashioned drip pot. I've recently become aware that this is called French Drip. I have no idea, but i'm telling you. It's the best!!! His parents & sister make it the same way & it is SO good!! :)

Just to make it clear how much i love his coffee... before marriage, i was pretty into Starbucks. I loved it. I went a lot. I was addicted. Since we've been married - 11 months now- i might have had Starbucks 4 times. (Sorry, Starbucks. I still love you.) By the way, no comments from the peanut gallery about drinking Starbucks & how CC's is so much better! Obviously, i know CC's is delicious or i wouldn't be choosing Community at home every morning!! ;) But i do also love me some Starbucks!

So anyway. If you're ever in the neighborhood, give me a call & i will invite you in & have Brad make a fresh pot! Actually, more than likely we'll already have one ready for you! HAHA! :) Brad is always saying, "I think i'll make some coffee". I've never seen someone drink so much coffee! I've always been a morning coffee drinker myself. But man, this stuff. Addiction. I just love it. Brad doesn't always have time to make it in the morning before work. In which case i have coffee at work & ... it just doesn't do it for me! But if he does make it before work, i pour some in a travel mug & take it along!! :) 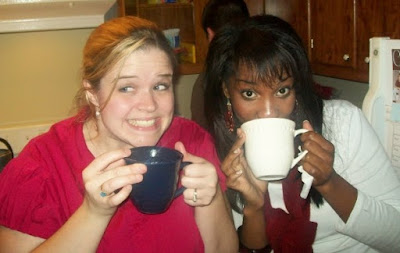 Megan having her first taste of Brad's coffee...& me obviously excited about it, too!

By the way, it's not to late to Ask Me Anything!