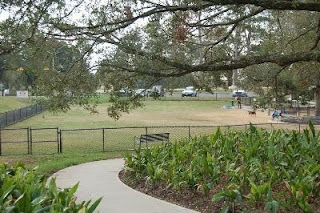 I want to say this has got to be Baton Rouge's best kept secret...but i actually think that i'm just one of the last to discover it. ;)

I am speaking of City Park on LSU campus...same place as Cane's Dog Park.

So i've had some friends tell me that Baton Rouge now has a dog park. & i thought that sounded cute & cool & everything, but i had.no.idea.


We met a photographer friend there to take some pictures. She told me to take the Dalrymple exit & take a left & that the park would be a little ways down on my left. So we did. We had Fievel with us. It was a beautiful day. PERFECT day for the park!
Anyway, wow. I had no idea how nice that place was!! No clue!! It was just beautiful. Not only do they have a dog park but they have a kid's playground, lots of land & trees & picnic tables & sidewalks & benches...& even very clean nice bathrooms. We were impressed.
Fievel LOVED it. He had the best day. He hardly ever gets to go outside (except to go to the bathroom!) & he loves outside. There were SO MANY dogs there. Dogs EVERYWHERE. They are on leashes unless they're in the dog park area. I didn't take Fievel in there- he'd be the smallest one! There had to be 30 BIG dogs running around. They all seemed non-aggressive, i'm sure it would have been fine, but i think i'd feel better letting Fievel play with maybe, you know, 5 other dogs...as opposed to 30! But Fievel really enjoyed being there!! He was so cute! 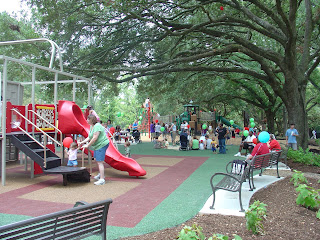 After we had the photo shoot, we made a quick trip to American Market for some sandwiches. I remember when i went to LSU, the sandwiches at American Market were SOOO GOOD. Brad had never had one & i had missed them! SO i got us both the cajun turkey, some drinks (including water for Fievel!) & we went right back to the park! We sat at a picnic table & had our lunch & fievel sat on the ground beside us & just looked around. He loves being outside, but this was a DREAM with tons of kids & dogs around!! He loved every minute! (He would never look at the photographer! Way too distracted!)
I so wished i had brought my camera to share pics! These pics are just random ones i found online & really- they do the city park area no justice at all! But just an idea. :) The top photo is of the dog park - hard to tell with hardly any dogs! But today, the area was packed- not in an annoying way, though! Just lots of people & their kids & their doggies.

Anyway, it was really nice & we've decided we are going to continue going there on pretty days. We'll bring lunch & a book!

Posted by Melissa at 10:52 PM
Email ThisBlogThis!Share to TwitterShare to FacebookShare to Pinterest
Labels: BlogBook, Fievel the Dog, LSU, weekends