So, I've been telling our love story, in case you're just now reading. If you haven't read Part 1 & Part 2, you should do that first! =)

Unless, of course, you're one of those that skips to the last chapter. =)

But as I was saying, things were dim. I was longing for a husband. I was having fun in life, don't get me wrong. I was very involved in the theatre still & i loved that. My roomie was a wonderful friend, too. It's just that something was definitely MISSING. I honestly felt like it was TIME for me to have a husband in my life. For many reasons. I WANTED one before, but now i really needed a best friend, a partner in life, someone who cared for me above others (that i could care for above others in return). I was beginning to be convinced that it wouldn't happen to me.

My friend Rachel & I decided to have a Christmas party for some theatre friends at her house. And that was the night that I received THE text message. We were just having a grand old time at this party & I had no idea that at that moment, Brad was working up the nerve to call my parent's home, in an effort to get in touch with his ex-girlfriend. 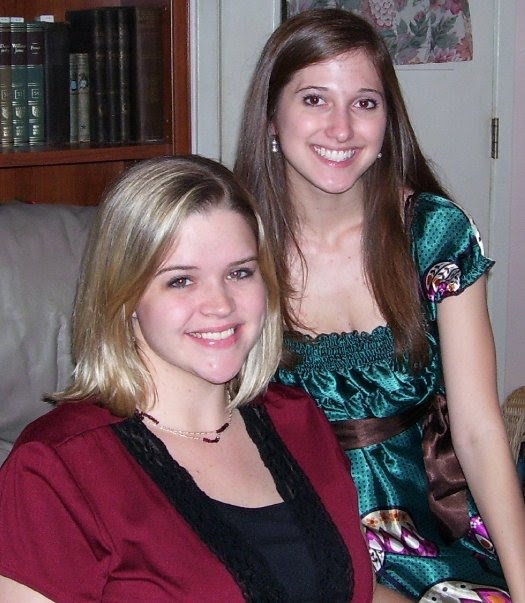 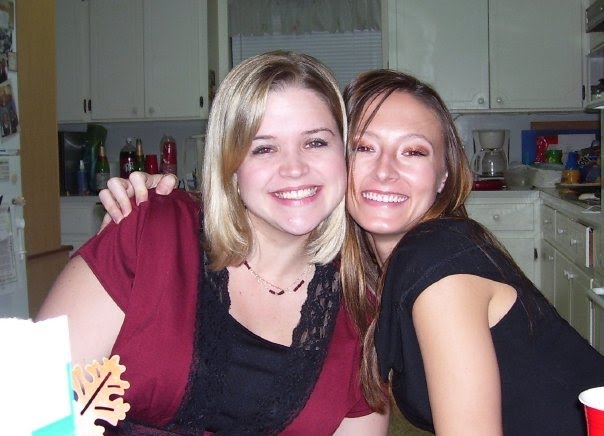 (The above pics are of 3 of my favorite theatre gals! Just 3 or 4 months after these pics were taken, the four of us were cast in Best Little Whorehouse in Texas...as 4 of the 8 whores! HAHA!)

So i was at this party. And everything was great. And then i got a text message from my sister. I always say this was a text message that changed my life! I hear my phone give me a little chirp to let me know i had a text. I am laughing, talking, having a grand time. I think i was actually icing cupcakes or something?! I don't remember. But i grab my phone during all this & it's my sister, who had moved back in at our parents. Her text said, 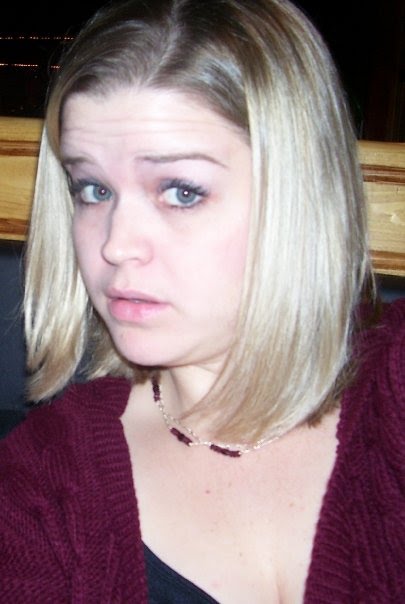 I was SHOCKED. STUNNED, might be a better word. I mean, seriously, people. You've read these three parts of our story over a week or two, but this was over 10 YEARS.  I hadn't even SEEN him in 10 years other running into him a few times, the last time 3-4 years ago!I never in a million years thought he would be trying to get in touch with me.

I was freaking. out.

Well, it turns out i am GLAD she gave it to him. Because if she hadn't & had gotten his number instead, for me to call him if i wanted to... well, there is just NO way i would have gotten up the nerve to do that! Yep, best to just give him my number.
(Unless, of course, he turns out to be a complete psycho freak.
But thankfully, that's not what happened!)

He didn't call me that night. I think they may have told him i was at a party & may not answer my phone. The next day, i was working at the gift shop where i worked at the time, gift-wrapping a present for a customer. My cell phone rang. I immediately knew it was him, because the digits of his phone were from the same area where he lived before, & none of my other friends lived out there. I didn't answer it. I just thought it'd be a little wierd to answer a call from my Ex-Boyfriend from 10 YEARS AGO (you got that?!) when i was busy with a customer & wrapping a gift. SO i finished what i was doing. When i was done wrapping the gift, i remember i snuck in the bathroom & listened to his voicemail. I had to admit. He still had that same sexy voice that i loved! But...

Yeah. Those were my thoughts.

So, when i left work, later on, i called him. The minute i left. And he answered. He asked how i was doing, what i'd been up to, and then he asked me to dinner. He said he just wanted to catch up. Umm, okay? I think we went out that evening.

I kind of hoped so.

We went to Bennigans. The entire date, start to finish, took about an hour & a half. Max. And when i got home, i was absolutely 100% NOT interested.

I don't even remember why. But i thought he hadn't changed a bit. And i just didn't want to go out with him again. He was nice & all. But he wasn't who i wanted as a husband. That was a Saturday night. The next day, after church, I would be leaving with my family to go to Mississippi for Christmas. I really was looking forward to church. I wanted to forget about all this dating stuff & really focus on my Father at church the next day.

I thought - i am just going to go to church & worship God - & then go to Mississippi & FORGET about Brad. I can deal with him when i get back.

Well, GUESS WHO was at my church the next morning?!?!?!

I thought, NO WAY. You have to be kidding me! Now he is stalking me! I had mentioned my church's name in conversation on our date & told him he would LOVE the music there. So that meant he'd looked it up that evening & found out where it was & came!? I didn't think it was cool at all. I didn't want to be near him. I was a part of the praise team & we went on stage ready to start service when i saw him. I remember telling some of my fellow backup singers, "OMG. That is my Ex. What is he doing here?!" HAHA. But i sat by him anyway, because that would be the nice thing to do. Right? I mean, i felt i had to. But i didn't want to!

After church, i think he asked me to lunch again but i told him i was headed out of town for Christmas. And that was that. 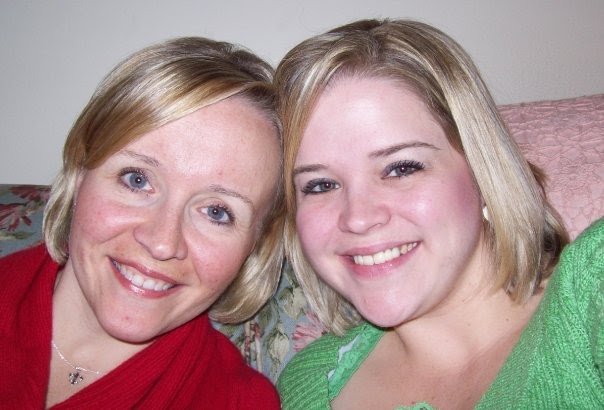 While in Mississippi, I managed to tell the family that yes, i went out with brad & no, he was not the one, i was not interested. I remember mom telling me i should give him a chance & that i was being too hasty. I was so mad at that! I was like, How can you say i'm being to hasty?! I know what i feel, if i'm interested or not & i'm NOT! I can't help that!!
But, as it turns out, she was right.

I went back to Louisiana & i thought, you know what? maybe i AM being too hasty. I'll give this another try. If he asks me out again, i'll go. After all, how could i write him off right away. Brad & i are both reserved types, it takes us awhile to get comfy & talk freely. I know i'm like that & i knew he was like that. So we weren't even NEAR ourselves on that first date. Everything was awkward. I wanted chemistry, sparks. Something we'd always had. I wanted fireworks. I thought i would KNOW right then, the minute i saw him. But i didn't yet. But i thought, maybe i'm wrong. If he asks me again, I'll give it a try.

SO when i got back we went out 2 more times. Once to Brewbachers after church (yes, he came again!). I actually enjoyed myself this time & got to know a little more about Brad. He told me all about the Hebrew he'd been studying & how interesting it was & i thought it was really cool. It was enjoyable conversation.

We went out one more time, to Outback. This was the serious conversation. You see, at this point, i was really getting into the acting thing. I wanted to find an acting school, enroll & get better. I wanted to move to NYC or something! & you may find that funny but i was serious about this. Normally this would be something you'd do at age 20 or 21, but here i was nearing 30, ready to follow a dream. I felt that i was single, no man in sight, might as well go for it, right? Or at the very least, just go to acting school & come back. SO i was definitely looking into that. I was serious about it. HOWEVER, if God brought a man into my life then i would have NO PROBLEM staying & marrying & all that! I could easily let go of the acting thing, because what i really wanted above all else, was my own family. To be a wife & mom. But i didn't have a man. And it didn't look like i would have one. SO i was pursuing my dream.

Well, at dinner that night we were talking about Brad's music & my theatre. And, at some point, Brad said, "So...how far are you wanting to take this acting dream? I mean, do you want to like move to California or something?" I knew when he asked this that it was serious. I knew it may even determine our relationship. But i had to be honest. I answered,

"I want to take it as far as God & my potential will take it," I told him, honestly, "I mean, if that means moving, so be it." I told him that it would more likely be NYC than California since i was more interested in theatre & i told him that it may even just be for a season, to get some good training & then come back home.

I did not tell him that if i met my future husband & fell in love, i would be willing to stay & forget about Broadway! I thought that would seem a bit presumptious & such, you know? So i left that part out.

I knew after that conversation, that it was over. I went home that night, realizing that he wanted to stay here & realizing that a future together for us wasn't going to work.  I liked him again. I wanted it to work. But it wasn't meant to be. I was actually pretty ticked at God about this. I mean, after all, i'd been begging him for my husband, talking to him about it regularly. So then my first love, my only true love shows up in my life after 10 years. And i almost write him off, but realize i'm being too hasty. SO it try again. Only to find out it wasn't going to work! It kinda made me mad. I kinda felt like God was just dangling a treat in front of me, to taunt me, like boys will do with dogs. Just to tease. That's how it felt. I felt like God was teasing me & not nicely either! I was upset, because i felt like it'd all been for nothing. Back to square one.

I told my roommate that night, "You know, I think Brad is a really great guy & he is going to get a really great girl. But it's not gonna be me. We're going in two totally different directions in life." And that was the end of that!

Posted by Melissa at 8:51 AM
Email ThisBlogThis!Share to TwitterShare to FacebookShare to Pinterest
Labels: BlogBook, Brad, Life, love, our love story