You may have noticed (or maybe not, yet) that i have two different titles going on here...White Chicken Chili is the blog title, while Creamy White Chili is the recipe title in the blog. Hmmm. Well, here's the deal. I bought the ingredients for White Chicken Chili, a recipe i found in my Better Homes & Garden's cookbook. It looked delicious & so i got the ingredients. This evening, i went in the kitchen, got out a cutting board & opened the cookbook, ready to go. I began skimming through the recipe only to find...that it's a SLOW COOKER RECIPE. Ahhhhh!!! (This is why you should always read through a recipe FIRST. One day i will grasp this concept, but so far, i continue to find out things that i really would have liked to know BEFORE i got the groceries (or at least before i decided to start cooking!). Hubby was like, "don't worry! we can still eat it tonight!" ...then we both looked at the clock. 6:20. The recipe said in a slow cooker 3 - 3 1/2 hours. Yeah. We're going to have dinner at 9:20, when we're starving now?!!? No thanks. So i said, "i'll find another recipe for White Chicken Chili!" (I'm a smart girl.)
So i opened my Taste of Home Winning Recipes cookbook & found this one. Creamy White Chili. I like the title of the other one better & since they are basically the same thing (barely a difference in ingredients at all!), i thought - i can name it whatever i want!! (not sure if they winner of this recipe would agree, but she'll never know...)
So anyway- here ya go. It was DELICIOUS, by the way. My hubby LOVED it. But please do see my notes after the recipe, as i made some changes in my own version.
Creamy White Chili 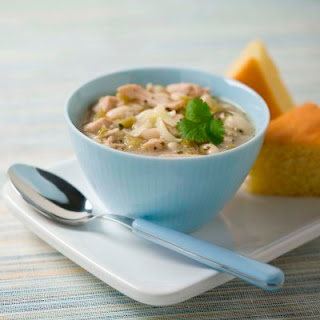 1 lb. boneless skinless chicken breasts, cut into 1/2 inch cubes
1 medium onion, chopped
1 1/2 tsp. garlic powder
1 T. vegetable oil
2 cans (15 1/2 ounces each) great northern beans, rinsed & drained
1 can (14 1/2 ounces) chicken broth
2 cans (4 ounces each) chopped green chiles
1 tsp. salt
1 tsp. ground cumin
1 tsp. dried oregano
1/2 tsp. pepper
1/4 tsp. cayenne pepper
1 cup (8 ounces) sour cream
1/2 cup heavy whipping cream
In a large saucepan, saute the chicken, onion & garlic powder in oil until the chicken is no longer pink. Add the beans, broth, chilies and seasonings. Bring to a boil. Reduce heat; simmer, uncovered, for 30 minutes. Remove from the heat; stir in sour cream & whipping cream. Serve immediately. Yield: 7 servings
* * * * * * * * * * * * * * * * * *
My Notes:
I did not have any chiles, so they did not go in my version of the chili. I think it was fine without it, but if you like it spicier, you may want it! I also only had 1 can of the Great Northern Beans (because the slow cooker recipe version only called for one can); however, i think the one can was plenty.

Also, if i were to do this dish again, i'd do LESS whipping cream & more chicken broth. Or maybe milk instead of whipping cream. It gave me a bit of a tummy ache. Then again, hubby does not have a tummy ache & i am sort of lactose intolerant ("sort of" means i was as a kid & am not really sure if i am anymore, since i can have plenty of dairy with no stomach ache at all & some dairy with a terrible one. It's so random that i'm not sure if it's intolerance or just a coincidence.).
Also, we did include some tortilla chips with ours. And a little bit of shredded cheese (though it wasn't really necessary. ...i know. Hard to believe about cheese).

One more thing. That 7 servings bit is totally false!! I'd say to double it if you have 3 people eating. It was enough for me & Brad but there is a TINY bit left in the fridge. Not even a full bowl! SO yeah... might want to double that. =)

Nutrition info: White Chicken Chili - calorie count
(Nutrition info is based on how i cooked it, so it includes 1 can of beans & no chiles.)
Hope you enjoy!