a movie, some dinner, bookstore & yogurt! 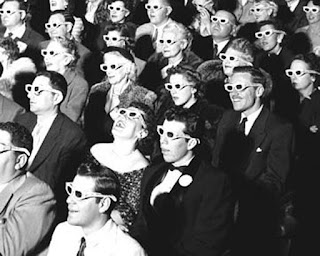 Last night we saw Disney's A Christmas Carol at the movies. It was great! We loved it! This is the one with Jim Carrey as Scrooge. If you haven't seen it, you really should! We loved it! Silly us, we had no idea it was a 3D movie! One of those where you have to wear the glasses! Neither of us had been to a 3D movie before! Well, i think i saw a short thing at Disneyworld once, but that was years ago! And it wasn't a full-length movie! We thought it was really cool. The previews were really cool, too. Loved it! 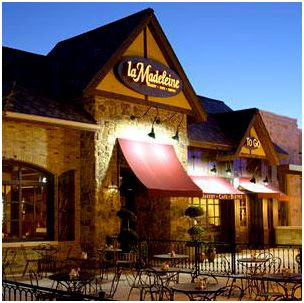 After the movie, we went to have dinner at La Madeleine's. Have you been there? We have two here and we LOVE it. The location at Perkins Rowe is my favorite. Perkins Rowe is a new-ish area here - it lots of shops & restaurants & a movie theatre all together in a very cute area (looks like a great place to take cool photos, too!). Bally Fitness is there, too, and the Neuromedical center. Apparently there are businesses & condos upstairs as well (I would never want to live there, though! Cute as it is, it must be SO noisy!). Anyway, i love the area. So La Madeleine's is right next to Barnes & Noble & the movie theatre is right behind that. It's a neat area. Back to my story! We had the Potato Soup at La Madeleine's & it was delicious! Then we walked next door to Barnes & Noble (good thing it's all close together & mostly covered - it was still raining last night!). 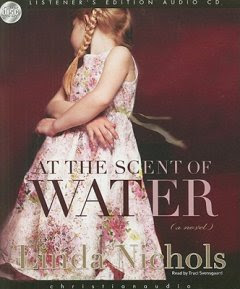 I bought this book at Barnes & Noble. A couple weeks ago, I saw a Linda Nichols book at Books-A-Million on the bargain shelf for almost 4 bucks! I got it, thinking that even if i hated it, it was only 4 bucks! Well, i LOVE it. It's called "In Search of Eden" & it is very good! I love all of the characters & the story. I'm about  halfway through & i'd recommend it to anyone! So i picked up this book, "At the Scent of Water" last night to read when i'm done with her other one. These are very different from my usual chic lit obsession - more of drama/suspense with a little humor mixed in. I'll let you know how this one is! But the book i'm REALLY excited about... 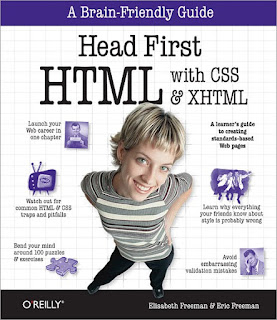 ...is this one! Yeah! I have been very interested in learning more about HTML & all that for quite awhile now. I like figuring it out & putting it all together. It can be frustrating, but once you know a code, you got it! It's really cool to me! Before, i was asking for the book "HTML for DUMMIES" so i compared that one with this one while in the store. I really like the way this one is written the best! Very easy to understand! I'm super excited about getting started! Maybe i'll be designing blogs & web-pages one of these days! How cool would that be?! 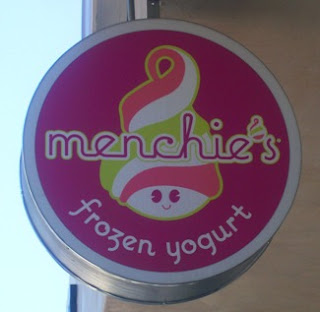 We were done & ready to go home. But as a last minute idea, we set out to find a yogurt bar i had heard about. I had seen the ad a lot in 225 magazine (a really cool free local magazine we have) & knew it was near the Mall of Louisiana (which is on the same road as Perkins Rowe, where we were). Since we're rarely in that area, we decided to try it out! It looked so cute & cool. & I'm not a big ice cream eater, but i like frozen yogurt! Chocolate Vanilla swirl = the best! All i knew was that it was a purple logo & had a cute name & was somewhere around the mall! HA! But we found it! Menchie's Frozen Yogurt.
Ok, i hate to say it - but the yogurt was not good. It's sad, because it is a VERY cool place. Loved the set up & all that. It's a self-serve yogurt bar. You go in & there's a wall of the yogurt. You get your cup, fill it with your yogurt of choice & then there's a wall of toppings & you top it yourself. Bout a zillion different toppings. Then you weigh it & pay for it! 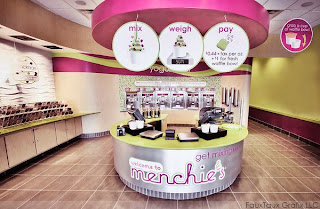 Here, the toppings are first. kinda backwards. but you get the point. =)
It was super simple, mix, top, weigh, pay & you're done! BUT it was not that yummy. I got vanilla/chocolate swirl & added a few mini-recees cups. Brad got the same & added chocolate chip cookie dough on top. I was putting the swirl in my cup, but once I saw how DARK the chocolate yogurt was & I did just plain vanilla the rest of the way. Their chocolate looked kinda scary! & i was right. It was OKAY, but it wasn't all that great. I have a feeling that their fruity yogurts are better & they had more of those. Hopefully so, because I'd hate for such an adorable fun place to have yucky yogurt!! I ate my vanilla part & that was it. Handed the rest to Brad. He ate it all & this morning, he had a tummy ache. YUCK!

We were a bit amused by the workers! There were about 6 of them (too many for such a small place!) & they were all probably college freshmen. They were ALL eating the yogurt - one was finishing hers & went back & got more vanilla & sprinkled crushed Butterfinger all over it! I was like "WOW. They are gonna get more than Freshman 15 working here!" HAHA. They were just eating it like crazy & were all hyper & excited about it! The ice creams had logos at the top of the machines to let you know if it was low-fat or sugar-free or whatever. But no matter how "semi-healthy" for you it is, i'm pretty sure crushed butterfinger compensates for it! HA. (Not that i have room to talk... but we got the impression that they eat that junk all day while they are at work! LOL!)
SO that was our evening! We had a great time! Love weekends!

Posted by Melissa at 11:01 AM
Email ThisBlogThis!Share to TwitterShare to FacebookShare to Pinterest
Labels: BlogBook, Books, Date, dinner, movies, weekends