It is so cold here!! & I have been home the last two days SICK. BLEH. I hate being sick. Last January was the sickest I have ever been in my life - this had better not be a repeat! Right now it's just a cold, with lots of cough, sore throat & chest congestion. Today I didn't eat all morning & was starving but we have nothing to eat. Nothing. And i would've done ANYTHING for some soup. Well, anything but get out in the cold rainy weather!

I FINALLY got out to the store, feeling like crap, just to get the stuff to make some soup. My throat is KILLING me.

I ended up making Baked Potato Soup, my hubby's favorite! I used a new recipe & it turned out pretty good! But not the best. I think I shall keep trying potato soup recipes until i find the one most similar to La Madeleine's Potato Soup. OMG, it is DIVINE! (though it can't be too healthy! Cream & cheese & potatoes, oh my! Well, perhaps for special occasions, like hubby's bday (you know, since it's his favorite. Though his bday is in June. Might be a little hot for Potato Soup in June!)). 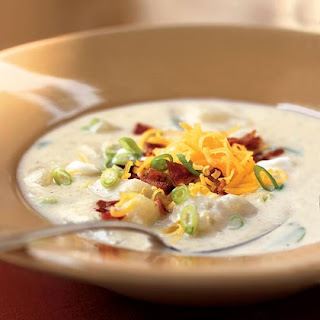 Baked Potato Soup
Better Homes & Garden's Cookbook
2 large baking potatoes (about 8 ounces each)
6 Tablespoons thinly sliced green onions
3 Tablespoons butter
3 Tablespoons all-purpose flour
2 teaspoons snipped fresh dill or chives or 1/4 teaspoon dried dill (i did not have this)
1/4 teaspoon salt
1/4 teaspoon pepper
4 cups milk
1 1/4 shredded American Cheese (we used cheddar; just because we had a ton of it already.)
4 slices bacon, crip-cooked, drained & crumbled (or you can just get REAL bacon bits, it's easier)
1. Scrub potatoes with veggie brush, pat dry. Prick potatoes with a fork. Bake in a 425 degree oven for 40-60 minutes or until tender; cool. Cut each potato lengthwise. Scoop out white portion of each potato. Break up any large pieces of potato, set aside. Discard potato skins.
2. In a large saucepan, cook 3 T. of green onion in hot butter over medium heat until tender. Stir in flour, dill, salt & pepper. Add milk all at once. Cook & stir for 12-15 minutes or until thickened & bubbly. Add the potato & 1 cup of cheese. Stir till it melts.
3. Top each serving with the remaining green onion, cheese & bacon.
Side note: it could use more seasonings - once we added a bit more salt & pepper it was great! Of course, i didn't have the dill, so maybe that was why. Also, it was a little too thick for us, so we put in an extra splash or two of milk).
It turned out great! Enjoy!