Last night was opening night for The Elephant Man. It went soooo well! I was very happy. I did a lot better on the light cues & everything went smoothly. One actor missed a line but another actor skipped right over it & it was smooth sailing - the audience would have never known. All in all, it was a fantastic night & one the cast, crew & production team should be proud of! The audience seemed to love it - there were lots of familiar faces & they all raved about it - everyone i talked to at least!

ANYWAY. I was really excited because a writer for 225 magazine was there. 225 magazine is a great local magazine that is free - & honestly  i would pay money for it. It's thick & glossy & has TONS of GREAT articles & fantastic photos about local stuff. I read it cover to cover! Anyway, she came once during rehearsals & once during tech week & she hung out backstage last night. So they are going to do an article on what it's like backstage & i'm really excited about that!! I know they'll do a great job showing our city what goes into a production & how fun it can be!

After the show, we had a little opening night party like they do for every show. The cast, crew, & audience stay awhile longer & they have food catered - last night it was from The Jambalaya Shoppe - YUM! I was told i called a great show & that i should be very proud. It made me feel great - because this was the hardest straight play i've ever had to call cues for! It just went really well & i was pleased!! Here are some pics from last night... 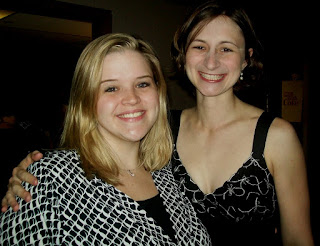 This is me with Emily, our amazing lighting designer. Seriously, she should be very proud of this show... she made bold beautiful choices & the show is even better because of her work! She also has taught me TONS of stuff about the light board. I love this girl!! 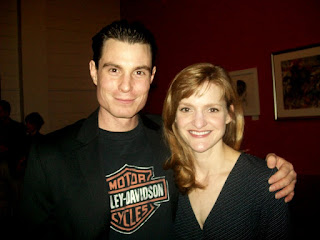 This is Matt & Sharon. Matt plays John Merrick aka The Elephant Man. I am so proud of him it's ridiculous. I worked with him in Arcadia in 2007 & i cannot even tell you how much he's grown as an actor since then! He should also be extremely proud of this show. Sharon is so sweet! This is my first show with her & i love her! She's so funny & her facial expressions on the stage are hilarious! She is a brave & smart actress. 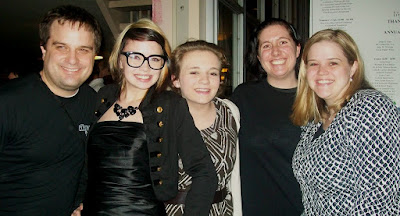 This is me & my crew! Robert, Mika (who both are doing backstage & the fly's), Chelsea (who is running sound) & Valerie (my ASM - Asst Stage Mgr). I do not think i could have asked for a better crew. They're doing it all perfectly! & Valerie, wow. This is her first time to ASM but you'd never know it. This would be a much more stressful process for me without her! 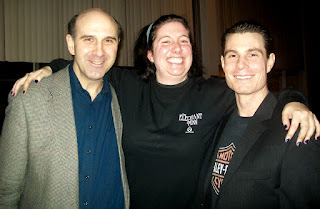 Valerie & Matt with Mike. I've done lots of shows with Mike & he's always a pleasure to work with. He does a fantastic job & is hilarious! He's playing Ross in the show.

Posted by Melissa at 11:04 AM
Email ThisBlogThis!Share to TwitterShare to FacebookShare to Pinterest
Labels: BlogBook, BRLT, Stage Managing, Theatre