Okay, anytime i blog about theatre - i mean SOLELY about theatre - i get ZERO comments. But i get comments on all my other blog posts. So i think this means that none of you are interested in theatre. But it's my DUTY to get you all some culture!!! So, i'm writing about it again!

I'm just kidding. But really - i have to blog about this show. Because... i am SO excited about it. It is really good. I had no idea when i signed up for this, that i would love this play so much. i mean, sure. I fall in love with all of them to a degree. Even if i hate the script. Because you are watching it progress, & you "get" the story more & more... so even the plays that are my least favorite - i still haven't hated them.

This one is...THE ELEPHANT MAN. And it is REALLY good. Way better than i expected. I agreed to it because (1) i LOVE to stage manage shows & (2) i like stage managing PLAYS better than musicals. I love musicals, don't get me wrong. But i do better ASMing (Asst Stage Manager) the musicals - or performing in them! - & SMing the plays. Got all that?

And then! They added lighting. Oh my gosh. My sweet friend, Emily, who is the ATD (asst technical director) there did the lighting design. It is a BEAUTIFUL show! I had no idea they were going to do it so DARK - but with lighting - but mainly it's dark - it's beautiful. When we do production photos, i will show you. The director was taking pics last night & i noticed he had a Canon Rebel - woohoo - i know from some of my blog friends that those cameras take great pics! So those are to come...

ANYWAY. Tonight is preview night!!!! Preview night is "technically" dress rehearsal. The last one. They warn the audience that if the show needs stopping, it will be stopped. I have done a bunch of shows & of all of them only one was stopped: CATS. And that was due to technical difficulties not the actors or anything! But we do have an audience for preview. Basically, the cast & crew get tickets to give out to family/friends for a free night. But opening night is not till the NEXT night.

So anyway. Tonight is Preview. Now. I don't know if you know what all a Stage Manager does. And i won't get into ALL of it right now! There's a ton of stuff they do during the rehearsal process. But as for the actual performances they do what is called "calling cues". This just means they have a bazillion markups & stickers in their script, neatly telling them when each light cue goes, when each sound cue goes, when each fly comes in or goes out. Got all that?! So, basically, during a show, i'm on headset & i say "standby light 14.....light 14, GO!" The GO is when the button should be HIT. Or i'll say "standby sound for Train Sound" & Chelsea in the soundbooth will say "standing by" & then at the precise time i will say "GO!" & she does & yay - train sound on stage - this is how it all works. Backstage work is not easy!! But it's not HARD once you get the hang of it. Some plays are easier than others.

The most light cues i've had for a play: 45, i think. Guess how many i have for this one? 103. DANG. So yeah. There is not a dull moment. The play is only an hour & a half long, no intermission. Now i don't actually have to call my light cues - since i am the one running the light board! (I'd be calling it to myself!) But i do have to call the sound cues. Though Chelsea has it pretty good! If i miss it, she probably won't - but that's just how it is done.

And then backstage. My ASM, Valerie, is backstage with our awesome crew: Mika & Robert. Thankfully, Valerie's got it going on - she knows exactly when to do each fly. So really - mainly - for this show, anyway, I mainly gotta worry about lights. However, if anything goes wrong - it all goes back to the stage manager. because once a show opens - & i don't know if you know this - but the director is done at that point. At that point, the SM is in charge. And responsible. EEK, right?!

But it's fun! I love it! I got into this to perform - & i still love to perform & i actually miss it right now. BUT - somewhere along the line i was pulled into the backstage part of it & i miss them both. It seems that when i am not doing a show at all, i miss stage managing. But when i am stage managing a show, i miss performing! HA! I love it all.

It's really fun & exciting & very cool. Anything goes in a live performance - you don't know what will happen! Sometimes that means it's a scary moment or a OH MY GOSH WHERE IS ACTOR SO & SO when the other actors are left on stage ad-libbing...that would be call "missing a cue" or "missing an entrance" - yeah - i did that once - it was awful. We missed more than our entrance...we missed our entire SCENE. That was the worst ever. That was my first year of theatre & man - i still am horrified to think of it!!!

ANYWAY. I don't know why i got into all that! But i did. Because i enjoy it. I LOVE it. It is wonderful! It is fun! Thankfully, i have a hubby who understands, as he is a musician. He knows that i HAVE to do theatre just like he HAS to do music. It's in our soul. It's our passion. I do it less than when i was single, because honestly - it takes over your life. It varies, depending on the director, but typically rehearsals are Mon - Fri from 7-10. Performances are usually Thurs, Fri & Sat nights at 7:30 and Sunday matinees...sometimes 2 shows on a Saturday! ACK! Musicals run longer than plays. But i love it!!! SO when i was single, i did every show back-to-back. Now that i'm married, i do a few shows a year... like, i did in 2009 i did a very short (2 week) play called The Vertical Hour & then took a break until i ASM'd the summer musical THE KING & I. And then i took another break until this one. SO that's two shows in 2009. This is my first in 2010 & i've also agreed to ASM the summer musical, The Sound of Music. But that ends this season & next season hasn't been announced, so who knows after that. i really treasure the breaks now b/c i am not kidding you - i miss brad SOOO MUCH when i'm doing a show!!! Of course, when i become a parent - it'll be even less. But i'll still get to do it - especially as the kiddos get older! There are parents that do it, but it is definitely a balance.

And if you're wondering - no, i do not get paid! I do it b/c i LOVE it. So do the actors. its' called 'paying your dues'! Some people think that is crazy...but I couldn't live without it. Typically, community theatre doesn't pay (except the on staff people, costumers, directors, etc). Semi-pro theatre (which i've done before) & Professional theatre pay their stage managers & actors. So that's cool. Would LOVE to get paid for it so i could quit my day job!! SIGH. Maybe one day! ;) But i do love community theatre!

ANYWAY. So tonight is preview & tomorrow is opening! & we run for three weekends.

And i love this show. Did i mention that? It is a beautiful true story about a real life man, John Merrick & his deformities & how that left him alone & friendless. "His body is hideously deformed, but within is a remarkably sensitive and intelligent being. Merrick is befriended by an ambitious and brilliant young surgeon who looks after him in his last few years finding him a home in a London hospital where his presence is shrewdly used for fund raising. He is later introduced to high society, becoming dependent on the success his deformity brings him. A well known actress tries to ease his loneliness, but her efforts are thwarted by hypocrisy. Even those who love him can't help him and ultimately he dies from his horrible affliction. I think we can all learn something from him - he's just so innocent & has not become bitter." (from the website).

Believe it or not, the actor is not using makeup or prosthetics of any sort. He will be in an awkward body position, portraying those movements...but no makeup will be used to show the deformity. Broadway has the actor do it this way as well - it's the idea of showing the audience the person that was within. It's an amazing story & the actors are all doing a terrific job in portraying the story. If you're in the Baton Rouge area, you should really come out & see it. You can buy tickets here.

I was really sad i couldn't find any pics of me on headset!!! Or you know - doing something stage manager-ish. I guess those times i'm a bit busy & so is the cast & no one is snapping pics?! But anyway. Here are a few shots of me & good theatre friends over the past 4 years... I'll get pics up of actual Elephant Man stuff later - but wish me luck tonight! Actually, don't. Don't you know it's bad luck to say Good Luck!??!!? =) 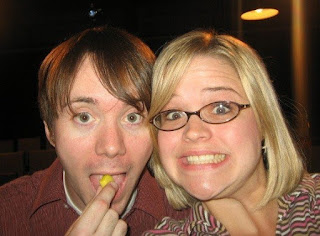 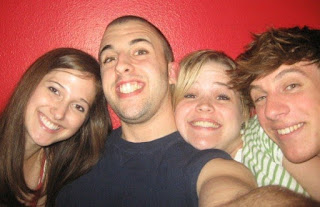 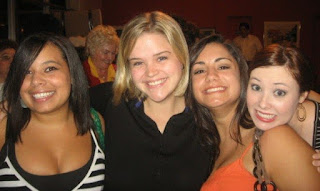