Just a little bit of randomness...since i have tons to mention but nothing that would take an entire post!

First, i got a promotion. But i think we've been over that. =)

Second, if you don't read my weight loss blog, you need to know that yesterday - same day as the promotion - i wore a size smaller top & a size smaller pair of pants. WOOT!

Third - i cooked a new meal last night. But i'm not blogging it.It was gross. Ok, it wasn't GROSS. But i didn't love it. I mean, hubby liked it & will probably finish it off. But i will not have any more of it. It was TACORITOS but they were really just Enchiladas. And i think if i took out the beans & added more meat - or did chicken instead of ground beef - i think it may have been good. But not GREAT. It was a Taste of Home recipe - a "grand prize winner" - ummm, REALLY?! I don't think so. I followed the recipe exactly. & it wasn't that great! It didn't deserve a blog post & it's not getting one! Blech!

FOURTH...We got a bad review for The Elephant Man. I am not upset (though at first i was). You know why? Because our stupid silly newspaper sends a sports writer to do reviews! WHAT?! I mean - maybe they think if a sports writer likes it then it's the ultimate compliment? That's what my husband suggested. But seriously. I mean, i have nothing against a sportsy person doing an artsy review - IF they actually LIKE the arts! But i have to wonder if he even LIKES theatre?! I don't know. The thing is, he never gives a good review. And really - i'm not a sore loser - but we do good theatre. Top notch! We don't suck, is all i'm saying! And seriously. I've seen some shows there that i didn't LOVE. I've worked a couple of shows that i didn't think were all that fantastic. But i've also worked a lot MORE shows that were REALLY REALLY GOOD. And George Morris NEVER gets it. Ever. We always get either a bad review or a summary of the show with maybe one comment of "so & so did well". A summary is really not necessary - i mean, a summary of the show comes in the article that comes out the week before we open! But if he hated it, he gives a bad review. UGH! I really thought he might like this one. Because it is GOOD but it is not something that is so artsy fartsy that a general audience wouldn't get it. I mean it's a true story. And it's a beautiful story. We did have a lot of slow moments on our preview night, but not any other night. And he was most likely there Saturday night which was a great show! So i don't know what his problem was. I mean, he titled the review "The Elephant Man Misses" & i seriously wanted to write a letter to the editor & title it "George Morris Misses" because he just did.not.get.it. I mean, he even fussed about us not using prosthetics or make up for the elephant man! Which is how even Broadway does it & is at the request of the playwright! But whatever. I'm just venting. =)

Seriously - i am in love with this show & the actors in it are doing a wonderful job!! I hate when there is a bad review, because the actors are really discouraged & the energy is lower when the next show comes. But i think this group of actors is a lot more professional than that, so it should be okay! 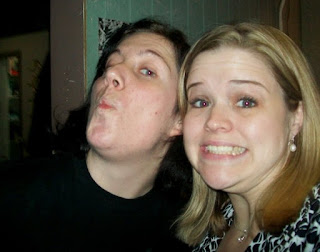 Me & my ASM, Valerie. She is rockin her first time as an ASM!! 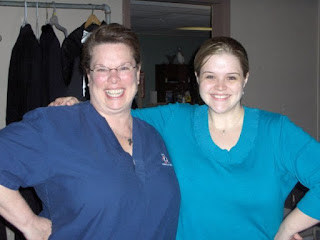 Me & Kelly, she helps with quick changes & such! I'm so glad to have her around!!
Anyway, things are going well & i really really have more to blog about - other good things going on! Will do that soon!!!
Hope your week is great! If not, hang in there! Tomorrow's Friday!