Well, you know since i did my idol recap of the girl's last night, I've gotta do it for the boy's tonight. I'll keep it short & sweet this time! 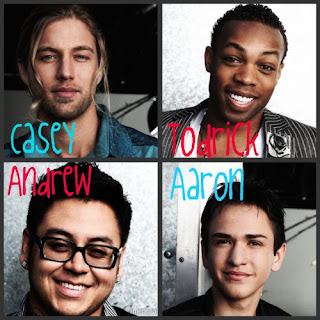 Those are my favorites. Casey, Andrew & Aaron have been my favorites since the beginning. Of course, Casey is a hottie. But he's also got pipes! I like him a lot.
Andrew did well tonight in my opinion (despite what the judges said) but I will never forget when he did Paula Abdul's "Straight Up" & made it his own! LOVED IT. He's got an interesting voice, i like him.
Aaron is adorable. SUCH a humble guy. Tonight was not my favorite of him, but he was SUPER nervous. His first live performance ever!!
Now, Todrick. WOAH. I've liked him since the beginning but tonight he became a favorite. When i heard he was doing Kelly Clarkson's "Since You've Been Gone", I was like UHHHH... YIKES?! But it was GREAT. VERY CREATIVE. Now, i agree with the judges that he shouldn't have made it THAT different - so different from the original that you don't even recognize it - i mean, if it weren't for the lyrics, you would never know that's what he was singing. HOWEVER, it was still extremely creative & i like him a TON. He's awesome.
It kind of annoys me how ALL last night the judges sounded like a broken record saying, "you've gotta make it your own" & all that. And then this guy completely rearranges a song & totally makes it interesting & fun & cool & they diss him. Give me a break. I agree that he changed it TOO much but it was still awesome & he took a risk. The judges tonight were annoying. Well, Simon i mean. I usually like him, but good grief. Kara is my new favorite judge. I like Ellen too & I like Randy more so than in the past. Simon - tonight was in one of his moods. UGH. 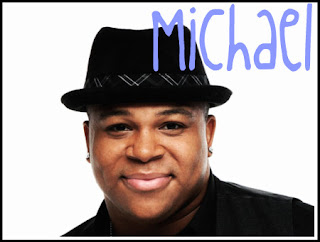 Those 4 should be safe! There were a few others that were okay. And i also love Michael Lynch. His performance tonight was decent but he's done better. I am glad Ellen told him to be careful about getting a big head because i've been wondering if he's getting a little conceited?? Maybe not, though; he seems totally sweet. Anyway, i heard the other day on the radio that this week they may be announcing that he has to go home. WHY? Apparently his dad leaked to the local newspaper there that Michael made it to the Top 24 - before it aired. BIG NO NO! They have to sign contracts & everything that it will remain confidential until it airs. I would NOT be happy if my dad did that!!! But then tonight he sang & he's still there, so maybe they're letting him stay. I mean, it's not his fault his dad did that! Then again, if they let one person get away with something like that then they have to let someone else. When they announced that on the radio they said not to feel sorry for him because he's already being picked up by a record label. HM. Interesting to me they didn't announce this yet. Maybe tomorrow on the results show?
So that's my recap. There were some others that were good enough & then a couple that were awful. The two i think that should go home are Tim Urban & Alex Lambert. I don't know if they will go home, but to me - they are the weakest links. The other's left are okay.
What did you think?
Posted by Melissa at 9:50 PM
Email ThisBlogThis!Share to TwitterShare to FacebookShare to Pinterest
Labels: TV