the history of my nickname(s)

This started out being a random post. And then i was talking about me & Brad & then i had to explain why it says MEL & not MELISSA on the below picture. So then it just turned into a really long unnecessary & RANDOM post about how MEL became my most used nickname.

Really random. But maybe you're curious. 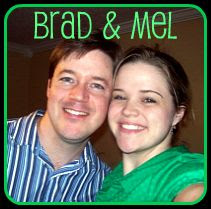 Yesterday was 2 years from the day that Brad & I became an official couple. Doesn't seem long (considering now we're 15 months married!), but you'll understand once you read our love story (see sidebar - but it's even longer than this post...). It's crazy to me that it was 2 years ago that we went to Carraba's & stared all lovey dovey at each other. It pretty much marked about the time i knew that i knew that THIS.WAS.IT. And i have to tell you - we are still VERY happy. Marriage has not become boring or mundane in any way. We are two very happy lovebirds. We love being together all the time. There has HONESTLY not been a day where i'm sick of him or wishing i could have one day of single time. NO WAY. I love married life. I told someone it's like a constant sleepover with your best friend (especially at night - because i get really giddy & delirious around bedtime, just like a 12 year old)! We are having a great time. I know you say we're only 15 months into it, but you have no idea how many people said the first year is the hardest & that it'd get mundane. This has not happened for us & while i do understand that there will be tough times throughout any marriage, i'm thankful they haven't hit us yet.
I am not saying we've been trouble-free! Of course we've had some disagreements & things that we had to talk through - but those things were worth talking through & fixing! It's important! And even during those times - there were no fights or yelling! And i know there will be times where maybe we want to rip each other's hair out - but the point is, those times have not happened yet. We're in a really good happy phase of life & i would love for it to stay that way as long as possible! Though our marriage has settled into something deeper than the goofy love that happens right at first...we still want to kiss & hug & say "i love you" all the time. We're enjoying each other.
SO YAY for MARRIED LIFE TO MY BEST FRIEND!

I made the above picture of Brad & I just playing around on Picnik & that was within the first weeks that we were "official". Now, just in case some of you didn't know I am called MEL at least as much as I am called Melissa! I realized some of my blogger friends didn't realize that when i recently posted a picture & said that theatre friends called this the "Mel Face"! (see my button - that would be "the mel face"). Anyway, i realized then that many of you do not know that MEL is what i am called as much as or maybe more than MELISSA! It is so crazy. I never had any nicknames at all until my twenties. And i hated that i didn't have any nicknames. Occasionally my mom or sister would call me Lissa but that was it. Then, when i was 21, a friend called me Mel & it stuck. I mean, REALLY stuck. Because here it is ten years later & i'm still being called that. For awhile there, Mel was ALL i was called (except by family) to the point where i was even introducing myself as Mel. It was really wierd when i started saying "hi, i'm mel" - i did it on accident but it was because i was referred to as mel more often than not. I'd say i was called Mel the most from age 26 to 29. At that time i had an overabundance of nicknames: Mel, Lissa, Lizzer, Lemissa (by brad's sister, being silly), Melbelle, Melraye (with my middle name), Melicious (rhymes with delicious...yeah), Melba, etc. Basically any word you could make out of mel or lissa! HA! Also, a lot of my theatre friends had gotten into the habit of calling me "MEL P" which was my last name's initial.

But when i got together with Brad, his family had known me my whole life & they definitely couldn't get used to Mel - b/c they were like family. So then Brad & his family (plus my own family) called me Melissa. And then when we got married, well then my new last name was Venable. And so theatre people didn't think Mel V or Mel Venable sounded quite the same as with my maiden name. And plus i liked writing MELISSA VENABLE more than MEL VENABLE. & so it's kind of back to Melissa. Except, i'm still called MEL. It's just lessened a little. Maybe half & half now, i guess. And that's good with me! Seeing as how i'm a grown up now & all (am i really a grown up?!). HA.

So there you have it. The history of my nickname. HA.

And i guess that's it, really. This post is long enough as is!
Posted by Melissa at 12:05 PM
Email ThisBlogThis!Share to TwitterShare to FacebookShare to Pinterest
Labels: BlogBook, love, Marriage, nicknames