I live in Louisiana, where we have Mardi Gras. I think i was in my teens when i realized that they don't celebrate Mardi Gras everywhere! Who knew?! I love that we have Mardi Gras. Now, a lot of protestant Christians do not celebrate this holiday - they think it is immoral. But I do not believe that Mardi Gras in itself is immoral. It's just unfortunately the way some people act during Mardi Gras. If you're curious, you can read a ton about the history of Mardi Gras here. And this is a really good place to read about how all the foolishness is not actually a part of the Mardi Gras tradition. =)

I don't really celebrate Mardi Gras just because i don't like parades. Not my thing. They do have plenty of family friendly ones. But i just don't like going to parades! No matter what it's to celebrate! 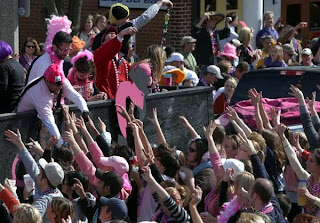 Most people in LA do not understand this. But parades are no fun to me! (Lucky for me, Brad hates parades as well.) Standing around in the crowds & the heat (well, not heat this year!) trying to catch beads from people? i will pass, thank you! The only time i enjoyed a parade was a downtown Christmas parade & that is because i was in it. The cast of A Christmas Carol had a float. Let me tell you - it is MUCH more fun being ON the float, throwing things! (Although i think i knocked someone out with a bead! Oops!)
Why do i LIKE mardi gras? Two reasons. One, we get another day off work! YES! Actually, many get TWO days - Monday & Tuesday. I just get the Tuesday (tomorrow) & so does my hubby. But hey! I'll take it!
The other reason i love Mardi Gras?
KING CAKE. 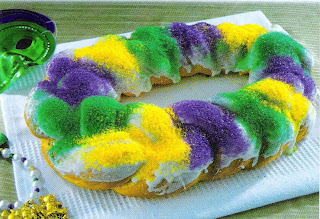 Oh, my dear Lord, it is AMAZING. AMAZING. The best stuff EVER!!!!!
They sell it everywhere this time of year. Grocery stores & bakeries. The best is from Ambrosia Bakery. The king cake can be plain or with filling. There's about a zillion different fillings to choose from. My favorite is Prailine & Cream Cheese filling. I do not even LIKE prailines, but the way they do it is perfect: a very thin layer of prailine & a thicker layer of the cream cheese. It is AMAZING. Now, i'm trying to lose weight so i've only had one tiny sliver of king cake a few weeks ago & i may have one more piece (maybe - if someone buys a king cake)! But that's it. But still. It's phenominal. And i think you should all order one from Ambrosia. They ship!!!


Have you ever had one? They tell me this is only in Louisiana & that makes me sad. Everyone should have a chance to try King Cake. Hopefully they make them this good everywhere. Simply Divine! (Thankfully it's just one time a year!)
So, happy Mardi Gras everyone!
Posted by Melissa at 1:39 PM
Email ThisBlogThis!Share to TwitterShare to FacebookShare to Pinterest
Labels: BlogBook, holidays, Louisiana, Mardi Gras