I feel the need to do an American Idol recap every time it airs. I'm really sorry about this. I know some people are not as into it as i am. So just feel free to skip this post if you need to. I will still love you. ;)

Tonight was disappointing. And, ya know, that happens a lot if i'm remembering right - the first few live shows are never that great. You go on & on about how amazing they are & how this is the best season ever & then you get to Top 24 & you are a little let down.

Tonight i feel like the sound was off - & i don't mean just the singing. The singing wasn't mixed right with the band & the background vocals. The background vocals were too loud, the band was too soft, the contestant was somewhere in the middle. Some of them sounded TERRIBLE, but i'm telling you - when you are doing a live performance, if all those factors are into play, & you can't hear yourself in the monitors (which i highly suspect) & you are nervous as all get out - you are bound to not sound your best. Alicia Keys wouldn't sound her best in those circumstances. If you can't hear right, you can't sing right. It's not going to happen. I am not trying to make excuses for them - i just sometimes understand how they feel!

I hate to say some of the things I'm about to say, because i do NOT want to sound like i think i know it all. I don't. I do sing & i have sung on stage, live, a hundred or so times. I have led praise & worship in church a few times, but I sang backup a lot more. I have had solos in musicals. And i love to sing. I love to sing alto, mostly. I love to harmonize. If i sing a solo, I pick songs by Nichole Nordeman or Crystal Lewis. Their's are the ones i do best. If i were to go on American Idol, i would not try Mariah Carey, even though i adore her voice, there is no way i could match it (even if i almost can in my car!). I'd likely try Sarah Barreilles - & it wouldn't be her hit single! I don't know why they pick songs that are too big for them! And i agree with Simon - they are always picking songs that they think would get them to the next round... not the ones that reflect them most & that they sing best. It always bites them in the butt, too, because the best ones are always the ones that choose the right songs, that choose the songs that have meaning to them. It resonates with those who watch. Just singing isn't going to do it because there's not any authenticity to it. And it is not that hard to do (pick the right song, i mean. at least, it shouldn't be. I think they make it harder than it is).

I love when Brad plays the keyboards & i sing along. But if you heard me sing, i don't know that you would be like "WOW. SHE IS AMAZING." No one has ever said that to me. But i can sing correctly & i do give it all i've got. Unfortunately, my nerves VISIBLY mess with me. I get so nervous that you can HEAR it in my voice & see it in my shaky legs & the shaking microphone! HA! NOT when i do praise & worship. But when i do a solo or an audition.
I would never go on American Idol because I do not desire to be a singer. I want to be an ACTOR. That is my thing (even though i've been singing a lot longer). I don't desire to stand on a stage and entertain people as myself. I'd rather become a different character & explore that character - i come out of my shell on stage as another character. As myself, i sometimes get in a quiet little mood & not in the mood for company. HAHA - I would never want to do interviews & i'd often not be in the mood to go entertain a crowd. (Now a background vocal - THAT would be fun!)

ANYWAY. I don't know why i went into all that. & i hope it didn't sound braggy b/c i'm NOT a brilliant singer or anything! But i do want to be able to talk openly about my love of music & theatre. Tonight was a disappointing night on American Idol - but I just see more potential in some of those kids than what they are showing on that stage. I agree with the judges a lot - ESPECIALLY Kara.

The recap. My favorites, as always, are Lilly & Crystal. Lilly did AMAZING tonight. Crystal did well, but it was not her personal best, in my opinion. They are both refreshing because they are both ORIGINAL. And real. And, oh yeah, their vocals ROCK. 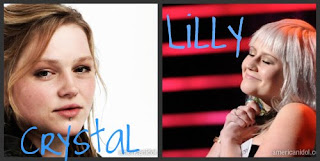 2 others I really enjoyed tonight were Katie & Siobhan. I didn't remember Siobhan at all. But she was great tonight. Katie, well, she's 16. She has a fantastic voice but you know 16 year olds... she kinda annoyed me. But she did not annoy me tonight. The judges thought the song was too old for her. I disagreed, but it was Michael Buble. I adore him & his music & i don't think of it as old. But yeah, it kind of is. I thought she did great with it! 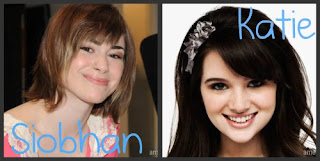 Please forgive me if you loved Katelyn - i missed her song! =( My mom thought she was terrific! Two girls go home on Thursday. Who do I think it should be? Well, based on tonight - Lacey & Didi. But again, i could barely hear the band so a large part of it was the SOUND. It is hardly the singers fault that i couldn't hear the band! Ashley was my #1 favorite at the initial auditions but she was a bundle of nerves tonight! I hope the above 4 will stay (& think they will, except maybe Siobhan. She wowed me tonight, but i didn't remember her at ALL before that). Other than that - it will not bother me too much if any of them go home, except Ashley. I hope she gets another chance because i know she can do better than that!
Ok, so there is my very very long summary of tonight's show. If you're still here. ;)
Posted by Melissa at 11:30 PM
Email ThisBlogThis!Share to TwitterShare to FacebookShare to Pinterest
Labels: BlogBook, music, TV