WARNING: The author of this blog post may not at all ever agree with anything the judges of the American Idol competition say. EVER. In fact, her opinion this season may go in the exact opposite direction of what the judges say.

Post #2 of my thoughts on tonight's idol. It was interesting. I kept getting so mad at the judges & ended up muting it while they were speaking. I watch this show to see potential artists & to see them get better & better & to hear them sing & root for them. I do not watch it for the judges. I used to agree with everything they said, just 2 seasons ago (i didn't watch last year). Tonight it was like we weren't even watching the same show. They are RIDICULOUS. They were WAY too harsh on Didi, even though she is not my favorite, it wasn't a disaster. They were sweet to Michelle, who i thought did AWFUL. And they made a HUGE deal over Siobhan & i thought that was the TOTAL WRONG song for her. But what do i know, right?

I started muting it during Randy & Simon, then later I just muted during the whole time the judges were talking. Though it's like when you're watching a horror movie & cover your eyes but keep peeking... yeah. I kept unmuting to hear what they were going to say - then getting so mad & hitting that mute button again. The judges SUCK.

Anyway. I thought the girls were better tonight, overall. My opinions of the girls changed just like the guys.

And you know - i googled to see why Crystal had been in the hospital & it said Diabetic Complications. Yikes. But one article said that's why they switched it to where the guys sang last night... I thought the producers were just doing that to shake things up, but it was actually to give Crystal another day of rest.

My thoughts from tonight... I'll do it just like i did last night. Least favorites to favorites. But it may seem like a wierd order, because some of them i like OVERALL better than i put in this list, but this list is based on TONIGHT (as much as possible). Honestly, i have NO IDEA who will go home, because i have a feeling America is more divided on the girls than the guys. 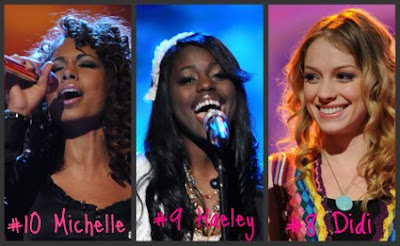 #10 - I just thought she sounded terrible. Sorry. :( She's gorgeous, though!
#9 - I actually didn't HATE Haeley singing The Climb. And i think she is an absolute DOLL. But, i totally agree with Kara on this one. I had actually said to Brad after she sang that she should come back in 2 or 3 years & i bet she will be AWESOME. And then Kara said basically the same thing. It's true. She does have a good voice, but she is very pitchy. I think she just needs some more vocal training & maybe a little maturity. But i love her sparkly-ness & her smile.
#8 - I got SO mad at the judges with her. Didi has never been a favorite, but it wasn't "excrutiating" as Randy said & it wasn't "a mess" as Simon said. I actually liked a good bit of it. Other parts were bad, but i thought they were a little extreme with their harsh criticism. Especially since Michelle went next & did 10x worse & they were sweet as pie to her. They critiqued her, yes, but they were so much nicer about it. There is no need to get THAT mean. And it wasn't THAT terrible. Yes, she's in my bottom three because i didn't feel she was the best. But - she still has a great voice. I felt SO bad for her when the judges were talking to her - i could just FEEL her face getting hot. And then she made me cry when Ryan was talking to her because she was trying sooo hard not to cry. Gosh.
Next... 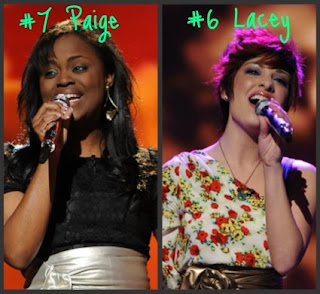 #7 - I think Paige is actually a better singer than a lot of the others, i just didn't like it tonight. I did not like her singing a rockish song & i didn't like the way she changed it up. It WAS cool, however, to hear that Kara wrote "Walk Away", i didn't realize that. I used to turn up this one part back before Brad came along...
"I want a man by my side
Not a boy who runs & hides
Are you gonna fight for me
Die for me
Live & breathe for me
Do you care for me?
Cause if you don't than just leave!"
Yeah i used to turn that up, way up, because that is what a girl wants: A MAN who will stand up for you!!! (Thankfully, i found that!)
Ok, back to the topic at hand...
#6 - Lacey - i liked her singing Kiss Me. Kara was right, that was the perfect song for her voice & style. I fear Lacey may go home, i fear she is hanging by a thread in the competition, but i root for her because i think she is SOO sweet. I like her as a person, so i pray she does better as a singer!! I think she did a fabulous job. I really do. TYPICALLY, i'd say that Paige sings better than her - but tonight i liked Lacey better.
Next... 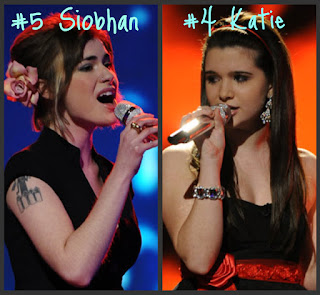 #5 - Siobhan (pronounced "shavon" or something). I actually really like her. I like her as a person. She is wacky & goofy & doesn't care what people think & i love that in people. I also love her voice. BUT i liked her better last week. Something about the tone of her voice is different, i don't at all picture her singing soulful things like Aretha Franklin!!? Okay, maybe soulful is good, but i don't know. I actually kept remembering when Dianna DeGarmo sang that song "THINK" ages ago & she NAILED it. The judges LOVED Siobhan tonight, i thought it was not good at all. I didn't like that kind of song with her voice. The last note was not even that spectacular to me. BUT she still has a beautiful voice.
#4 - Katie was great. I think she's cute & can sing & she has a fantastic attitude. She is kind of like Todrick in that she keeps doing EXACTLY what the judges say & then they don't like it. It's confusing. It's annoying. And if one more judge tonight said one more time that THEY were the ones frustrated?!?!?! Please. ANYWAY. Off my soapbox again!
And my Top Three!! 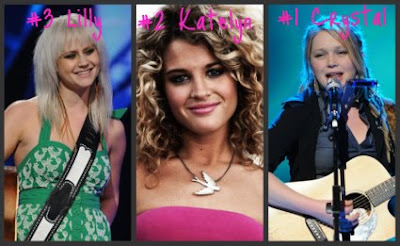 oh wow. i did really terrible on this collage. you can't even read it. so sorry. too tired to do it again.
Also, sorry Katelyn is so in-your-face. But the pics up of them singing were from last week & i could not subject you to that AWFUL makeover. HORRIBLE. Red lipstick does not look so good on you, Katelyn.
#3 - Lilly. I freaking LOVE HER. Inside & out, everything about her. She is cool, amazing, completely herself, & talented. Tonight was not my FAVORITE of all of her songs & that is why she is 3rd. But i do love her & i think she will get VERY far!
#2 - KATELYN, woah!!!! Now, if you disagree with me putting her in 2nd place, you have to understand something. I am kind of a sucker for a female solo artist singing at the piano. I love it. Ginny Owens, Nichole Nordeman, soooo many others... I loved her tonight. Now, i have no idea what she's sounded like before, because last week i got an important phone call when she was singing & i totally missed it. I heard it was great. I didn't remember her from before that. But i LOVED her today. I didn't think it was too slow. But then, i don't mind slow. I thought it was BEAUTIFUL. Riveting. Flawless. My eyes were glued to the TV.
#1 - CRYSTAL. What can i say? SHE ROCKS! She may actually WIN this competition. I would not be surprised. i just LOVE her voice AND her personality.
And that's it. Night, y'all!
Posted by Melissa at 9:50 PM
Email ThisBlogThis!Share to TwitterShare to FacebookShare to Pinterest
Labels: BlogBook, TV