My favorite part of being married...

Recently, i put a question box in my sidebar! Anytime, if you have a question to ask me, go ahead & ask! Leave your name or link or something so i'll know who it was & i will link back to your blog when i answer the question. Or if you'd rather it be anonymous, that's totally fine, too. :)

My very first question was this one (and i'm so sorry i'm just now answering it!). I found out it was asked by Krystal at Krystal's Kitsch.


What is your favorite part about being married?!
The short answer to this question? EVERYTHING.
But i'll try to do better than that. :)
I told someone when we first got married that i feel like i'm on a constant never-ending slumber party with my best friend. And that is still quite true.
Not that we have makeup parties & watch chic flicks & eat pizza all the time! But we are best friends. The best of friends. There is no one i'd rather be with.
One of my least favorite things about being single - as i got into the older single years - was that i felt alone. Yes, i had plenty of years filled with girlfriends in my early-mid twenties, but as i got older than that, i really felt a hole there & i was longing for my husband. I felt like i didn't have that #1 person. SURE, i had my BFF, but she had her own husband & family. Sure, i had my parents, but they had each other. Sure, i had TONS of friends & acquaintances, but they had their boyfriend, their fiance, their husband, their kids, their parents, their sisters. But where was MY number 1 person? Where was the one who would call ME first when they needed someone? Where was the person that would help ME through a hard time?! Who would drop everything for me?! I was longing for him. Yes, i have God, i don't mean to downplay THAT. But you know what i'm saying. I was ready for the one i was going to build a life with. And God is the one who put that desire in me.
As it turns out, i wasn't longing for something that wasn't real. A lot of people will tell you that marriage isn't all it's cracked up to be, but i beg to differ. Marriage is ALL that i thought it would be AND MORE. WAYYY more. Sure there are disagreements. Sure, i would prefer it if he did this that way & he'd rather i did this the other way. But there is a lot more laughter than crying, a lot more kind words than harsh ones. A whole lot more.

It sounds so cliche to say "my soulmate", but i really can't think of a better word. He is my soulmate. He is my best friend, but he's more than that! What better word fits us than soulmates? Because that is what we are.
Wikipedia's definition of soulmate: Somebody with whom one has a feeling of deep and natural affinity, love, intimacy, sexuality, spirituality, and/or compatibility. A related concept is that of the twin flame or twin soul – which is thought to be the ultimate soulmate, the one and only other half of one's soul, for which all souls are driven to find and join.
Yep - that about sums it up. I love the "twin" part. :)
I was telling him about this blog post & reading him the beginning of it. And i said, "it's so hard to answer this question. I mean, my favorite part about being married was last night! But if i just say, we talked for hours, that doesn't really get the point across!" HAHA. But it's so true. Last night, when we went to bed, we got to talking. This doesn't happen often, because although i get super hyper & chatty at bedtime, he goes right to sleep! But last night, we just got to talking. And talking & talking! I knew i would hate myself in the morning (must have all 8 hours, but i was quickly losing those hours - by the time i went to sleep, i was gonna get 5 hours of sleep! & i'm sure that's plenty to some of you, but it is not nearly enough for me!! HAHA!). But it was WORTH IT. I went to sleep with a huge grin on my face & my heart so full of love & joy, i thought it would burst. Last night our conversation was about his music (he composes & orchestrates) & he is SOOO good at it & i am SOO proud of him, my heart just swells. I want the whole world to hear his music - & they should - i'm not being partial - it's extreme talent!! :) Anyway, he was telling me all about a future in that, as a career & what it would take & how certain things work & i was listening to every word. And then we got to talking about our kids & our ideas & our future & our love for each other - lots of laughing & teasing throughout (as we got more delirious!). It was GREAT! Fantastic! & totally worth waking up feeling hungover! ;)
What we felt last night was total love, joy, admiration for each other, intimacy (even through just talking - though we were snuggling during the conversation!), & an excitement & anticipation for our future. The huge grin on my face when i finally drifted off to sleep was due to all of those things! So, yeah, i say that my favorite part about marriage is that whole "i feel like i'm at a lifelong slumber party with my best friend" thing - except this time, it's with my soulmate, the man of my dreams. 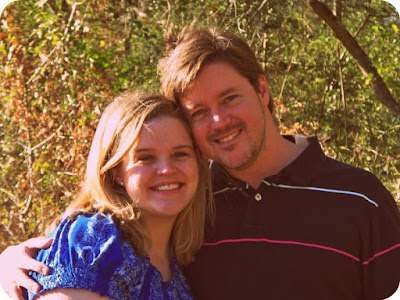 me & my #1
Don't forget to ask me a question - the box is in my sidebar! :) Great question, Krystal!
Posted by Melissa at 8:16 PM
Email ThisBlogThis!Share to TwitterShare to FacebookShare to Pinterest
Labels: BlogBook, Brad, love, Marriage