So, as mentioned in my last blog post, i had two more questions waiting for me at formspring. Both theatre-related questions! I love it! I love theatre, acting, & anything even semi-related! (Pretty much anything in the arts category!) Answering questions about my PASSION sounds wonderful! I was planning on answering both in the same post, but the first question got pretty long...so i'll answer the other one in another post! That alright?

And i'm sorry - i seem to have answered more than you actually ASKED! I got a little bit carried away, going down memory lane!

1 - I know you love acting, what made you have such a passion for it? How old were you when you started acting?
OLD. HAHA just kidding. But i didn't get involved in the community theatres until i was 26.

I've always loved acting, as in - i would perform, direct & choreograph in front of the mirror to my Psalty tapes when i was a kid (What? You don't know who Psalty is? HELLO! Psalty the Singing Songbook!!!!) HAHA. I did some acting in little plays & skits at church growing up, but that's about it. Until high school. There was an audition only class called Musical Theatre. I was in that class in 10th, 11th & 12th grades. I had really small roles in the musicals because i was too chicken to try out for the lead roles! But at least i had the guts to audition for the class! HA!

For about 10 years, i didn't do anything with acting. I was REALLY missing it. I wanted to be an actress. It had been a passion throughout my life but i'd never really pursued it. To be honest with you, I'd always thought that christians had no part in that kind of career. But later i began to believe that was a lie! Of course Christians could be involved in theatre! :) In late 2005 I began reading books on how to make it as an actor. I would sit for hours in Barnes & Noble reading. And every book advised you to get started in your local theatre - to (a) see if it's REALLY what you wanted to do & (b) get some training. It was right after this that i realized that the drive-thru guy at starbucks (my boss was sending me on almost daily runs to starbucks at that time, so i was getting chatty with the starbucks people) was performing in Annie Get Your Gun at the local theatre. I got all excited & told him i'd go see it. I got my mom & sister to come with me. In the very opening number of that show, i had tears in my eyes. Not because it was a sad moment. But because i wanted to be up there. I was MEANT to be up there. I walked out of that theatre, into the lobby, & saw a huge sign for auditions for their summer musical, Beauty & the Beast. I said, "i'm going to be in that show."

Now, i wasn't someone who was FULL of confidence & i'm not even one of those fully motivated, go-out-and-get-'em kinda people! I'm usually shy & have a hard time pursuing things like this. But i wanted it SO BAD. I auditioned - & i was cast as a villager & placemat in Beauty & the Beast. I was SO excited!!! I cannot even tell you - you would have thought i'd won the lottery! I was amazed because over 200 people had auditioned & only 40 would be cast, including the lead roles. I remember running thru the halls of my workplace when the cast list was posted on their website. I was laughing & saying, "I MADE IT! I MADE IT!" My boss hugged me & sent me home saying, "There's no way you'll get any work done this excited!"

I had no clue then that BRLT would become one of my FAVORITE places in the years to come. So i was in B&B that summer. i made LIFELONG friends. I don't know when i decided that i didn't want to do film after all - theatre was where i wanted to be! 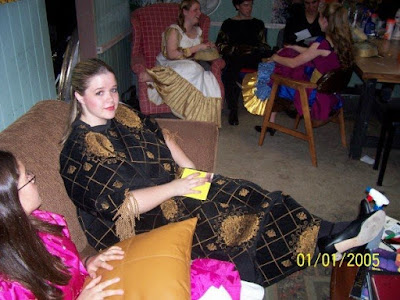 This is me in my placemat costume! Looking worn out! Sorry it's the only pic i have!! Didn't take enough pics back then! & the date is wrong!
After that i auditioned for My Fair Lady. I was not cast, but i didn't want to leave that place! So i worked backstage, which is something i never thought i'd do!! The next show, Mousetrap, they asked me if i would Asst Stage Manage. I had NO CLUE what i was doing, but i said yes. That is when i fell in love with the backstage aspect of theatre as well.
Decemer of 2006 i was in my second show, A Christmas Carol. I had some lines in this one! ;) It was a WONDERFUL TIME. (Although i do remember me & 2 others missing an entrance & skipping our ENTIRE SCENE. Worst theatre moment EVER.) 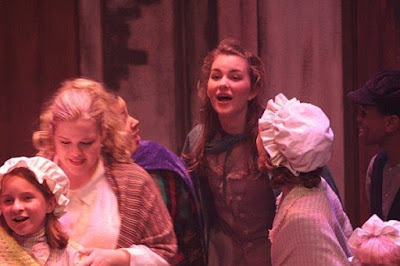 That's me, the blonde. I couldn't get any other pics to post!
Then i did a lot more stage managing... & then i got a PAID job as an actor with Playmaker's touring company. It was really awesome because (1) it was with three others who i had the majority of scenes with in A Christmas Carol - so we'd already become great friends & (2) it was PAID!!! During the day, we traveled to elementary schools in our state & put on a show! Great fun! Best job ever! Sadly, it was only a temporary job! But i have sooo many great memories from this show! 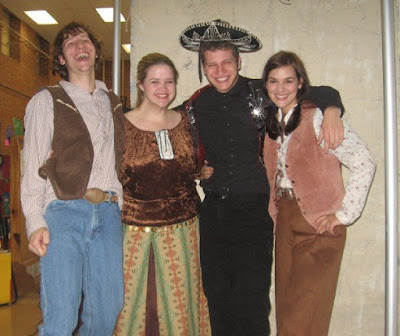 The cast of Sheriff Riley's Spankin New Duds (in costume):
David, Me, Christian & Molly - i miss these guys!!!!
After that was more non-stop stage managing. Which i LOVE. :) The next show i was in was Urinetown, the musical. This was my favorite role ever! And yes, you read that right: URINETOWN. It is a HILARIOUS show about a town that has to PAY to PEE. It is very well written & hilarious. I got cast as supporting role, Little Becky Two Shoes. This role stretched me as an actor, i learned SO much & improved a lot, i think. I loved it! 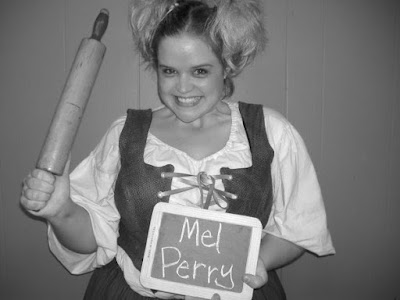 Michael Ruffin (who was also in this show & who was the Starbucks guy i mentioned in the beginning!) took this photo! These were our headshots - us in character with our real names - & they were posted along the wall in the lobby. I had mine matted & framed. But yeah, that would be Little Becky Two Shoes! 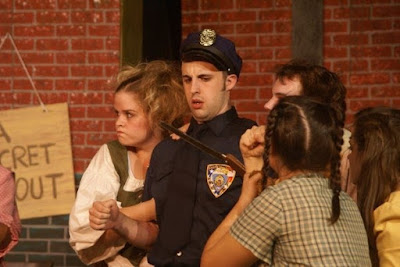 This shot & the next one were taking during production. This is right before i kill the police officer next to me (good friend Tim Callais - who you WILL see on Broadway one day!) 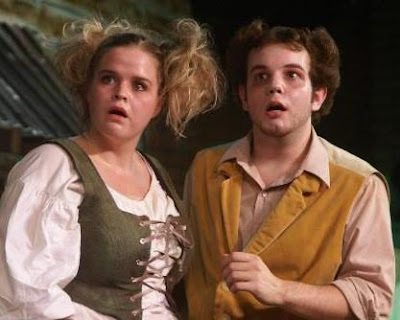 Little Becky Two Shoes & Hot Blades Harry (our characters were bf/gf). We had a song together & were plotting to kill the lead character! HAHA. & yes, i'm sweating!
Then i was in one more show. i can't even believe i did this one!! It also stretched me as an actress! HA! I played Ruby Rae in Best Little Whorehouse in Texas...YES, i was one of the whores! This show was great fun, too, but VERY difficult! I had to learn some choreography & that is not easy for someone as out of shape as i was(am)! I did manage to get my steps down pat & thankfully didn't get booted from the dance routines! I had a couple lines & i had a solo. It was a fun time! Try not to hate on these photos - they are not as naughty as they may seem! HA! 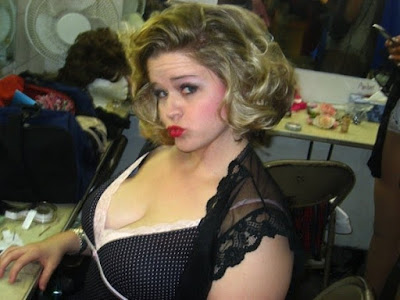 Me as Ruby Rae 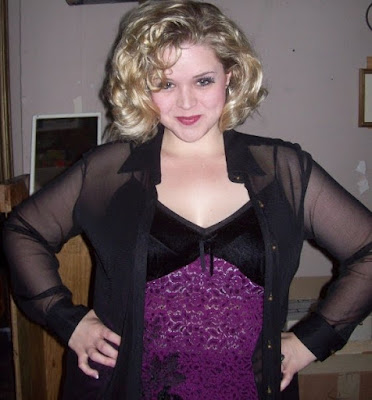 Another of me as Ruby Rae! 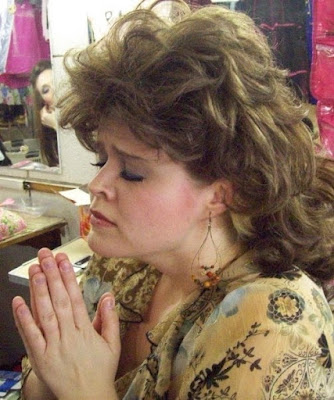 HAHAHA - i could not resist - i also had a short scene where i played one of the townspeople. Like my big Texas hair - it has a mullet too! This is me fervently praying for them to shut down the whorehouse! (Reinacting - this is actually in the dressing room.)
So that was the last show i was IN! After that i co- stage managed The Producers & then i went on a long break to finish planning my wedding & to enjoy married life! When i came back i missed Stage Managing... i love it just as much as performing, just in different ways. They are both very enjoyable & fulfilling to me! So i have done a good bit of SMing since i've been back. I do want to act again - not sure when that will be, but i can't wait!
I am sorry i MORE than answered your question! If you skimmed a lot, that's fine, but hopefully you at least enjoyed looking at the pictures!! ;)
My next question has to do with my dream role...& I have another one too! So i will answer soon! If you have a question for me, type it in that box in my sidebar! & be sure to leave your name/link if you want me to put your link in my post!
Posted by Melissa at 2:51 PM
Email ThisBlogThis!Share to TwitterShare to FacebookShare to Pinterest
Labels: Auditions, BlogBook, BRLT, Stage Managing, Theatre