Idol was really good for the guy's tonight, i thought. Here are my thoughts. I am so glad that next week it'll be just one night a week (not counting results night) & that also means 1 blog about this a week! I know you are thrilled. (Though i'm pretty sure most people skip my Idol updates. And that's okay.) ;)

Anyway. Here are my thoughts from tonight. And once again, i'm doing my least favorites first. 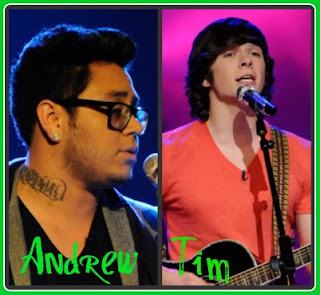 Andrew & Tim are my least favorites. I cannot even pick which one i like the least. I think i like Tim more as a person, but think Andrew is the better vocalist. I don't know. Both of them have pitch problems. Andrew was a one hit wonder. He did that "Straight Up" by Paula Abdul, it was fantastic, but he never did it again. Nothing has come even close to that. It kind of annoys me. And it kind of sucks for him - to be so awesome & get worse & worse...
Tim - UGH. Ok, he's not the worst singer i've ever heard or anything, but i just don't like him. He looks goofy. His singing is wierd. I mean, i just think he will be better in a couple years if he gets some training. Not a favorite. Ready for him to go. 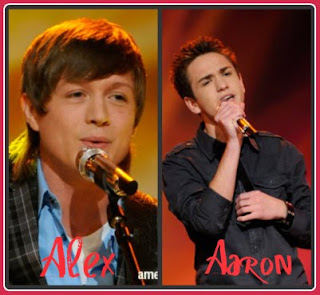 My next two would be Alex & Aaron. I do not really dislike either one of these guys. They're just not the best. The great thing about these two is that they get better & better each week. They are both the youngest & least experienced. I mean, i think neither of them had performed live before Idol! That's crazy! Considering all of that - they are amazing! I wanted Alex to go home on Day 1. But he's consistently gotten better each week. I personally like Aaron's voice better than Alex's. The only bad thing about his voice tonight was that he was sooo nervous you could hear his voice shaking. I get that, though- mine always shakes when i'm that nervous - i hate it & there is absolutely nothing you can do to stop it - except sing more & get more experience & more confident! 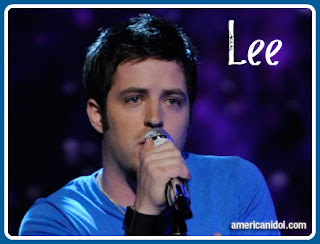 I like Lee. I love his voice. He has a beautiful tone to his voice. My only complaint with Lee is that he is still having pitch problems, which i really don't get - unless he is having trouble hearing himself. And i don't get that either - shouldn't a show like this one make sure the singers can hear themselves?? (I guess that would sound wierd to people who don't sing live - but if you can't hear yourself singing in the monitor & can hear the band too loud or whatever - it throws your singing off). I always get annoyed with pitch problems on this show because at this stage of the game, you shouldn't have people on there who go off key or who are not on pitch! I mean - i could tell you 20 friends right now from church or theatre who i have heard sing live a zillion times that NEVER go off like that. So how come these people are beating out millions on American Idol & yet they can't stay on pitch?! That's just wierd & something i don't get every season. But anyway, enough of that rant! He's cute & he's sweet & i love that tone to his voice! 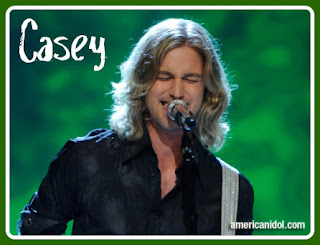 Casey! Woooo. Casey. He was SO hot tonight! And i am not typically one who says that, even though i do think he's cute! His eyes are GORGEOUS. Hair too. Tonight he sat & sang with his guitar & i thought it was great. I like him a lot! 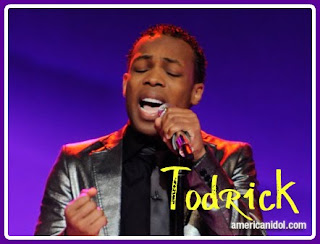 Okay, i am a HUGE Todrick fan, so i am so glad he finally did something the judges liked! I don't know why everyone hates on Todrick, i think he is an amazing SINGER (not just dancer). I love love love him. My husband (the musician) really likes him too. But so many I've heard say they don't like him (friends of mine - not just the judges). And he is the one on the guy's side (Katie on the girl's side) who always did exactly what the judges said & it never was good enough. So i am glad his hard work paid off this week - with the judges saying it was good! Hopefully he keeps doing that style of music so he will stick around for awhile! YAY, Todrick, i heart you! 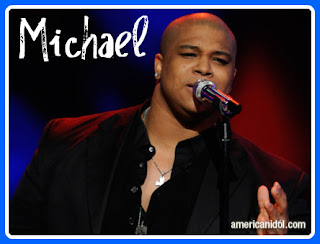 Well, if you watched tonight you know why i put Michael here! He did AMAZING! His voice was awesome. PERFECT. He will go far. VERY far. Right now i'm picturing him & Crystal as the last 2 standing. But really, it's way too early to tell for sure. ;)
And that's it!!! Til next time!
Posted by Melissa at 9:45 PM
Email ThisBlogThis!Share to TwitterShare to FacebookShare to Pinterest
Labels: BlogBook, TV