Finally getting to the last of my questions in my formspring box! Yes, this is my last one, so if you have a question for me, please ask it over in that box in my sidebar! It gives me something to blog about & i love answering questions! (Be sure to leave your name or blog's name so i can put a link to your blog when i answer your question!)

Shayla at Sunshine & Sprinkles is one of my newest blog buddies. Don't you just love that name - Shayla? I do! It's beautiful & so is she! Seriously... she is gorgeous! Shayla is a sweetheart, too. She is engaged to be married in just 4 months! I am so happy for her as i tend to be for all engaged friends - especially when i know they are following God's will! Ya know? You should really check out her page... to see the pics of the adorable couple if nothing else! ;)

Shayla's was a 2-part question:
My questions for you are -
1. What was the best marriage advice you received before getting married?
2. Now that you are married what advice would you give to couples getting married? 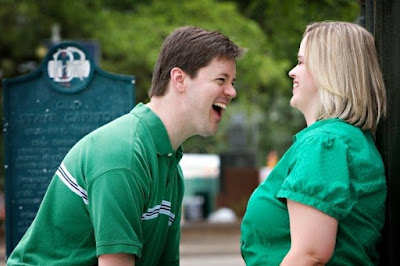 I couldn't decide which advice I should tell you for the first question, so i asked my husband. His response? When a good friend of mine's dad met Brad, he said, JOKINGLY, "Just remember: You can either be RIGHT, or you can be HAPPY."

Now, of course he said it in jest, kind of meaning - 'If mama ain't happy, ain't nobody happy'! This is from a man i truly love & respect & his advice - though meant as a joke - actually had a lot of truth to it! And I'm sure he knew that! And since he told it as a joke, it stuck with us!

It's about compromise. That word is one that i always automatically thought was a BAD thing because i heard it in the context of church & a relationship with Christ. You should never compromise! But in a relationship with your spouse, compromise is important! There will be times you disagree - even if you don't think you do now - & you will just need to come to some sort of agreement. Even if it is to agree to disagree! And that is kind of what i mean by "you can be RIGHT or you can be HAPPY".

I guess you would think that if you are RIGHT then you ARE happy, but not really. It kind of takes the joy & fun away when you are right but you made someone else feel *this big* in the process . You may remember a time when you were younger...you had a disagreement w/ a friend about something & you KNEW you were right. You had NO DOUBT. So, after the argument you looked it up & found the proof that you were RIGHT! YAY, I'm right, Victory!! So you showed that friend your proof & then you just felt sort of... CRUMMY? You probably never did it again, even in arguments where you were 100% right! That's because just because you are RIGHT, it doesn't mean you are happy!

- i thought some of his rules for the dog were silly & unnecessary. I felt he was being too strict. But some things really got on Brad's nerves & i ended up letting go & letting him train the dog how he wanted. I'm much happier now that i let my husband train the dog in certain ways that he felt were necessary. These things bothered me at first but they proved to be very good ideas! And even now, just this week, i thought he was being too harsh w/ the dog - but we talked about it again & now i understand. He's right. We're both happy. =)

- Brad didn't see a need for a dishwasher at all & he also liked leaving dishes around the sink but not IN the sink. I, however, cannot STAND seeing dishes on the counter, i want them washed & put away (or a few IN the sink is okay)! Because of the time it takes to hand wash dishes, they would sit there & pile up & it would just make me SICK. I don't even mean for a long time, but just after dinner one night we'd have a lot of dishes in that sink! I tried to suck it up, but it bothered me so much... Brad ended up agreeing to getting a dishwasher, which wasn't a big deal to him before. In turn, i agree to let him leave one glass that he may use later on the counter. It is much better this way, the kitchen is clean, so i am happy & brad can leave his glass out & he is happy! :) 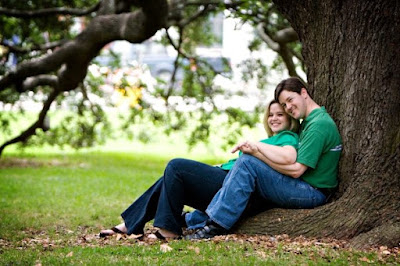 Now as for your other question, "Now that you are married, what advice would you give to engaged couples?"

The other question we kind of learned during marriage, but this one we figured out BEFORE. If you read my love story, you know that we dated back 11 years ago. And back then we did not talk. I mean, we talked, don't get me wrong, but we didn't talk about what bothered us. I think we were immature or afraid to lose each other, so we would just suppress & bury the things that bothered us & that turned out to be lethal to our relationship - for another 11 years! Thankfully (SOOO thankful!) we are together again. But when we began talking again, we began emailing each other & talking about so many things that went on 11 years ago. And we realized how many things that were miscommunicated. It was really crazy. I would read an email from him & just think "i cannot believe he thought that! I cannot believe he thought that!" Things that eventually damaged our relationship enough to where we ended it. If only we had talked about it!

When we realized this, it was before we became an official couple again. But we had realized it through emails SO STRONGLY that it has not been a problem  since. We talk about everything.

There were things that came up that were HARD to talk about. I didn't want to. I didn't want to bring it up. I was scared. But i did it anyway. There were times he was mad at me. He didn't want to say anything. He'd rather bury it. But he did it anyway. Why? Because it's important. Back then, he would get mad at me & then he'd just blow up. And i didn't understand WHAT I DID WRONG to cause such an explosion! But that's because he never came to me the first time i offended him. So i kept doing it & it turned into this big thing! There were also times i would be mad at him & wouldn't talk about it! 9 times out of 10 these things were actually JUST MISUNDERSTANDINGS!!! It was crazy! & so we were letting anger & bitterness build when if we had just TALKED ABOUT IT, we would have discovered the misunderstandings & not been angry at all.

Brad & i are A LOT alike. It's kind of wierd, though, because as alike as we are in so many ways, we EXPRESS a lot of things differently. So sometimes misunderstandings come in & we have no clue that we are really actually on the same page & don't even know it! So yeah - talking is extremely necessary! 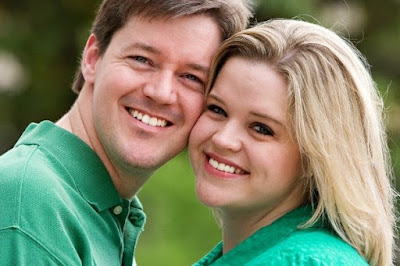 I hope this helped!!

Ask me a question! The box is in my sidebar.
Posted by Melissa at 9:29 PM
Email ThisBlogThis!Share to TwitterShare to FacebookShare to Pinterest
Labels: BlogBook, Brad, love, Marriage