Some of you have read about our love story. It's a wonderful story - i love it! In fact, i remember when it was happening, thinking "I should be writing all this down - it could definitely be a screenplay for a romantic comedy!"  HAHA - i know that is silly, but it's true. It felt like the perfect love story. It was a whirlwind - yet not, because we have known each other our whole lives.

You may remember from reading our story that we also dated ages ago - when i was 18 & he was 21. We were together for a little over a year - & then we broke up. More specifically, he broke up with me. But i remember at the time feeling like the relationship was going to end. I felt like God was telling me to end it. But i wouldn't - i liked having a boyfriend. Soon enough, Brad did it for me. It was over. 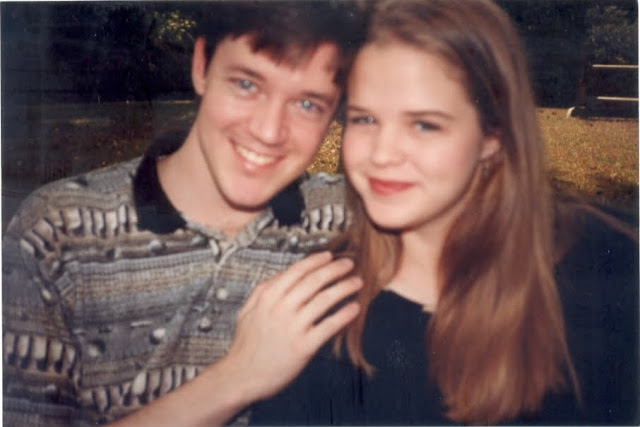 I remember in the years that followed after our breakup, i did not lose faith that he was the one for me. I just was 100% certain that God was the one who put us together. I believed without a doubt that we were meant to be - i just figured that the timing was off & that when it was HIS timing, then God would bring us back together.

But after a few years, i moved on. He wasn't the one. What was i thinking? I hated when married couples would say "you just know" when you meet "the one" - because i felt like i HAD KNOWN but was WRONG! I mean, i DID "just know" - but then it was over. You know what i mean? Yeah... it was rough. I finally moved on though - completely.

Until 11 years later, when he walked back into my life. And it became very obvious that he really was the one for me after all. I kept saying "some things are just meant to be" (which is why it always says that somewhere in my header!).

So anyway - getting to the point! The other night, Brad & i were working on a song he's writing & I remembered that i used to write songs a lot in my teens. I didn't remember what they were - if they were really corny or really good... but i wanted to find them - now that i have a husband who might could put them to music! ;) I found them - but i also found a poem i wrote - after our break up. It was written 11-3-97. And  I just wanted to share it.

I've never heard so bad
My heart aches for you
But all the wishes in this world
can't make me come back
into your arms
your warm embrace
where i long to be
This time away is killing me
My heart's so full of pain
and even though you will return
I long
to see you now
Your handsome face
to touch your cheek
I want to hold your hand
But all this sorrow has some joy
waiting at the end
one day
one day i know we'll be together
i'm letting go now but you'll be back
For God has promised us
A life together
As husband and wife
And even though this time away
seems really long right now
it can't compare to the rest of our lives
Together.
I love you.

I let Brad read it last night & he was amazed as well. How thankful we are that God brought us back together! It is truly unreal. There are days when i'm looking at him or laughing with him & i am struck by the reminder that we were APART for 11 years. It amazes me that during those 11 years, we remained pure & continued to seek God's will when it comes to relationships. It amazes me also that when we were back in each other's lives, he was EVERYTHING i wanted in a husband - none of the qualities i despised before were there any longer, all of the things i had once wished he could be, he now IS. God used those 11 years to grow him up into the man He wanted him to be & Brad says i am changed too - that i've also grown up & that we are now better suited for each other than we ever were then! Honestly, it's kind of like that WAS a different relationship - because we were so different then (than we are now). 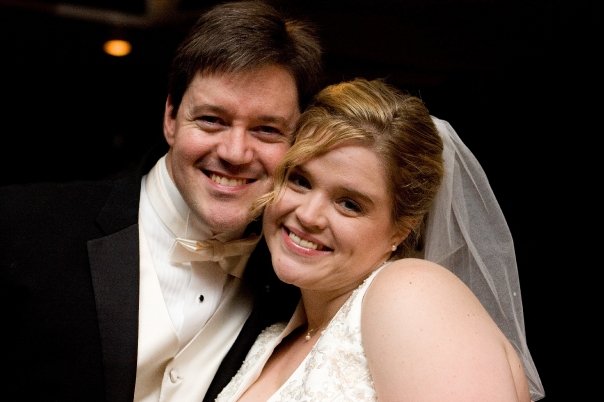 Brad read the part about "for God has promised us a life together as husband & wife"... & he was like "woah, you're a prophetess!" HAHA. But i wasn't - it' s just that i KNEW back then - was certain he was the one, but that the timing was off. I KNEW THAT I KNEW. There was no doubt. And then - as the years passed, the doubts did come in. It was heart breaking, but i moved on... i just kept on with my walk with God, hoping that one day i would meet someone. And i did, eventually.

And it was him.

It's just amazing to me how God has it all planned out. When i was freaking out & worrying that i would die an old maid - i had no idea that Brad was about to come back into my life... & that he would be all i ever dreamed of...
Posted by Melissa at 10:33 PM
Email ThisBlogThis!Share to TwitterShare to FacebookShare to Pinterest
Labels: BlogBook, Brad, love, Marriage