I have never made omelettes before. Ever. Until today!

I have been following Gina's Weight Watcher Recipes for awhile now & today i finally got a chance to try one of her ideas! I made a few variations of my own & it was quite delish!! You should definitely check out her site & try out some of her stuff! By the way, i am not on Weight Watchers, but i know that if her goal is to make dishes low in points, then they will naturally also be lower in calories. Her pictures always look AMAZING & i am going to continue to use her recipes! You should, too!

This recipe called for 1 egg & 2 egg whites to keep the points down. This was my first time cooking with egg whites like this & i have to say, it was not too bad!!! I made Brad one too but he was a little scared of the egg whites, so i just used 3 eggs for his. He said he thinks that is the best omelet he's ever had. YAY! :)

I also included chopped turkey sausage because we had some that needed to be used before it went bad! 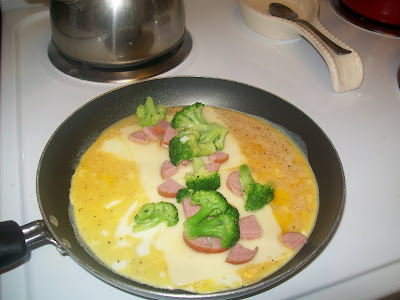 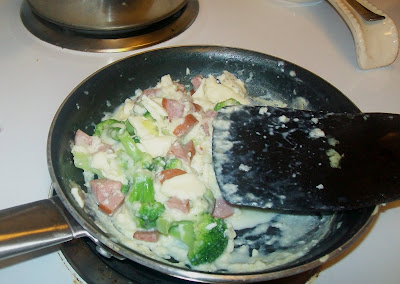 My "omelet" - i used a smaller pan & couldn't flip it right - so it's more of a scramble! Still delish! Same as Brad's except 1 egg/2 eggwhites instead of 3 eggs.
Gina's Broccoli & Cheese Omelet
(with slight variations of my own)
1 serving/takes no time at all to make. 5 minutes each, i'd guess.

Lay the cheese down int he center of the eggs & top with broccoli & chopped turkey sausage. When the eggs are set, flip the sides over to the center to create your omelet.

And that's it! Delish!! Thank you, Gina, for your fantastic recipe!You can look at hers here. & check out her pics, her omelet looks SO much better than mine!
Posted by Melissa at 12:43 PM
Email ThisBlogThis!Share to TwitterShare to FacebookShare to Pinterest
Labels: breakfast, Recipes, Skinny