The Last Flapper & other weekend happenings

So it was a great weekend!! Went by too quick, though! Ah, well. Next weekend I'm going to a women's conference & i'm really excited about it! Plus, the faster my weekends (& weeks) go by, the closer it will be to our VACATION!!! Ahhhh! (Cannot WAIT!)

So Friday, I met with Brad after work for our mini-date. I call it a mini-date when we meet for a quick dinner between work & theatre. :) We met at La Madeleine's. It's been awhile since we've gone to eat together, & i enjoyed it! Then i went to the theatre to work the 2nd night of The Last Flapper.

The Last Flapper is what i did most of the weekend. It's a one-woman play about the life of Zelda Fitzgerald, wife of Francis Scott Fitzgerald. A lady i know named Nancy played Zelda & had a TON of lines to learn (2 hours worth!). I stage managed, & on second stage (& sometimes on the main stage) that includes running lights & sound. So that is what i did. Lights are easy - i had 39 light cues & it was fine. Sound on the other hand, was quite a bit more than i'm used to. I think i've maybe had 15 sound cues in a show before, at most (that i myself had to run). But this time i had 52 sound cues. And some were one right after the other. It was challenging! Especially when Nancy skipped three pages of dialogue & i had to [frantically] find where she was & skip to the right light/sound cue & get us back on track! HA! (She did go back & cover what she'd missed so that was good. The audience never knew, but whew!! The joys of live theatre!) 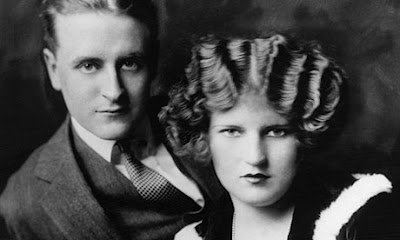 Scott & Zelda Fitzgerald (Google images)
Mainly, this show got me really interested in reading more about Zelda Fitzgerald. I mean, WOW. What a woman of passion, of joy, a woman who really didn't care what others thought. She was bold. The play comes from her very own quotes from her diaries & letters. It takes place in a mental hospital, where she stayed at the end of her life, battling Schizophrenia. And this is all told on the last day of her life, as she died in a fire that evening. After the last show, i met Brad at Barnes & Noble & looked for her biography. That's how much this play intrigued me. They didn't have one but i will be ordering one!!

Saturday, i woke up & went to the gym! So proud of me! :) I did my FULL workout - not just the usual cardio, but my first strength-training session (after being trained on Tuesday but not being able to start until the weekend, due to The Last Flapper). Anyway, after the gym, i went home & cooked that delicious Romano Ranch Chicken Skillet dinner (but for lunch) & then rested for awhile before i had to be at the theatre for another performance. That was the best performance by far!

Sunday was kind of a yucky day. I weighed, only to discover that i still had not lost any weight, despite spending 4 days a week doing cardio for at least 30 minutes a day for the past month. Despite quitting fast food altogether, drinking 60-90 ounces of water per day, & eating healthy clean foods. In a month, i've lost 1 pound. Oh, and i lost 0 pounds the 2 months before that. i can honestly say that i have given this MY ALL for 14 months now (well, i started out slowly but gradually have done more & more)!! I was really upset & frustrated at first on Sunday. Then i got myself together & decided... I am going to give this strength training a couple more weeks to do it's job, weigh again in 2 weeks (September 1st) & then if i have lost nothing, i will see a doctor. For today, i have my gym bag packed & ready to begin a week of cardio & strength training!! :) And i'm excited. Because even if i do have to see a doctor - SOMETHING is going to work out & i WILL lose the weight. Because man... i am working hard & despite the lack of weightloss, i'm losing inches, my clothes feel great, & I feel fantastic! :) So i ain't quitting & eventually something's got to give!!!

Sorry, that maybe should have gone on my weightloss blog, but every once in awhile i like to post updates here. :)

Anyway, so Sunday i had a matinee show at the theatre, the last performance. When i first got there, i had to make copies of the program because we didn't have enough. It went well, despite some major aggrivation with a copy machine trying to make programs before the show!!

Afterwards, i met Brad at Barnes & Noble. I got two novels - "Best Friends Forever" by Jennifer Weisner (she wrote In Her Shoes, which was also made into one of my favorite movies) & a book called...i forgot...something about grace... LOL. Mind went blank!!Oh, & a huge highlight!! I was looking around B&N & saw two very dear friends who i haven't seen in too long as they've been away at college... Tim & Marion! Met them both when we did Beauty & the Beast in 2006 & they began dating when we were all in Urinetown, the Musical in 2007! Tim was one of my ushers in my wedding! Anyway, that was a surprise! 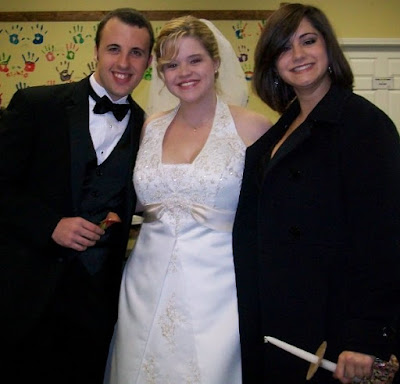 me, tim & marion on my wedding day!
Then Brad & I went to eat at Jason's Deli. Guess we made up for not eating out for awhile!! Twice in one weekend, sheesh!! But we had a good time, i miss him too much when i do theatre! & with him working on this music project i have missed him even more! But he's doing so well & is almost done!

So there ya have it, my weekend in a nutshell! Ok, not really. That was a bit lengthy!

Have a great week!
Posted by Melissa at 10:01 AM
Email ThisBlogThis!Share to TwitterShare to FacebookShare to Pinterest
Labels: BlogBook, Books, BRLT, Health, Theatre, weekends