SO in case you didn't know, there is this really awesome blog out there called "GIRL TALK". It's kind of like a community. My friends Laura & Linds write there, and they have others guest post too. We talk about girl stuff. I really love it & think you should hop on over & join. :)

GIRL TALK has also recently started having Blog Hops! Last topic was shoes.
This week?
HOBBIES.
So... i have lots of little hobbies...
Cooking
Reading
Blogging
Taking Pictures
However, my MAIN hobby is THEATRE. I love to be a part of a show!
It's so much fun!
Growing up, i was always on the "drama team" at church. Then, in middle school & high school, i chose "drama" for my electives. Also in high school i was in Musical Theatre class. It was an audition-only class for Sophomores, Juniors & Seniors. I was in it all three of those years & i loved it. I always had a smaller role, but it was so much fun it didn't matter. It is true that "there are no small parts, only small actors." :) Even the smallest role is important!
I graduated high school in 1996 & i began getting involved in community theatre in 2006. That's 10 years without theatre in my life. Tragic! In 2004 or 2005, i decided i wanted to get back into acting. I thought i was going to head to L.A. & try to become a big movie star. :) I started going to Barnes & Noble everyday & reading about how to get started in the acting business. You know what all those books said? To get involved in your local theatre. Audition for some shows, learn about character building, etc & then if you still want to do it...go for it. Theatre is very different from film, but still. All the books suggested starting with theatre. My boss at the time sent me on Starbucks runs all the time & i got to know the Starbucks guy. One day i discovered he was in a show at Baton Rouge Little Theatre! I decided i'd go see it. I got my mom & sister to come with me. It was "Annie Get Your Gun". In the opening scene, my eyes filled with tears. It wasn't a sad scene!! I was just emotional & overwhelmed & this was my one thought, "You should be up there with them! Not sitting here!" We left after the show & they had the huge poster in the lobby announcing Beauty & the Beast, the summer musical. I said, "I'm going to be in that one."
I'm kind of shy (yes, i know. i can perform in front of hundreds but i get nervous in front of 2.) but i managed to sign up for auditions & show up & get cast. I'll never forget it!! I got cast in Beauty & the Beast (as a villager & placemat) & the rest is history! The Beauty & the Beast cast had lots of newbies to BRLT & we all became great friends. Most of my closest friends from BRLT were in that show with me & it was also their community theatre debut. 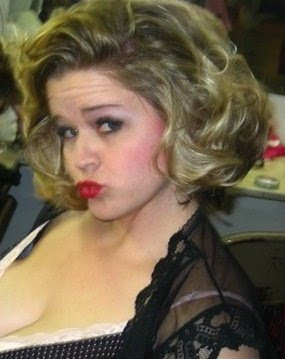 Me as Ruby Rae, in Best Little Whorehouse in Texas. 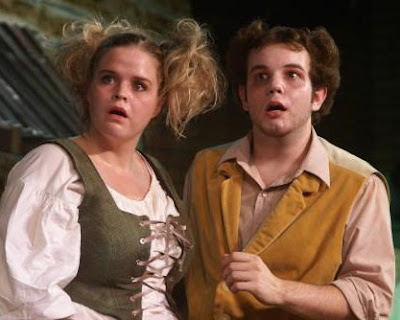 My favorite role as Little Becky Two Shoes in Urinetown, the Musical.
The guy is my friend Bryan, who played Hot Blades Harry.
We were partners in crime. :) 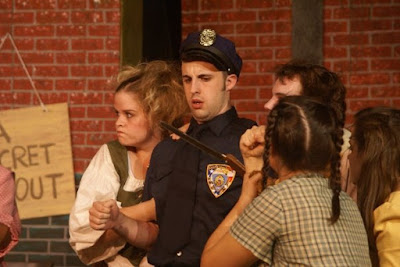 Us again. Both of these pictures were taken during the peformance.
Since Beauty & the Beast, i've been in A Christmas Carol, Urinetown, the musical, & Best Little Whorehouse in Texas (yes, i played a whore. yikes!). I also got a paid acting job with a different theatre company. We traveled to elementary schools across Louisiana performing a show for students. THAT was a blast & definitely the most fun i've ever had WORKING! Later, i got into stage managing & found that i love it JUST AS MUCH as performing. I ended up SMing far more than i've performed. There is something about being on the other side of auditions, watching it all come together, & taking care of the cast. I love it.
My favorite experiences were performing as Little Becky Two Shoes in Urinetown, the musical
and Stage Managing Steel Magnolias & The Elephant Man. Of course, i've had LOTS of wonderful experiences but if i had to pick three...
Before i was married, i did every show back-to-back. It was my LIFE. And i loved it. After getting engaged, i took a year off - to plan the wedding, & to enjoy the being a newlywed. Then i got back to it. But after my first show back (The King & I) i realized how much i MISS MY HUSBAND when i do theatre. SO much! You basically work an 8 hour day & then go straight to rehearsal till 10 pm. And you only have Friday night & Saturday off (especially when you Stage Manage. When you perform, you will get nights off where the directors are blocking scenes you are not in or choreographing dances you are not in. But stage managers show up EVERY time. They are the first to arrive & the last to leave.) So these days, i just look at the season, the shows they will have & pick based on that which ones i want to work most. I really love being a part of that place. Awesome people are involved in theatre, i am telling you! Crazy people! But a good crazy.:) At this past year's Beaux Arts Ball (our annual ball where we dinner, dancing & an awards ceremony), i was shocked & surprised to receive the "best backstage volunteer award"! I couldn't believe it! 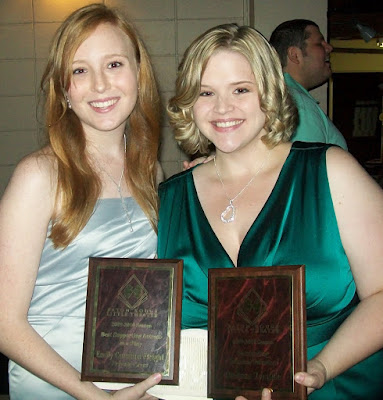 me & emily with our awards! i was so proud of her. she got "best actress in a comedy".
People are always asking me what is next. Well, right now, i am taking a break! I'm truly enjoying it too! :) But next, i will actually be auditioning. Crimes of the Heart is playing in January & i am going to audition for that. If i don't get in, i'll audition for Guys & Dolls. We'll see!
You should blog about your hobbies too & link up at Girl Talk!
Posted by Melissa at 9:48 PM
Email ThisBlogThis!Share to TwitterShare to FacebookShare to Pinterest
Labels: acting, BlogBook, BRLT, hobbies, Stage Managing, Theatre