How many Louisianians does it take to find a restaurant?!

Ohmygosh. Last night was just SUCH a crazy night! All we wanted to do was go get some dinner as a family in a restaurant. I mean, really - is that too much to ask? Apparently, it is.

Usually on vacations we eat one meal out together & the rest we eat at the condo. My sister & her fiance have to go back home today so we decided to make our night out last night, since it was their last night with us. We ate lunch kind of late, so we didn't leave the condo in search of a restaurant until 7pm. 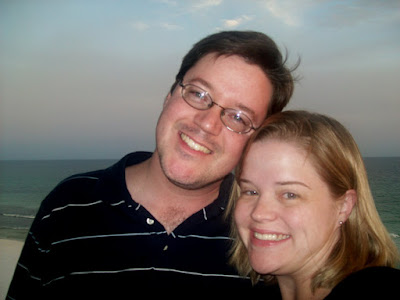 Ready to Go Eat
First of all, Destin is PACKED. EVERYONE is here for Labor Day weekend. Which is fine. It's not that bad on the beach, but we noticed just how crowded it was last night when we were trying to get some food. I know that it will become a lot less crowded on Tuesday, since so many people have to go back to school & work.

Anyway. We left the condo at 7. We didn't really know exactly where we were going to eat, which i guess was our first mistake. We only knew that we (mainly me & my sister) didn't want to eat at a chain - or at least a chain that is in Baton Rouge. I mean, we're on vacation, we wanted to eat at a new place (new to us).

So we drove. Michelle & Mike were in Mike's car & the rest of us were in my parent's car. Dad kept suggesting places that we have in BR. Place #1 - We turned into "harbor"-something (i forgot the name of it) but it's a place where they have lots of little shops & restaurants. We turned in there only for 2 parking attendant people to tell us that it is full & there is no parking available. So we left. On to Place #2.

We continued down the highway where there are literally tons of restaurants. We decided to go on to SanDestin, another place full of shops & restaurants. I've been there before & it's fun! So we turn in that one. The first parkinglot was FULL! The guy told us that there was another parkinglot two streets over. We went to that one - & IT was full. Well, crap! We left.

On to Place #3. Michelle called mom's cell & said that they saw a fun place back in Destin called Cooper's Grill. We all agreed and went back. Cooper's...just, wow. From the outside, it looks to be an Applebees/Chilis/TGIFriday's type place. We go in & realize it's a bit more fancy than that - perhaps more like Mike Anderson's or The Melting Pot or something. We go in & sit down. The hostess comes to fill our drinks & tells us she will have our menu's in a bit. We finally get menu's & oh.my.gosh. The prices were OUTRAGEOUS! I mean, we could have gone to Ruth Chris for that! I couldn't believe it! Now we knew why this was the only restaurant in town that wasn't packed! No wait or anything.

The entree's were between 35 & 55 dollars. A 6 ounce filet was $36. 6 ounces!! The entrees did NOT include a side item. OUTRAGEOUS! The side items were 10-20 dollars each!!! Are you kidding me?! They had what they called "small plates" & those were around $10. Brad & I were figuring out what to get to SHARE - we were going to get a small plate & a side item to share. & water.  Before we got our menus mom asked for a coke & the waitress said, "is pepsi alright?". Dad said later he thought 'you're charging 40 bucks for a steak & you are offering Pepsi?! What is this, Taco Bell!?" HA. I didn't even think about that until he told me, but he made a good point!

Now, my dad is super easygoing & really is not one to leave a restaurant. & normally if he would suggest leaving a restaurant, we would all be like "aw, dad, come on!" (not that he's ever suggested leaving a restaurant...), but when he shut his menu & said, "Well, i'm ready to leave this place." we all kind of froze & got quiet. LOL. I know we were all very thankful! He was ticked. So when the waitress came to tell us that they were out of french fries, we told her we were leaving & got up & left! She apologized & was really sweet. I hope she knows we were leaving because of the prices, not because they were out of fries! HA! I told mom & dad that & they said, "oh no...she got the picture!"

So in the parkinglot, Michelle & Mike suggested (Place #4) Shakes. A drive-in type place featuring hamburgers, hotdogs & milkshakes. I wasn't thrilled. I really was hoping for a sit down restaurant. Oh-well. Beggars can't be choosers at this point, right?! So i didn't say anything. Even though i really wanted Twisted Palm's Grill (a restaurant i had seen) or TGIFridays (which Michelle didn't want b/c it's a chain but we don't have them in BR & i think they are delicious!). But whatever - we headed to Shakes. Took forever to get there it felt like. Finally got there & it is PACKED. A couple of long lines of people & a long drive-thru line. We were following Michelle & Mike so they pulled back onto the highway & we assumed they were going somewhere else. At this point, i did NOT want to go to Shakes. We'd be standing in line forever! Called Michelle & she said they were going to park next door. I sighed & said, "I really want to go to The Twisted Palm or TGIFridays." She said "ok. let's go to the twisted palm. we'll meet you there!" I told her we had to stop & get gas & then would meet her there. So we go to get some gas.

While getting gas, three guys walked by with their pants down to their knees. One of them had a fast food bag. We were just sitting there & my dad says all straight-faced, "That guy is awfully brave to be walking around with that fast food bag." We all died laughing. Brad said, "four white people about to rob him for his fast food!" & i'm like, "Hand me the bag & nobody gets hurt!" We were all starving at that point. HILARIOUS. 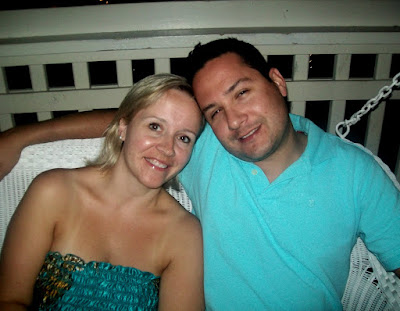 Waiting to eat at The Twisted Palm.
So we go to The Twisted Palm. YAY. I'm thinking - this is it. After this, we'll eat & it'll be wonderful. We climb the steps & see Michelle & Mike sitting in a swing. They said, "45 minute to an hour wait." We debated staying or going back to the condo. At this point, i would be ticked if we had to go back to the condo! Then the last two hours were nothing but a waste! Dad & Mike felt the same way. Nobody else cared. We decided to stay. We doubted it would be that long of a wait. After 15 minutes of waiting, a family of four came out the restaurant &, as they were leaving, they told us the food was not good. So we're all looking at each other like "you wanna stay?" We would just rather stay. I mean, that might be one table having a bad experience, when everyone else likes it. So we decided to stay. But then mom ended up asking families "how was it?" as they left. And EVERY ONE of them said either "it was okay" or "ehhh..." & then 3 groups said "terrible service. really bad!" SO we got up & left. I mean, seriously?!!

I was so mad! At this point, Michelle is so hungry she is shaking & we all were ready to call it a night. We had left the condo at 7!! It was now 10:30, if i remember right! CRAZY!

We ended up with WHATABURGER. Nice. 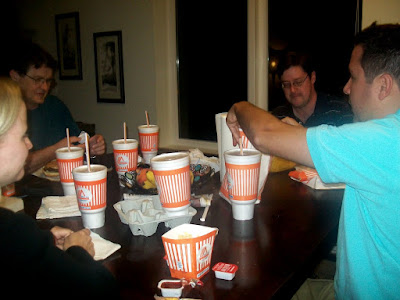 Honestly - that was the best hamburger i've ever had. :) 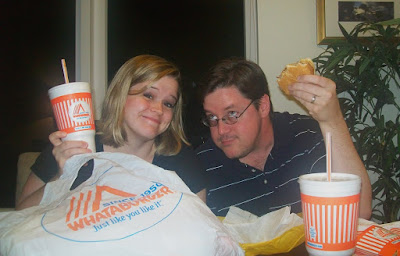 It was actually funny. I think we all went through many different emotions: happy, mad, angry, ticked, irritated, frustrated & laughing hysterically! It was funny. & of course it gave me a good something to write about! :)
Posted by Melissa at 9:44 AM
Email ThisBlogThis!Share to TwitterShare to FacebookShare to Pinterest
Labels: BlogBook, dinner, Family, vacations