Last night was crazy! I worked backstage for the B-52's. Ohmygosh. Haha. The minute i walked in the door, i realized i should have brought my camera. I don't usually, it's work, but I've been wanting to bring it at some point to get pics with coworkers & such. Anyway, tonight was the night i needed my camera. The entire lobby was all decorated in cool 70's decor. They had round tables everywhere with cute tablecloths & little spinning disco balls. Upstairs they had a reception with DELICIOUS food. And furniture that was donated from Goodwill. I was clear furniture... chairs & tables... in a retro style & they had little gerber daisies in a vase on the tables. They had a cute 70's-ish couch with a pillow that said "love shack" on it. And EVERYONE dressed up. Not everyone, but most people wore all that 70's garb with their hair done in beehives & such! Man, i wish i'd had my camera! Some of the head staff at the Manship had their hair done by Rigsby Frederick Hair Salon. It was just...awesome. I said at least 10 times last night, "i'm so mad i didn't bring my camera!!" 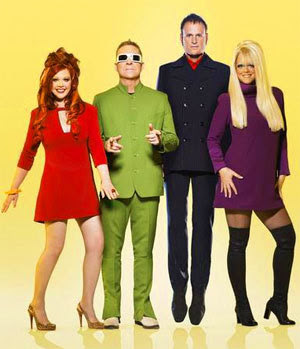 I was rep'ing, meaning i'm basically there to do whatever the artists need. It can be kind of boring, because most of the time they don't need anything. The only request i had last night was for some CHOCOLATE (& it was not a female!). So i solved that by grabbing him some Famous Amos chocolate chip cookies from the bar. It did the trick. :) And then you're also there to keep audience members from coming backstage. We only had one issue - a slightly drunk guy just came on backstage. There were two of us, but Sam got to him first & she's like "you have to go back in the lobby. You can't be back here." & he kept saying, "come on... i wanna talk to the b-52's...." Um, yeah. That's not how this works. LOL. So anyawy he went back with no problems. Thank goodness!

I spent a lot of time sitting with one of their crew members & one of their truck drivers. They were very nice. The truck driver was telling stories about driving for Lady Gaga & Rascal Flatts. (Apparently the guys in Rascal Flatts are super nice & Lady Gaga is super weird...surprised? I didn't think so!) But it was fun hearing all his stories.

Anyway, it was a good night & it definitely went by quickly - i was hoping it would!

I missed Fill in the Blanks Friday & I always like doing those... so here we go... a little late. ;) 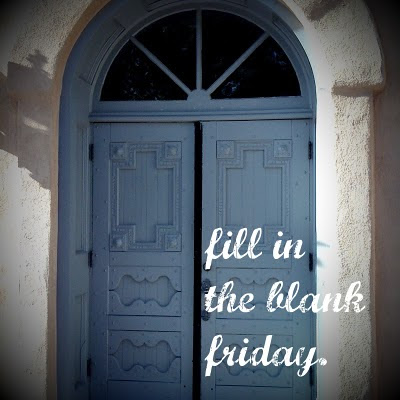 2. High School was okay. It was a hard time, but i had tons of sweet friends that made it worthwhile. And i was in musical theatre class which made it worthwhile! But yeah...P.E. class was no fun (i was picked on) & things at home were kind of crazy too.

3. A little dream i have is to have my bloggie friend, Laura, come visit me!! We would have so much fun! I'd also love to go visit her...see Pennsylvania, meet her hubby & cute kids, spend lots of time at Panera, & meet her friends Rainey & Kim (who have also become my bloggie friends)! :)

4. A big dream i have is to start a family & be able to quit my job & be a stay-at-home mom. & also to afford a house. I know people do this all the time, but it seems so impossible right now. It's not, though. It'll happen one of these days!

5. If i could drive any car, my pick would be a mini cooper. Except not. I mean, the time to get a mini cooper was in my twenties, before my husband was in sight! And now, by the time i get a mini cooper, i'd have to turn around & sell it because i'd get prego & need room for car seats. And actually they do fit car seats but i don't want to have to break my neck trying to get my kids out of the car. But yeah. I adore mini coopers. I told brad that maybe it can be my "mid-life crisis" car when the kids are grown & gone. (Really, though, i want a newer SUV. I love SUV's...& I don't care what kind...just a good kind that is a bit newer than mine!)

6. A time that i felt really & truly beautiful was on my wedding day.

7. Tomorrow I will be going to church, then coming home & hanging out. Likely cooking dinner & having the in-laws over to watch The Book of Eli (our latest in on Netflix).

Have a great weekend!
Posted by Melissa at 7:58 AM
Email ThisBlogThis!Share to TwitterShare to FacebookShare to Pinterest
Labels: BlogBook, fill in the blank, Theatre, work