I left work at 2:15 today. I went in knowing i would leave early. Yesterday, i felt bad, but i stayed the whole day. Why? Well, it's a long story but i am completely overloaded at work & it's kind of an urgent situation where i have to do paperwork for a WHOLE lotta clients ASAP. Today i went back to work but i felt AWFUL this morning. At least 10 times worse than yesterday. But i went anyway because this paperwork HAS GOT to be done! I worked my booty off getting it all done & did not finish until 2:00! That is without taking a lunch! That is without getting on facebook OR blogger! I mean, i meant serious business. :) I finished at 2 (& i'm not REALLY finished...but what is left to do is stuff where i'm waiting on someone else...), tied up some loose ends of other work stuff & then i was outta there! Came home & had pizza for lunch.

I have decided pizza might be my favorite food. Strange, because as a kid & teen, i liked pizza but it wasn't my MOST FAVORITE food or anything. But NOW... wow. I could eat it daily. I WON'T! But i could! We get digornio frozen pizza at Walmart & it is DIVINE!

Anyway. After this i suppose i'll go take a nap. I am feeling pretty YUCK & am yawning a lot too! 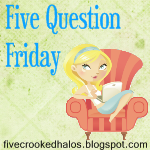 Haha... seriously, me. He doesn't cook that much. He cooks eggs & does a great job! And i often get him to season stuff after i've cooked it, because he seems to know how to season it jusssst right.


2. How often do you talk to your mom?
Not often enough! Probably about every other day, but that is including through facebook or email. I haven't talked to her in person since Sunday.


3. Are you adventurous in the kitchen or stick to the recipe?
I am getting more & more adventurous! When i first started cooking (while i was engaged), i had to stick to the recipe EXACTLY. I would freak out if i was slightly off in any way. But now i have learned how to substitute things or put more of something in than the recipe says or do without an ingredient, etc. It's more fun that way, too! :)


4. Is your second toe longer than your first toe?
Actually, yes. Very much so. So much so that we sometimes say that i am flipping people off with my toes... Ha! I used to hate it but now i don't really care. :) It's Me! HA! (Besides, isn't that a sign of intelligence? I thought so.)

5. Do you dress up for Halloween? (If so, what will you dress up as this year?)
Nope. I never have. My family never celebrated Halloween. However, even if we had, i probably still wouldn't. I'm terribly boring about that kind of stuff. I don't want to think of a costume! HA! The only time i ever dressed up was for a costume party in 10th or 11th grade. I went as a clown. And in 4th grade, i had a costume party for my birthday party. I was a bunny. :) 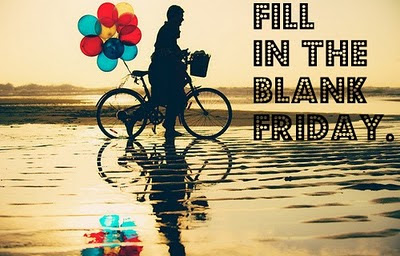 2. I wish I could quit my job & not have to find another one.

3. I like pizza, theatre, the lsu lakes, dogs of all kinds, pajamas, white water rafting, hanging with the fam, chic lit, waking up on my own (aka no alarm), romance, cinnamon in my coffee & soup weather.

4. I can do all things through Christ who strengthens me. Philippians 4:13!

5. I hope that hubby & i are feeling much better tomorrow!

6. I think you've just got to have some good girlfriends!

7. I was thankful my boss let me leave work early today!

So what are your plans for the weekend? Ours are to REST & GET BETTER. However, I do have a haircut appointment tomorrow at 1, and we also have a photo session (for Christmas Card pictures) on Sunday at 4! Hopefully we will be much better by then! Don't really wanna reschedule because i think they are pretty much booked till the holidays!

Have a great weekend!
Posted by Melissa at 3:57 PM
Email ThisBlogThis!Share to TwitterShare to FacebookShare to Pinterest
Labels: 5QF, fill in the blank, memes