back to the lakes!

We FINALLY hit the lakes again. YAY!! :) I love love love the LSU lakes. It is so much better than walking a treadmill...& it takes longer too. My legs, thighs & butt were screaming at me... i definitely got a good workout. Why am i talking about all this? Shouldn't this be on my other blog? Oh-well. :) 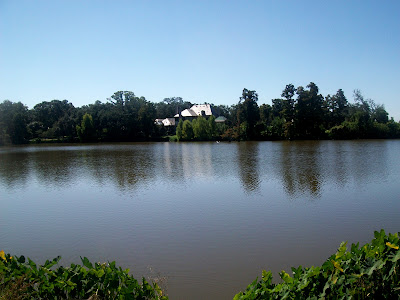 Today is an LSU game day also. Who knew? Actually pretty much everyone knew...except us. Because we're cool like that (or not). We got to the lakes & couldn't get over the traffic. I'm like, "Hm, there must be a game today!" Didn't take me long to figure out who we were playing either, as anyone not in purple & gold was in orange & white. :) I'm sure they were wondering why we were walking & not heading towards the stadium? Ok, there were a few other walker & bikers too. :) But my purple shirt was just coincidence! Don't laugh...we are just not into sports at ALL...my husband likes sports even less than i do! HA! I hope we win the game today... but Brad could care less hahaha. And "hoping we win" is about as far as it goes for me too. Pitiful. Oh-well! That's just how we is, haha... :) 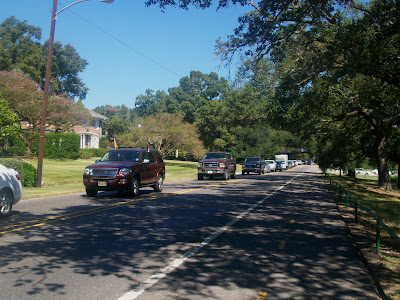 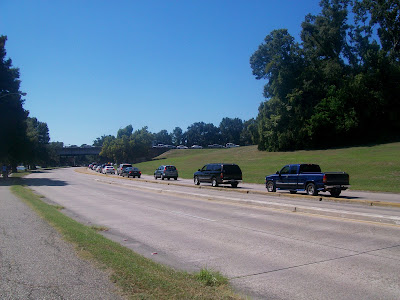 Game Day Traffic! Yikes! All those cars on the interstate above are turning right to loop around & be in this line below...heading towards the stadium. :)
As we were walking, one car in all that traffic had a guy in the backseat with his door open puking. I know, that's disgusting! The other three guys in the car were laughing HYSTERICALLY. I actually laugh everytime i think of it, because the driver guy was laughing so hard that his laugh had gone falsetto. He was crying he was laughing so hard! I assumed he was puking b/c he was drunk & i was like, 'how pitiful! he's drunk enough to be sick to his stomach & they aren't even tailgating yet?!" I mean, it was 11 am on the dot at this point. Too early to be THAT drunk already...doesn't the drinking normally start once they are tailgating?! Then as we were talking about it on the way home, i realized he may have been car sick. I mean, they'd probably been sitting in stop&go traffic for an hour or so. And that would be another reason his buddies could be making fun of him like that. It was good-natured making fun. But that falsetto laughing had me tickled!


I am so glad the weather is beautiful again!! YAY! First week with weather like this. LOVE IT! 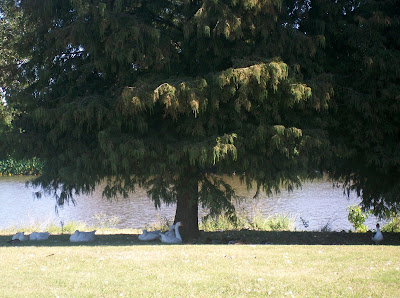 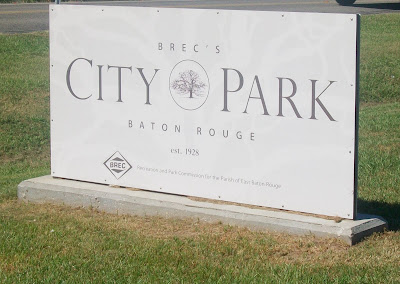 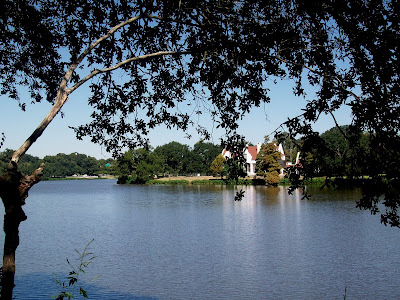 I love that house back here, i'll have to get a closeup next time. 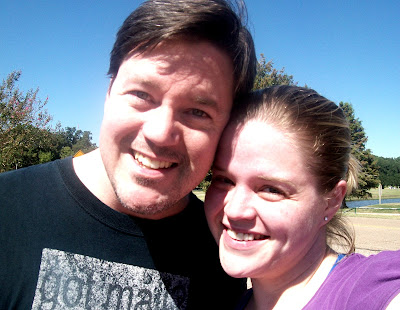 We had a great walk & it was beautiful out! :)
When we got home, Brad's mom was leaving us a message on the answering machine, saying that she had cooked some chicken & shrimp stew if we wanted to come over for lunch. It was perfect timing because we had just gotten in & i was taking out the stuff to make some jambalaya. But i do not ever turn down a chance for my mother-in-law's cooking!!! I took a shower & then we headed on over there. YUM! SOOO GOOD! It was kinda like gumbo... & i've been wanting food like that for awhile, but it's too hot for that in the summer. Hooray for fall recipes! :)
Posted by Melissa at 2:54 PM
Email ThisBlogThis!Share to TwitterShare to FacebookShare to Pinterest
Labels: BlogBook, exercise, LSU, the lakes