So, we went to Natchitoches to see our friends in Chicago, the musical. Tim & Marion (who i met in my first show Beauty & the Beast at BRLT) are dating & going to NSULA. They both got lead roles in Chicago. Tim played Billy Flynn & Marion was Mama Morton. I kid you not. They were fantastic! I was so excited that some of Tim's family was there...family that's never seen him perform! I am sure their jaws hit the floor. Tim is incredibly talented. As my husband said, there is only one Tim Callais! I promise you will see his name hit Broadway one day! Marion is amazing, too. She has a fantastic voice & is a great character actress. She is hilarious, too. Love her! 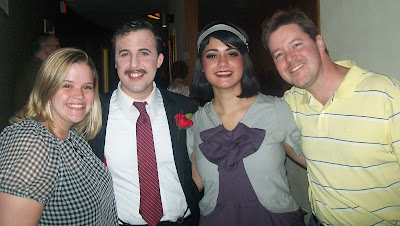 Brad & I with our friends Tim & Marion after the show!
Bill & his wife Margaret also drove out to see Tim & Marion's performance.  We got seats right by them. We enjoyed their company! Bill always cracks me up. He is hilarious & a very talented actor as well. 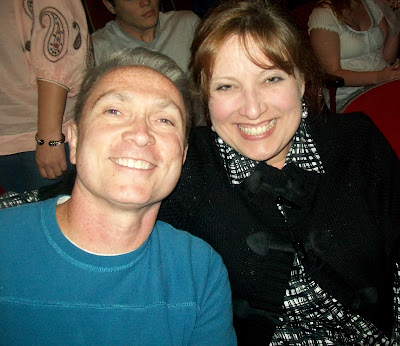 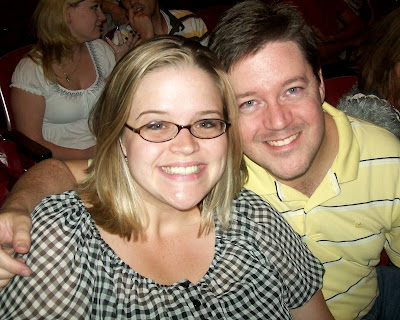 Me & my man.
I also met my friends Tim & Amber (often called "Timber") in the cast of Beauty & the Beast. This Tim played Lafou, Gaston's sidekick (the other Tim was Lumiere)! He & Amber were dating back then & are still dating today! He also goes to NSULA & played the Sargeant in Chicago. Well, guess what? After the show, he proposed to Amber on stage!!! It was SO exciting! I knew about it, because Tim emailed me & a few others to let us in on the secret. He didn't want anyone to say "i would have come if i had known!" I was thrilled that we were already planning on being there that night! I watched Tim in the last number & you could tell he was only going through the motions. The dance steps. His mind was a million miles away! After the curtain call, he called Amber up there. Apparently, she thought she was going to be bringing roses up for the two lead actresses' last performance. But that was all a ploy! He told the audience how he met her on a stage 7 years earlier & that their whole relationship has been on stage. He got down on his knee & proposed. I was crying! She was crying! Everyone was applauding! it was GREAT. I was so excited for her!! Tim & Amber make a great couple & have been together a long time now! Now they will be getting married! Amber had no idea & was totally surprised! 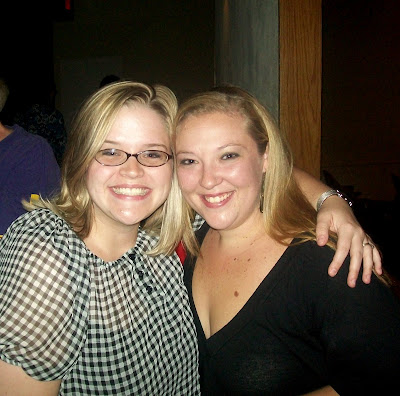 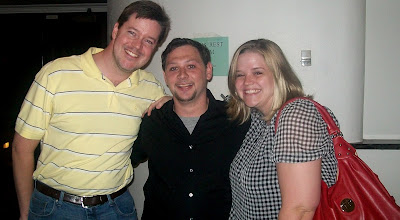 Us with Tim & Amber.
We had a great time & are so glad we got to be there for both the show & their engagement! YAY! :)
Posted by Melissa at 8:09 PM
Email ThisBlogThis!Share to TwitterShare to FacebookShare to Pinterest
Labels: BlogBook, Engaged, Friends, ROADTRIP, Theatre