Yay for new recipes! I haven't stopped cooking by any means, but it seems I've only been cooking all those things that i already know how to cook...things that I've already posted! Finally got some stuff to try two new recipes... next grocery trip i'm getting the stuff for some soup recipes! Mmmm, I heart soup season. :)

Last night I tried Creamy Chicken Enchiladas from my Taste of Home 2009 Annual Recipes Cookbook. Mine is slightly different from their recipe, but you can check out the original recipe here.They were super easy to make & delish! The bad news is this is not a healthy recipe. The good news is both of us could only eat one. And for Brad not to get seconds...well, let's just say that never happens. ;) 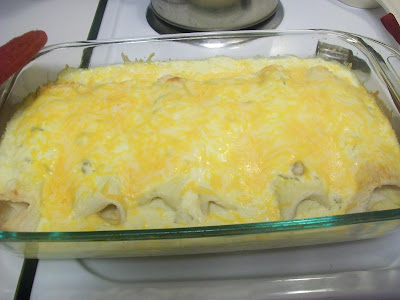 Prep time: 15 minutes
Baking time: 35 minutes
Makes 6 enchiladas
1 package (8 ounces) cream cheese, softened
2 tablespoons water
2 teaspoons onion powder
2 teaspoons ground cumin*
1/2 teaspoon salt
1/4 teaspoon pepper
approx 3 cups cooked chicken*
6 10-inch flour tortillas*
1 can (10.75 ounces) cream of chicken soup*
2 cups (16 ounces) sour cream
1 cup milk
2 Tablespoons chopped green chilies*
2 cups (8 ounces) shredded cheese*
*see bottom of recipe for notes on these ingredients.
1. In a large mixing bowl, beat the cream cheese, water, onion powder, cumin, salt & pepper until smooth. Stir in chicken.
2. Place 1/2 cup down the center of each tortilla. Roll up & place seam side down in a greased baking dish.
3. In a bowl, combine the cream of chicken soup, sour cream, milk & green chilies; pour over the enchiladas.
4. Bake, uncovered, at 350 for 30-40 minutes or until heated through. Sprinkle with the cheese & bake 5 minutes longer or until cheese is melted.
My notes/variations/explanations of the original recipe:
*Lee Ann, you can leave the cumin out! Haha! :)
*I bought a rotisserie & just shredded all the white meat chicken off. It was the perfect amount.
*They used 10 6-inch tortillas, but i didn't notice that till i got home with my 10-inch tortillas. :)
*I just noticed while typing this that the original recipe said 2 cans of cream of chicken! Oops! That was actually ok though. Probably should've halved the remaining ingredients since i only had 6 tortillas in 1 pan (instead of 10 in 2 pans like the original recipe had).
*The original recipe said 2 cans! Ack! Kinda scared of chilies over here. 2 Tablespoons was brave. :)
*Recipe says cheddar. I used a mix of monterrey jack & colby, because that is what i had. It was delish!
There ya have it!
Posted by Melissa at 10:17 AM
Email ThisBlogThis!Share to TwitterShare to FacebookShare to Pinterest
Labels: Chicken, dinner, Mexican, Recipes