It is the weekend! So glad. :) And it's a new month. For some reason i always love a new month! But i'm especially excited about October - lots of fun things on the calendar!

Well, here it is...Five Question Friday... link up at My Little Life.

1. Did you have a pen pal when you were little (or now)? Where were (are) they from?
When i was little, i had a subscription to a magazine that i THINK was called Creative Kids...something like that.  On the back cover, there was a list of other kids, their address, date of birth & their hobbies. I remember picking some of them & writing them back & forth for YEARS. Crazy now i do not remember any of their names or where they were from. And now i'm kind of freaking that they put all that info on the back of a published magazine...hello, stalkers? We thought nothing of it back then... weird. Maybe the address wasn't on it & we somehow sent it to the magazine....?

When i went on a missions trip to Panama at age 19, i met a girl named Rebecca. We became instant friends & pen pals & remain pen pals to this day. I have visited her a few times - first in Canada where she is from & where i went to be in her wedding - & later in Tennessee where she lived once she married her husband. She also has visited me here in BR twice, the second time was for my wedding. :) They are now moving to New York & i hope to be able to visit them there! Anyway, we don't do snail mail AS OFTEN as we did from about 1997 - 2008, just because now we have email & facebook...though it did take her FOREVER to get email or facebook...which was good because it kept up the snail mail. :) 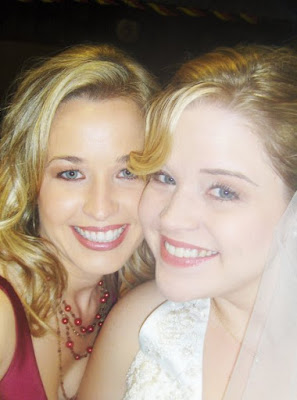 me & rebecca, on my wedding day :)
2. If you could do a different job for one day, what would it be?
I am sure this comes as no surprise... i'd love to spend one day on Broadway - either on stage or as stage manager. I also think it would be fun to be a casting director.
3. Do you remember your biggest fear from when you were little?
Roller Coasters. Which is crazy because i love them now.
4. What do you think is a waste of time? Why?
Watching TV... don't get me wrong, i used to be a TV junkie. I didn't care, either. I like TV! But i was kind of forced out of it because when we got married, Brad didn't have one. I convinced him to let us get a TV with all the Wal-mart giftcards we got for wedding gifts. He agreed, mainy because we wanted a TV to watch movies on. So we got the TV but we didn't get cable because the few channels we have are clear as day & that is all we need. I wouldn't mind getting into one or two shows this season, though. But the days of sitting in front of the TV for hours are long gone.

Your turn! :)
Posted by Melissa at 10:22 AM
Email ThisBlogThis!Share to TwitterShare to FacebookShare to Pinterest
Labels: 5QF, BlogBook, memes, TV