My sister & I have always had a wonderful relationship. This is surprising in some ways, because we couldn't be any more opposite than we are! Looks, personality, likes & dislikes, everything. We are polar opposites. Even so, we have always been very close & i think the older we get, the closer we get. I always say that if i have one daughter, i want two. Why? Because i love the bond sisters share. I don't know what i would have done without my sister through those ugly teenage years! She helped me through a lot. 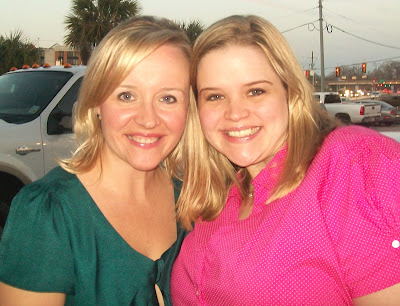 Michelle & Melissa - March 2010
Recently, Michelle had to write an autobiographical narrative for her master's portfolio. She emailed it to me & my parents for us to read. I began to read it & by the end, i wanted to publish it on my blog. I was just sooo proud of her. She has been through a difficulat situation, but she came out on the other side a stronger person. I felt that maybe her story could help others. I wasn't sure if she would agree to publishing this on my blog - but she did.

As you probably know (if you've been reading my blog for any length of time), lately I've had several friends go through divorce. Or "almost" go through divorce. I was heartbroken; I literally grieved as if someone had died. I was sad because i knew they were devastated. I know how much they wanted their marriage to work. And i know how willing they were to make that happen. If you know me at all, you know that i am not in any way advocating divorce. Unfortunately, sometimes keeping your marriage together is beyond your control. I am posting my sister's narrative in hopes that it can encourage you or anyone you know who may have gone through a similar situation. I know it is long (& i'm making it longer with this intro!), but i felt it was worth sharing. Thank you, Michelle, for sharing your story. I love you!