FYI, before i start. Stroube's is pronounced Stroubie's. Not Stroobs. Just wanted you to know, so you are not saying it wrong as you read my post. I mean, it sounds so much better the right way! HA! =) 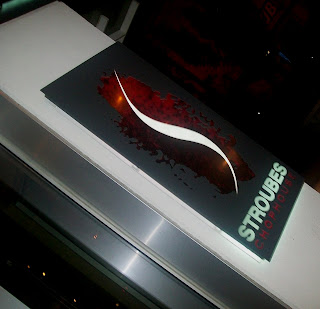 Last night we went out for dinner to Stroube's Chophouse. I'd been wanting to go there ever since they catered an event at the Manship where i work. They had Shrimp&Grits, which were AMAZING. In case you are going "shrimp & GRITS?!" - let me explain. I have never liked grits. I think i never had them right, because i recently had them with breakfast at my mother-in-law's & they were delicious. Anyway, other than that, the only time i have liked them was years ago when i worked at a gift shop. For Christmas, our boss ordered a thing of Shrimp & Grits from the restaurant next door. I thought it was the oddest food combination, and i didn't even LIKE grits, but i tasted them anyway & OHMYGOSH. They were AMAZING!!! I was told back then that it was a classic Louisiana dish. Really?! I was born & raised here & i'd never heard of it, but okay! HAHA.
That was about 5 years ago, and i've heard of them more in the last few years. I never had Shrimp & Grits again until i went to The Grill Room in Perkins Rowe earlier this year. I saw the dish on the menu & got it. They weren't good. WAY too spicy. Didn't like it at all. 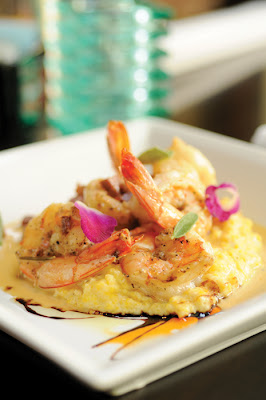 The Shrimp & Grits from Stroube's
*image from 225 magazine


Then i had them from Stroube's a few months ago when they catered an event at the Manship. PERFECT. I'd been wanting to go there for our anniversary. So we went! I had a glass of wine too. It was the recommended wine to go with the shrimp & grits. Oddly, i liked the wine before i got my dinner, but WITH dinner? Not so much. Haha!
They brought out homemade bread with honey butter. Oh, yum. It was DELISH!!
I got a caesar salad....VERY GOOD.
Then came the Shrimp & Grits. The portion size was small - & when i say small, i mean - it filled me up just fine, but for the price, the plate should have had a lot more food on it! Still, it was absolutely delicious! The grits are full of cheese & garlic & corn & wow. Really good. The shrimp was grilled to perfection. I loved it. I didn't put any salt on it. Brad, however, put loads of salt on it. I do not think he was impressed. However, his sinuses were WAYYY out of wack yesterday, he could hardly breathe! So he agrees that his "tasters" were probably messed up!! He got a side of mashed potatoes (yes, with shrimp & grits...ha! so classy!) & he wasn't impressed with those either. He did like the bread & honey butter though!! HA!
Anyway, i'm really glad we got to go. The food & service was perfect. Romantic atmosphere, too. 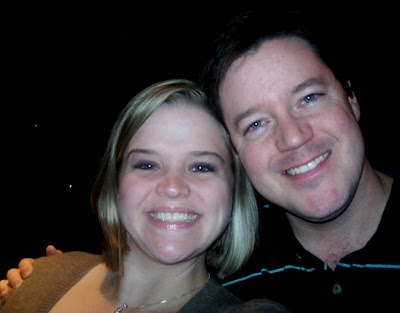 After dinner, we walked to the Manship Theatre, where i work. I wanted to take him up to the 4th floor terrace. It's got such a beautiful view! The terrace is open to the public unless there is a rental there. Well, there was a wedding reception being held there. But my co-house manager amber was there & she got to meet Brad. She let me know we could go to the 6th floor terrace, which i thought was only open to patrons of the restaurant up thre (Tsunami). She told me no, it's open to anyone. So we got to go up on the 6th floor terrace. GORGEOUS! I loved it!! 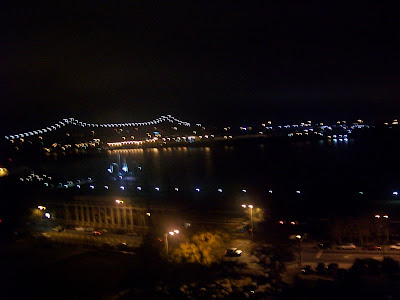 This is the best i could do... this is on auto...I tried the "night landscape" setting - eh, not so much! It looked like i was taking a pic of fireworks! 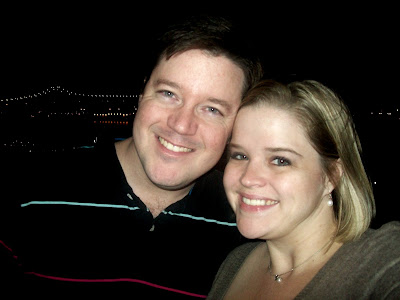 Happy Anniversary to Us!!!
We had a good time. Originally we were going to spend the whole afternoon together, ending with this dinner, but Brad woke up with his allergies all out of whack! He was miserable! He spent the day relaxing, but we still went to dinner. Today he is feeling 100x better it seems, so we are going to have lunch with my parents for their birthdays & then he's taking me on a potterybarn shopping spree!! {squeal!!!} Then we are going to the movies. Great weekend!!!
Posted by Melissa at 9:30 AM
Email ThisBlogThis!Share to TwitterShare to FacebookShare to Pinterest
Labels: anniversary, BlogBook, Date, reviews