I love theatre. You all know this. I got involved at Baton Rouge Little Theatre in 2006. I auditioned for Beauty & the Beast & made it. That cast was made up of about 40 people & i made SO many awesome new friends. What is cool about that cast is we seemed to just BOND, more than other casts do. 2 cast members ended up being ushers in my wedding, 2 1/2 years later. I am still very good friends with several of them. Sure, people move away, & it's easy to lose touch with those who do not stay involved in theatre. But when we see each other it is like time never passed. We are just meant to be friends. Ya know? I love it.


Over the past 4 1/2 years, i have made many friends at BRLT...not just the cast of Beauty & the Beast. I did show after show after show & you just connect with certain people & feel that you could be friends with them forever. Two of my favorites are Danielle & Charlynn.

The first time i saw Danielle was in a play at Baker Little Theatre. She was cute as a button. Later, we both auditioned for Best Little Whorehouse in Texas & we were both cast. I never thought we'd become such good friends as she is 11 years younger than I am! But we did. I just love her to pieces. She is beautiful, inside & out. And a very talented actress. 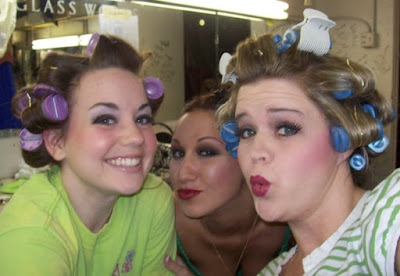 Danielle & I in rollers getting ready for a performance of Whorehouse
(with another whore, haha, Jenna)
I heard about Charlynn long before i met her - she began theatre before i did but wasn't doing any shows when i got started. Then we both auditioned for Urinetown, the musical. I met her in the hall waiting for our turns to audition. I liked her immediately. She is so easy to talk to, friendly, funny, & totally cool. I had heard that we would probably be up for the same roles - we both wanted Pennywise - & that she is an excellent actress. They weren't sure of her singing voice because she usually did plays. So i went in knowing she was my competition. But it didn't matter. Instant friends. We both got cast - but not as Pennywise! I was Little Becky & she was Old Ma Strong. 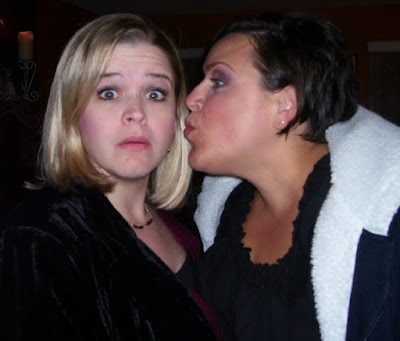 Anyway, just had to share about two good friends i am thankful for! Last night we had so much fun at dinner! We talked & talked & talked for HOURS!! We talked about Danielle's school (she will be student teaching very soon!), Marriage (me & Charlynn), Baby Fever (me haha), & theater - new shows (crimes of the heart - charlynn & i are both auditioning!) & reminiscing about Whorehouse, Urinetown & other fun times. Had a great time & can't wait to get together again! Love these girls! 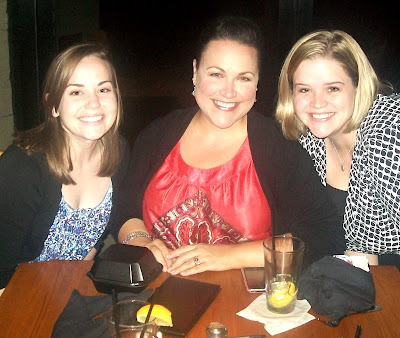