I am so very happy it's Friday. Although this Sunday i am working from 10 am till about 10 pm... i might die. Prayers, please! HA! For those of you who don't know, in addition to my full-time job, i work part-time at the Manship theatre downtown. I work about 5 times a month, and i usually don't work such long hours. I love working there...I just prefer to spend my weekends at HOME! (I know some of you work these kinds of hours all the time - my nursing friends come to mind - it is just not my favorite thing to do!)
I didn't actually mean to sign up to work this event. There are 2 concerts that day - one at 2 & one at 7. I am there the whole time to take care of the performing artists. The good news is that i can go home if they go to their hotel between shows. I can read a book if there is nothing to be done. So i will survive & i will just keep in mind that paycheck - i know i will be happy about this once it's all over!
The group i will be rep'ing for are called 4 Troops. They are all former members of the U.S. Army & they now travel & sing together! How cool & crazy is that?! You can read about them here. I watched part of a video & they do sound really good! So i think it will be cool working with them! 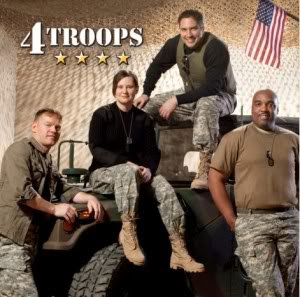 Last night i worked a show called Stefon Harris & Blackout. WOW. They were AMAZING! I was working as house manager & there were two concerts...one at 7 & one at 9. They had merchandise & we were selling, something i haven't had to do there before. It was fun, though. The leader (Stefon Harris) was next to me signing autographs & i really enjoyed watching him interact with the audience members. He was genuinely interested in them. He asked them if they were musicians. A lot of kids came & were just in band for maybe 3 months in the 5th grade - he treated them all with respect & kindness. He encouraged them. He asked their names & made sure to spell them right on the autographs. :) He was just a really great guy. 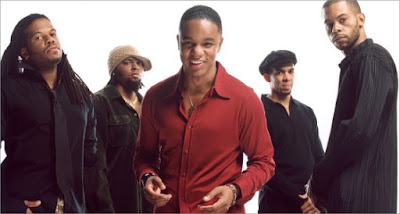 The first concert i didn't get to watch. Other house manager things had to be done! The second concert, however, i did get to watch most of it. It was amazing. The band was FANTASTIC! A lot of what they do, they just do on the spur-of-the-moment. The piano player (far right) was UNBELIEVABLE. I have never seen somebody do what he could do on a piano! I was REALLY wishing Brad was there to see it (Brad can rock it on the piano too!)! The lead guy is a vibaphonist! Does that sound familiar to anyone?! :) You wouldn't believe what this guy could do on that thing!!! CRAZY (in a good way)!

I found out, by the way, that the difference in a vibraphone & a xylophone is that a vibraphone is made with aluminum bars instead of wooden ones. It also has a sustain pedal, like a piano does, so that you can hold the notes out a little longer. There are lots of other differences, but those are the main ones that i have found. :) Learn something new everyday! Ha!

I really can't give an honest opinion on 4 Troops (though i bet they will be fantastic), since i haven't actually seen them perform yet. But Stefon Harris & Blackout...amazing. You should go see them if they come to your area!