I missed yesterday's memes. I was really REALLY busy at work yesterday. (I mean, REALLY. Ha!) I tend to be the MOST busy on Mondays & Fridays at work. Mondays because everybody & their mama decides that is the day to call me to get me to do/fix/help/fax/advise. =) Fridays because i want to tie up all loose ends from Monday - Thursday. So yesterday i did not stop.

We also had our Thanksgiving Fiesta for lunch. They let us vote if we would rather have traditional food or a mexican fiesta & we voted mexican. I'm so glad because it was SUPER fun & i will get all that Thanksgiving deliciousness Thanksgiving week! The fiesta was amazing & no one wanted to go back to work after. We wanted a NAP. Haha. There was tortilla soup, all different rotels & dips, chips, taco shells with all the fixings, an enchilada casserole & the best 7-layer dip i have ever had. Ohmygoodness yum.

After work, i had to run to the grocery store for a couple of things. Brad is playing a song for his sister & her friend to sing at his sister's church later in the month. I was going to cook up some Mozzerella Stuffed Turkey Burger Sliders for them. (They turned out good. This time i got dinner rolls for the buns instead of hamburger buns. DELISH! Will do that from now on!) I got home & Jaimie was already there & her friend Joni was pulling up the same time as i was. Now, i have heard SO much about Joni as she has been a friend of the Venable's for years. I was so excited to finally meet her. Brad & Jaimie told me i would love her & they were correct! She is hilarious & i like her a lot. She brought her younger daughter, Rylee, with her. Rylee is two & a half & was good, especially considering she had nothing to do. She was sooo cute. I also learned that Fievel is very good around kids. I think the only other kid he has been around is Levi, who is 5. And that was a year or so ago. Fievel was great around Rylee. =)

After they practiced their song, Brad started playing other worship songs - oldies but goodies! Ones we sang in church years ago. Joni & Jaimie sang together for many years, years ago. So this was a singing reunion of sorts. HA! We called my in-laws to see if they wanted to come by. They did & we sat & sang worship songs for maybe an hour. It was awesome. We actually want to do it again & have a few more people join us. =)

ANYWAY. On to the memes. I know it's Saturday, and these are Friday's memes. But i want to play anyway! Here is 5QF. I will fill in the blanks in another post, as this one is too long already. 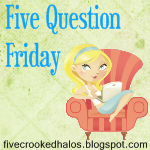 1. What is the most physically painful thing that has ever happened to you?
Fracturing my finger. It's the ring finger on (thankfully) my right hand. I say thankfully because it is still crooked & i am glad it isn't my wedding ring finger. Anyway, it was slammed in the van sliding door when i was a teenager. I believe i was about 15. My sister was driving me & several friends to some concert (probably Carmen - HA!). She was driving mom's van. I was sitting in the front. I reached back to grab my seatbelt, reached a little too far & BLAM! Someone slammed the sliding door & OMG. I gasped & was frozen in shock & then started bawling like a baby. How embarrassing! But yeah - it hurt like you would not believe. Throbbed for hours. It was not straight when it was slammed. It was bent, to grab the seatbelt. And now it is pretty crooked-ish. HA! Yeah...that was no fun. I sprained my ankle years later & it still gives me trouble every now & then. But that didn't hurt near as bad as this finger!! P.S. For all of you that are going to comment that if i can't deal with a fractured finger, just wait until childbirth: Mama M has had 5 kids naturally with no epidural, and her answer to this question was when she broke her toe. Just sayin.)

3. How long did you believe in Santa Clause? How did you find out he does not exist?
I don't remember, honestly. I only remember seeing mom & dad sneaking to the Christmas tree with gifts, and feeling not surprised. I think i had suspected as much at that point. It was not at all traumatic.

4. What was the last movie you saw in a theatre?
A Christmas Carol. The Jim Carrey version. It was really good. We saw it in 3d. I am now realizing that we go to the movies even less than i thought, if that was the last movie we saw. We are going today for our anniversary date. Going to see Unstoppable, i think. :)

5. What do you wear to bed?
If i'm freezing i wear pj pants & a tank top. But usually i wear a sleepshirt or nightie. I guess that is what they're called? A long t-shirt or short gown. They are sexy AND comfy. =)

Well, there ya have it. Hope you all have a great weekend!
Posted by Melissa at 11:11 AM
Email ThisBlogThis!Share to TwitterShare to FacebookShare to Pinterest
Labels: 5QF, memes, work