14 years ago today, I had my first date with Brad. I had known him {off & on} my whole life, as our parents met in church when i was just a baby & when Brad was three. Some of you already know this story... our parents became good friends & began to hang out, so i remember playing at their house (& them playing at mine). We didn't see them for several years (around middle school), but in 1996, my parents began to attend Covenant, and the Venable's went to church there. I stayed at Victory, where i was, because i was very much involved in the youth group there & i loved it. I had a minor crush on Brad, and went to church with my parents at Covenant a few times, for that reason. After several Sundays of this, i got a clue & went back to my own church & forgot about Brad {as more than a friend}.

Then, one day in November, the phone rang. I remember sitting on the couch watching TV. My parents were in there & my sister probably was, too. Someone told me i had a phone call & handed me the phone. I was shocked to hear Brad's voice. I was even more shocked that he asked me out on a date! I was 18, but that was my first "real" date. I'd had boyfriends before, but not ones with cars. :) Ha!

His work was having a Christmas Banquet & they were supposed to bring a date. He wanted to know if i could come. As his date. I said yes. We hung up. It was not a very long conversation. We are both kinda shy until we get to know someone. But i just about died of excitement after we hung up the phone!

He asked me well in advance. I could hardly wait. Weeks later, we had our first date. It was a dressy christmas party, and i wore my long dress that had black velvet from the waist up & was red & black gingham on the skirt part of it. YES! HAHA! (It wasn't out of style at the time...lol). I was thankful we were seated at a table with about 4 other people, including Brad's sister & her date (they worked together back then). It was less awkward that way! But the next weekend he asked me out again... & the next weekend again. And we were inseperable for the next year. Until we broke up on January 4, 1998.

CRAZY STORY! But a good one! Even now, i will sometimes look at him & say, "I can't believe we are married!" Hard to explain, but if i'm not thinking about it, it's just like he's a guy i met in my late 20's. And then i remember our history... our first date... our first relationship... our breakup... trying to get over him... and then a call from him after not hearing from him in 11 years!?!? And still not thinking he was "the one"! It's all pretty crazy, really. :) But a good-crazy. 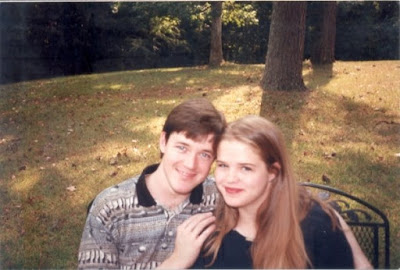 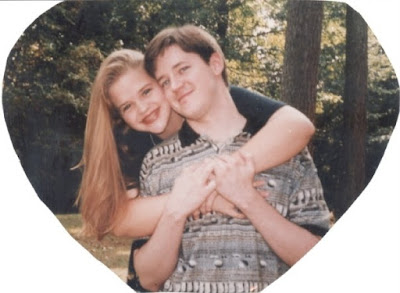 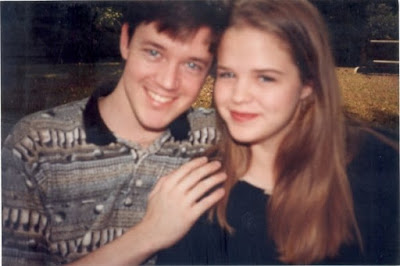 P.S. If you haven't heard our story before, you can read all the crazy details by clicking on the tab at the top that says, "our love story". :)

P.P.S. Get a good look at that hair color...that would be au naturale. I had never highlighted my hair at that point. I may have to go back to that in order to save some extra money...been a LONG time since i've had brown hair! :)
Posted by Melissa at 9:08 AM
Email ThisBlogThis!Share to TwitterShare to FacebookShare to Pinterest
Labels: anniversary, BlogBook, Brad, Date, our love story