It went well last night! I did not get there until about 5:45 - & was expected at 5:00. I left at 4:30. Traffic was INSANE. Took me forever to get downtown & then to find a parking spot. But, they were having ALL KINDS of downtown activities last night - a "reindeer run", christmas tree lightings, fireworks, i mean all kinds of stuff! Not to mention the concert. So it was okay.

{Side Note/Warning: At some point, i decided to give ALL the details of last night in this post. Some may be more than you care to hear AND it makes for a very long post! So just you know...feel free to skim or skip entire sections! HA!)

When i arrived, there was already a line of people waiting to get into the concert. The first woman in line had arriaved at 8 am - in the MORNING! I mean, really?! I kind of wanted to tell her that she could have come at 4 pm & still gotten first in line... just sayin'. Everyone was lined up at one door, but we planned to open both doors when it was time...when Stephen told them that half of them could move to the other door - that woman kind of went ballistic. I mean, CALM DOWN, lady, you are STILL the first in line! Hahaha.

Apparently this woman follows them wherever they go. Is that sad? I think so... 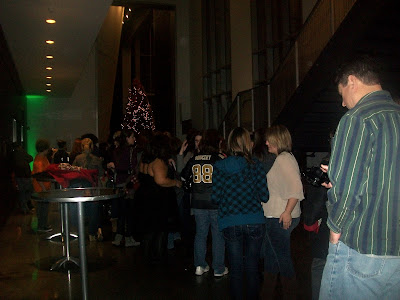 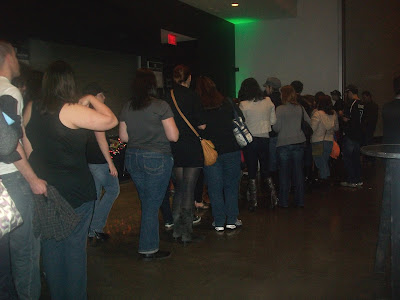 This is actually after the show - people waiting for an autograph. But you get the idea. CRAZY!
Backstage was a different world from the lobby. The lobby was PACKED & loud & full of crazy women! Haha! Backstage was quiet. The band members stayed in their dressing room getting drunk hanging out most of the time. I didn't even see them for the first hour & a half that i was there. They also had a publicist (Layney, who was SO sweet), a tour manager (Marty) & a sound guy (Scott). And the sound guy's dog...Gus. Yes, a dog traveled with them! VERY sweet & well-behaved dog, i must say! Half Border Collie, half Australian Shepherd. I must say, that is the first time i've had a group bring their dog! I'm glad he was a good dog! & you could tell he just LOVED being on tour with them! :)

Sometimes being a Rep means keeping people OUT that should not be backstage. That part is never my favorite... i don't like being bad cop... but i also think people who just feel entitled to come backstage deserve to be kicked out! This show was one you'd expect crazy fans to just come marching backstage... so i was standing by the doors waiting. I was told that there was a list of like 25 people that could come backstage. And that if they were on that list, they would have a blue wristban. I was told that these people didn't have tickets...that they could hang out backstage & watch the show from the wings. UGH.  I was NOT looking forward to that. Backstage is supposed to be the artists & whoever is with them & our people. That's it. I cannot stand scores of audience members backstage. Not trying to be rude. But the general public does not seem to understand what being in the way means.

HOWEVER! It went a lot better than i thought! They came in & stood in line & were definitely out of the way. Layney would come take a group at a time back to the dressing rooms to meet & take pics with the band. Then she would escort them out & take the next group. It was not 25 people & they apparently DID have tickets, because they went back to their seats after the meet-and-greet. The only ones that didn't were my friends Mary & Chase... which i didn't mind because they do know how to stay out of the way & they kept me company. :) All that to say, it went really well!

One part i hated. At one point - near the end of all those meet-and-greets - i was told by one of the house managers that a couple was waiting outside of backstage & that they were supposed to be on the list but weren't. I went out & talked to them & considering they were very nice & NORMAL, i believed they were being truthful. The lady said she knew Jerad in the band & that it was fine if they couldn't go backstage, she didn't want to mess them up. I told her not to worry & went inside. Layney was in with the band members so i just waited until i could ask her. You know...following protocol. But then, Marty walked by. Their tour manager. So i told him. And i told him the chic's name. And he said, "oh yeah, i saw them waiting, they can definitely come in!" So i go back out & told the couple to come on in. Then, when Layney came out, i told her the situation & that Marty told me they could come on back. So she goes up to Marty & says "who is the couple you said could come back here?" & he looked like he had NO CLUE what she was talking about (this is all RIGHT in front of the couple, i might add!) & then they both looked at me & i pointed to the couple...& then Marty makes a face to let us know he has no clue who those people are. So Layney says it's all fine & goes back to the band to ask them, i guess. And Marty looks at me like "what the -  ?!" & i said, 'you TOLD me they could come back here! I just asked you!" LOL. And it turns out, he was talking about someone else. Even though i gave him their first & last name! HAHA! Anyway it was just kind of awkward & made me look bad. Turns out, Jerad DID want them backstage, but forgot to put them on the list. Layney came out later & said no one else backstage w/o the wristband. I apologized & told her i NEVER would have let them in if Marty hadn't given me the okay! She said, "oh, i know, that's fine, they did want to see them! But just letting you know...no one else after that!" She was really nice but i wondered if she thought i was nuts... haha. I mean, it was very understandable from my perspective, but she didn't see exactly how it was handled... she only knew that i let people backstage without a wristband! Aarghhh.


Well, i forgot to mention that part of the proceeds from the concert was going to benefit Runnels High School. A band from Runnels was going to open the show. They are juniors in HIGH SCHOOL & this was their first "real" show (though they've played in restaurants, that's about it). And they were opening for 100 Monkeys! Pretty big for them! I have to say - they did GREAT! They played WAY too fast (because of nerves!) & cut a 45 minute set down to about 30 minutes! HAHA! But they sounded great & the crowd was good to them! Before the show, 100 Monkeys emerged from the dressing rooms (finally!) & just started talking to the high school band. SO NICE to them! Just soooo not "oh, just a bunch of stupid high school kids". They took pics with them & talked to them & then when the kids went to play, they stood in the wings & watched them & cheered for them! I loved that. Loved it!


The actual concert went well. I am not a HUGE fan of rock, but it was funky & i liked that. :) They switch instruments for different songs, which i thought was freaking fantastic!!! They had a flute & a trumpet in some of their songs, too! Pretty cool. The show itself was great, i watched a lot of it from the wings. At one point a group of about 5 were looking for Marty. I told them i'd find him & see if it was okay for them to come on back... considering they knew his name. I turned to look for him & they all followed me backstage! I was like, "NO! Sorry! Please wait outside & i will get Marty." They said "oh, ok, sorry!" but looked TICKED. I found out that was their producer & a makeup artist & some other people like that! Well, how was i supposed to know?! But they were very nice later (when i let them back) & understood i was just doing my job.

I loved all the guys in 100 Monkeys. They were all VERY nice & kind. They act like they have been totally unaffected by celebrity (even Jackson, who is Jasper in Twilight). They were totally nice & hugged me & thanked me as they left. Loved them!!

Layney walked by at one point during the concert & threw me a cd "that's for you", she said. So nice!

And at the end, after they did TONS of autographs, they stopped & took a picture with me & mary. :) 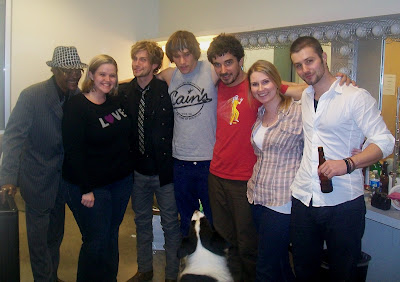 P.S. Aren't you so proud of me?! I brought my camera - and used it! :)
Posted by Melissa at 11:25 AM
Email ThisBlogThis!Share to TwitterShare to FacebookShare to Pinterest
Labels: BlogBook, Manship, music