Tonight we went with Brad's family to his sister's church for their annual Christmas concert. I went last year, too & it was awesome. They usually do several songs with just the church's band, soloists & choir & then they always have a guest artist to do a concert as well. This time, they had two guest artists...Saxophonist Nathan Woodward & the singing group, The Martins. 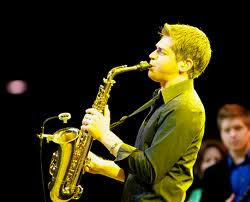 I absolutely LOVED Nathan Woodward. He was fantastic... I kinda wish i had gotten his cd! I absolutely loved hearing him play. Fantastic! I was grinning ear to ear the whole time. Wow! I love hearing people play like that! 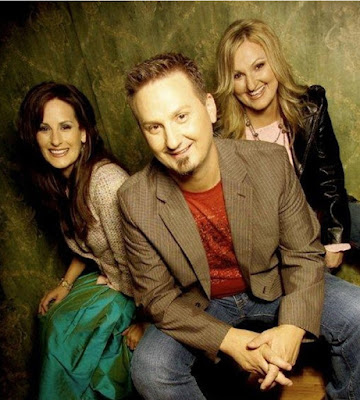 I wasn't sure if i'd enjoy The Martin's as much... i heard them some growing up & know they are a bit more country... not my favorite style of music. However, i was very much LOVIN their music! I think they sound better than ever, or maybe it's just that i love how they sing Christmas music, i don't know. But they sounded AWESOME. I want their Christmas cd, but Brad said his parents have it, so i didn't get it. I can borrow! But i really loved The Martin's. I also loved hearing them talk & goof off with each other. You can definitely tell they are siblings! :)
The youngest sister, Judy, talked for a minute about her battle with depression. She mentioned that she takes medicine for it. I absolutely understand that - maybe because people in my family have been through this kind of mental illness, or maybe because i myself have struggled with depression - either way, i get it. I know there are christians who have issues with people who take anti-depressants. Considering that, I thought it was very brave of her to tell that story. She explained how it has made her realize everyday just how much she needs her Savior. It was meaningful & i know a lot of people were ministered to by her words.
The group was hilarious & fun & sang soooo well together! I loved them. 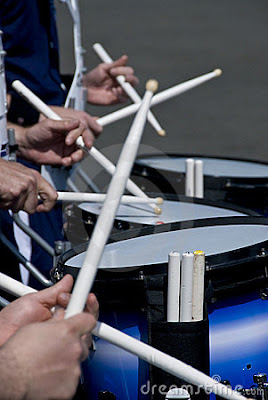 The absolute BEST part of the evening was Little Drummer Boy. Ohmygosh. Now, Jaimie (my sis-in-law) had told me that they were having LSU's drumline in to play this song. I knew it would be awesome & it was what i was looking forward to the most. It started off silent & then with just Shane (the worship leader there) singing it. He sounded awesome. He was down stage left & another guy was downstage right playing the violin. They had 1 guy playing on a drum & then at some point 4 more guys joined him. They played a lot & at some point they ran off stage & the church drummer picked up where they left off. Then they came back with garbage cans & continued to play there! At the end they sang it again - Shane & the entire choir. I CANNOT TELL YOU HOW UNBELIEVABLY FANTASTIC IT SOUNDED!!
I actually had tears in my eyes. I was so moved. Brad saw my face & said, "I have GOT to take you to a drum corp!" - something he's told me about before. I was just totally amazed. I could have listened to them all night! I totally regretted not videoing it with my camera! By the time i thought of it, it was almost over.

SO GOOD, y'all.
It was a great night. I've been a bit depressed this weekend. Some things in life not going my way {i know - whine whine, right?!} & it's just had me really down. It's been hard these last few weeks. Especially this weekend. There is something i am dealing with right now that is just...no fun at all... I am not at liberty to discuss much more than that. But just know that i have cried a lot of tears today & yesterday. And when i haven't been crying, i have been just REALLY down. I kind of feel like i have no PURPOSE. And i hate that feeling.
Part of the reason i wanted to get into Crimes of the Heart was because it would be a great DISTRACTION. Something i kind of need right now. But that didn't happen. I was considering again tonight auditioning for Guys & Dolls... after coming to a peace about NOT auditioning! I still am not going to do it, unless i can come up with a song that i already know. But so far, i just can't think of one & don't really wanna have to stress about it! (Vocal auditions are tomorrow night!)
I just feel a bit lost. Without a purpose. When i stage manage, i feel like i have definite purpose. Performing gives me that feeling, too. My job? Well, not really...though i actually found myself looking forward to work tomorrow...just to have something to do to keep me busy. But still, it's definitely not something i feel like i was MEANT TO DO. What i really want is out of my reach right now. So i just have to calm down & be patient!
What i feel like is that there ARE some things i should be doing...things that can be a distraction & also make me feel like i have a purpose... and that is - work on my health. Pour my little heart into eating healthy, exercising consistently & cooking nutritiously. And work plenty at the Manship so i can save some money! Those are the things i should do! Those are the things i should fill my time with! Time will fly & before i know it, i WILL have the things that i am longing for. Because it is a desire that God put in me. It's just not the right time right now.
All that to say, tonight reminded me of Who is worthy to be praised & Who is the reason for this Christmas season. :) If i just focus on Him, everything's gonna be alright.
Pray for me, if you think about it. I need to be able to say what Paul said:
"I know what it is to be in need & i know what it is to have plenty.
I have learned the secret of being content in any & every situation whether well fed or hungry, whether living in plenty or in want. I can do everything through Him who gives me strength."
Philippians 4:12-13
P.S. **Don't forget to enter my giveaway!!!**
Posted by Melissa at 10:45 PM
Email ThisBlogThis!Share to TwitterShare to FacebookShare to Pinterest
Labels: BlogBook, church, faith, Lessons, music, Theatre