Wee Bit of Me.

Time for some wee bit. Yeah! :)
{one} What was your first job?
I watched the 3 year old class at a nearby preschool. i had the kids who stayed for aftercare from 3-6 pm. Those kids are now seniors in high school, i think. i have seen a few of them in the local newspaper as hefty strong football players at Central High (where i graduated). SCARY!

{two} Have you ever seen a stand-up comedian?
I want to say no, but surely i have as house manager at the Manship? I don't remember any, though...
{three} When was the last time you played mini-golf?
Oh, wow. I have NO idea. Years. Years & years. Maybe...10 years? 8? I don't know.
{four} What was the last picture you took?
This one... 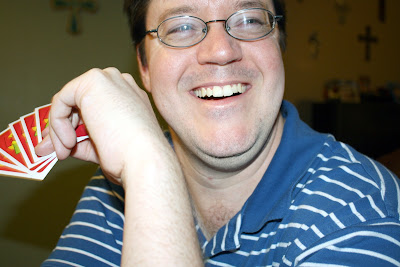 HAHA...obviously i wasn't looking at ALL to take this photo, & i was sitting next to him, not in front of him, so that is why his head is chopped off...& why it has not been posted until now. ;) But i love that smile!
{five} burnt food: yes or no?
Um, really??? NO! (though i do like my bacon & my hot dogs pretty near burnt. ;)
{six} If you have a pocket full of change, what do you do with it?
This just doesn't happen. I rarely carry cash. If i do, change goes in my wallet. And stays there, most likely. Right now, i doubt i have more than 50 cents in there!
{seven} Can you touch your tongue to your nose?
No, haha.
{eight} Do you scrapbook?
No. I used to. I have completed scrapbooks from the 90's - back before they had scrapbook stores & all these embellishments! My scrapbooks definitely got better & more creative as the years went by. But there came a point...around 2007 or 2008, where i got SICK of it. I didn't want to do one more scrapbook page. I lost all interest, for some reason. And i'm okay with that. I'd rather blog & print photo books.
(I do enjoy looking at other's scrapbooks, though!)

{nine} Do you buy lottery tickets?
Nope. I never have. But everyday on my way to work, they have a giant billboard that says how much the lottery is for... when the sign first went up, it was for 50ish million. Today it was at 101 million. I mean...WOW. My thoughts usually go to what i could do with that much money. Or how i wish i just had 5% of that much money! And then i tell myself to shut up & be content with what i have!! And thankful that i have things money can't buy! :)
{ten} Do you prefer to be in front of the camera or behind it?
It doesn't matter to me one bit. I love taking pictures but i definitely do not hide my face if someone is snapping photos. Even if i look terrible. I just don't care! I'll smile for ya! Haha.
VIDEO cameras, on the other hand, are a different story. If i see someone doing interviews or something, i will avoid it at all costs. I love acting, but i don't like being interviewed! Like the news guy that was standing outside of Barnes & Noble recently, trying to catch someone to interview. I don't know what that was about but i waited in my car until he had stopped someone else! HA!
Thanks, Leigh Ashley! Love me some Wee Bit!

Posted by Melissa at 9:03 PM
Email ThisBlogThis!Share to TwitterShare to FacebookShare to Pinterest
Labels: memes, Wee Bit of Me