So, for those of you who don't know, I'm big into theatre. I know i have some new followers since my last show, so I thought i would explain. I auditioned for a show at the local theatre in 2006 & since then, i have become a permanent fixture there. I absolutely love to perform & to act as stage manager. When i got into it, i had only acting in mind, but somewhere along the line i got thrown into stage management & i love it! To date, i've performed in 5 shows & have stage managed, ohhhh, about a zillion. (I really don't know how many. A lot!)
I did just about every show back to back for a couple of years. But then i fell in love. {Sigh!} Brad beat out theatre as the passion & joy of my life. But theatre is still a huge love of mine. And every once in awhile, i gotta feed that passion! I begin to miss it & ache for it! Brad understands, because he is a musician. He always says that telling me not to do theatre would be like telling him not to do music. And that's just not possible. Even though when i'm doing a show, i miss Brad terribly. This is why i only do a show or two a year now, instead of every one or every other one. And i know my theatre time is coming to a close, as we will eventually start a family. (Not that i won't EVER do theatre as a mom, but not when the kids are really little!) 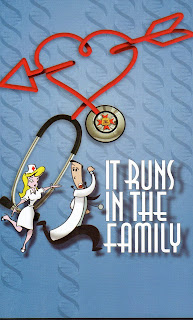 The last show i did was Sound of Music in June. Then i took another break. I started getting the itch again earlier this year. So I'm now stage managing It Runs in the Family. I am thrilled to be doing this. We have an excellent cast, a great director & the show itself is HILARIOUS! I'm pretty much cracking up through the entire rehearsal.
I will still be blogging, but will only be able to do posts on the weekends & at work. And work these days is EXTREMELY busy. They blocked Facebook recently, and honestly, i don't even notice anymore. I am too busy to care. My job has been VERY stressful & challenging...sometimes in good ways (where i feel challenged & where the time flies!) & sometimes in bad (some tears may have been shed). So if i'm not around a whole lot during the week, don't worry. I'll catch up with you on the weekend!

The rehearsal schedule covers the entire month of April. It's kind of scary, because honestly, I've gotten used to being at home in the evenings & i love it. But you know... i love theatre. And theatre's at night. So for April, i'll pretty much be at home just to get ready for work & to sleep! Haha! It's fun but it's also EXHAUSTING! Plus, i'm maintaining my exercise schedule. So this is my schedule for the next four weeks (including this one):
Sundays
Church 10:10-12ish
Theatre 6-9
Mondays & Wednesdays
Work 8-4:30
Body BaYou Bootcamp 4:45-5:45
Theatre 7-10
Tuesdays & Thursdays
Work 8-4:30
Gym 4:45-5:45
Theatre 7-10
Fridays
Work & maybe workout & then HOME!
Saturdays
Body BaYou Bootcamp 8:00-9:00 am
FREE DAY!!! :)
YEAH. Pretty crazy! You're probably tired just looking at it! Me, too. And 7-10 is the actual rehearsal... Stage Managers are the first to arrive & the last to leave! But it's so worth it. I'm loving this cast & show! The first week of May will be tech week (aka, hell week) & then it's performances for three weekends. But those weeks aren't as busy because you're free Monday - Wednesday. :)

This week has been good so far. I am EXHAUSTED & having a hard time getting up each morning. But i'm really enjoying rehearsals & i am feeling great physically (actually i'm sore from head to toe, due to bootcamp. But that's another post!).
Just a little explanation of why i'm gone... if i am unable to blog as much as i like! I'll definitely make up for it on the weekend! And i'll be sure to post pics of It Runs in the Family! My first show since getting my Canon Rebel! Woohoo! :)
Wish me luck! And lots of energy!!! :)
Posted by Melissa at 9:14 AM
Email ThisBlogThis!Share to TwitterShare to FacebookShare to Pinterest
Labels: BRLT, Stage Managing, Theatre