Last night we went to one of the most entertaining weddings I have ever been to. Seriously, we had A BLAST at Erin & Jonathan's wedding. The ceremony was beautiful, the music totally our style, & the reception was just plain FUN! Yay!

Erin was the worship leader at HeartsEase (where Brad & I went to church before). She is a phenominal worship leader & we really miss being a part of the band with her as our leader. She is extremely gifted musically, and she's a lot of fun to be around. Erin has waited for her husband patiently, knowing that God would bring her the right person in His timing. I was thrilled when I heard she was getting married! I have enjoyed the few times I've gotten to talk with Jonathan - he has a great sense of humor! And the way he looks at her, well...there is no doubt in my mind that he loves Erin with all of his heart! 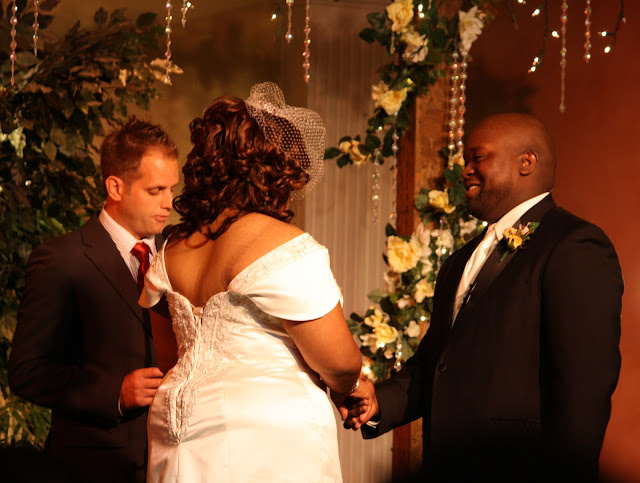 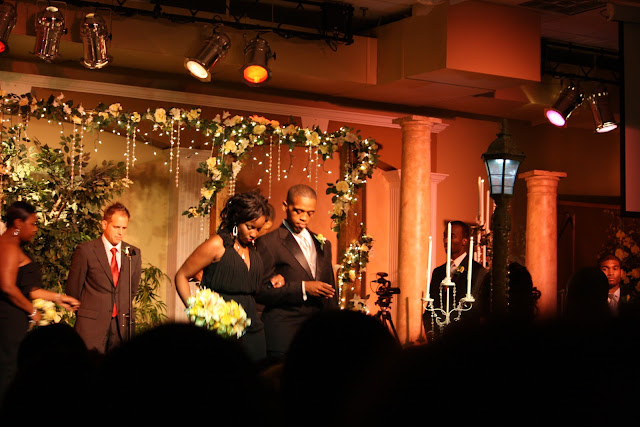 Ooh! Good story! Ok...some background...Erin sang "At Last" by Etta James at our wedding, as we were walking out of the church after saying our vows. Then, last year, we were at her sister Megan's wedding reception & all of a sudden we heard someone singing "At Last" with the live band...& it was Erin. It was AMAZING...everyone was cheering & clapping as she sang. She was UNBELIEVABLE. You will not believe me if I tell you that she is better than Etta James herself, but I truly believe that she is. And so does my husband who is a musician & who is very gifted in that style of music, more than any other. He LOVES the way Erin sings this song. We couldn't stop talking about it!

So when we got to the wedding yesterday, they handed us the programs, and they were kind of in the shape of a CD case. The inside had the program & a pocket with a CD in it. It was music that we assumed would be in the ceremony or at the reception. I noticed that #5 was "At Last" with Erin's name by it. I showed Brad & he got all excited & was like, "That better be her singing it on the CD!" I said, "Of course it is! They wouldn't put her name on it if it wasn't her! I bet she went to a studio & recorded it!" We still had no idea she would sing it during the ceremony.

After Pastor P had them face the congregation & pronounced them Mr & Mrs, Erin turned around & reached for something from Megan, the maid of honor. I thought she was reaching for her bouquet, but saw Megan place a microphone in her hand! And i started bouncing up & down & hitting Brad's leg! HAHAHA! She told everyone she had a surprise for Jonathan, looked at Jonathan & told him to have a seat! And she sang "At Last" to him. And she NAILED it! His face was just priceless. The audience was on their feet with applause as soon as it was over! Ahhhhh...it was awesome! 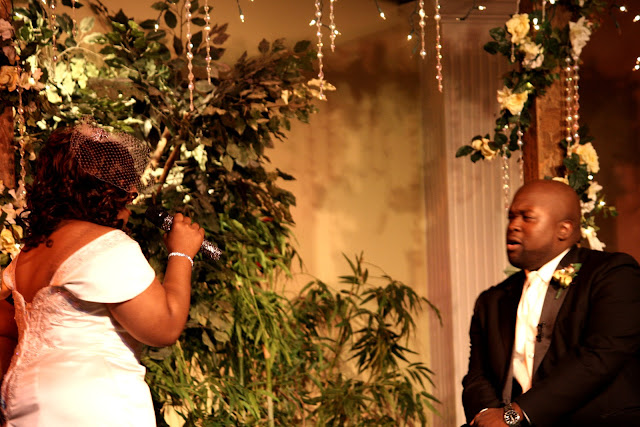 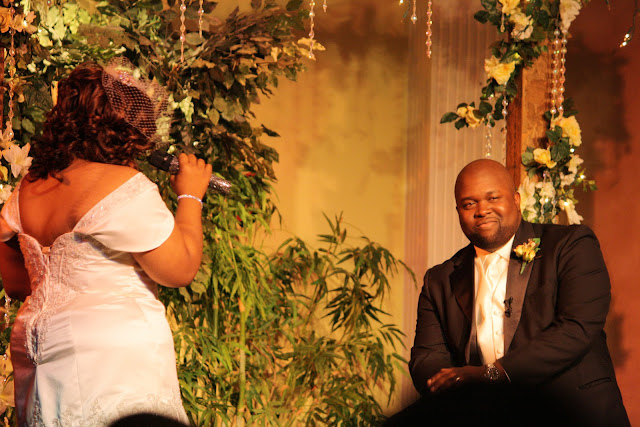 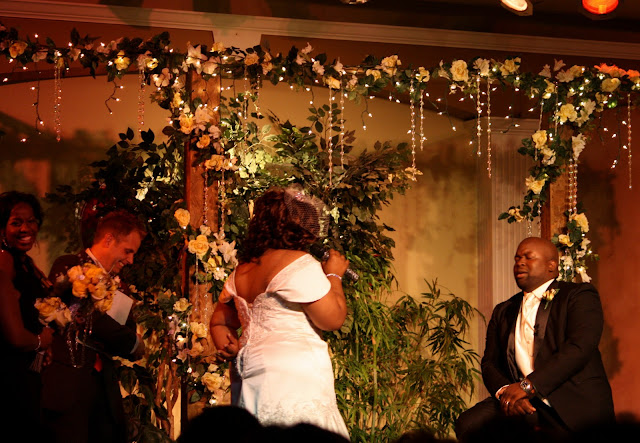 My favorite shot...she's really belting it out here...& of course he's getting in to it! It was the BEST! 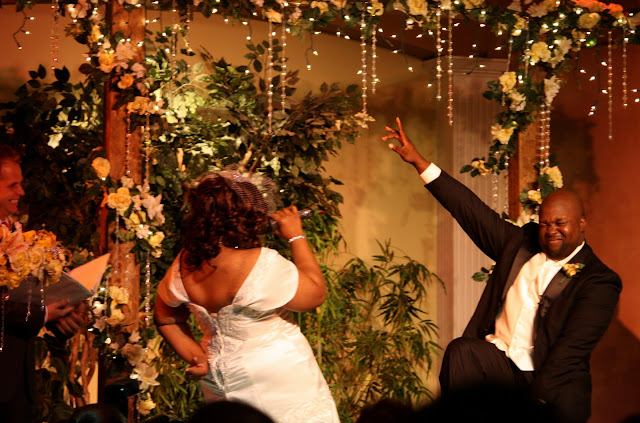 I can still hear her singing it! WOW. I will share it here one of these days! I am sure it will eventually find its way to you tube! :)

This is one of my favorites. 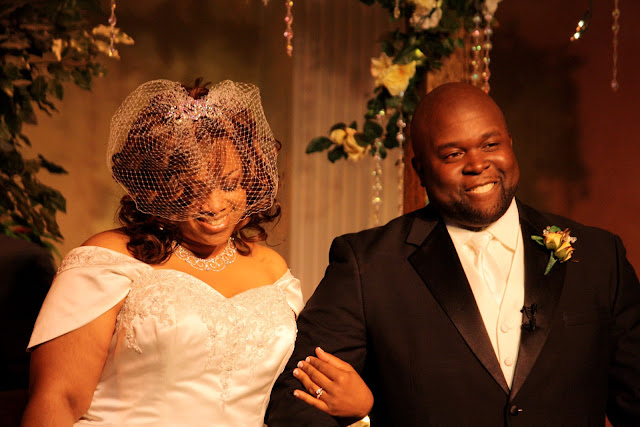 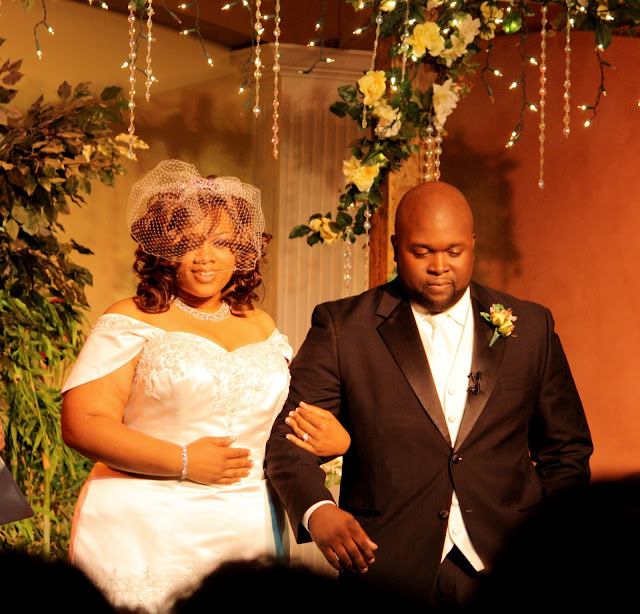 His facial expressions crack me up! He is proud to have her by his side! 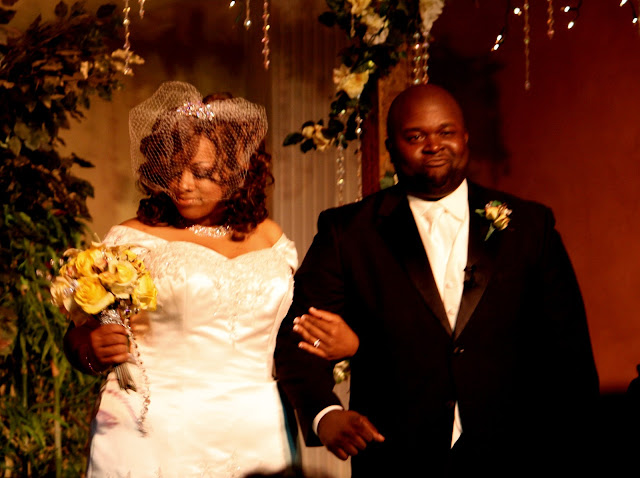 This one's kinda blurry, but i just love how he's looking at her. :) 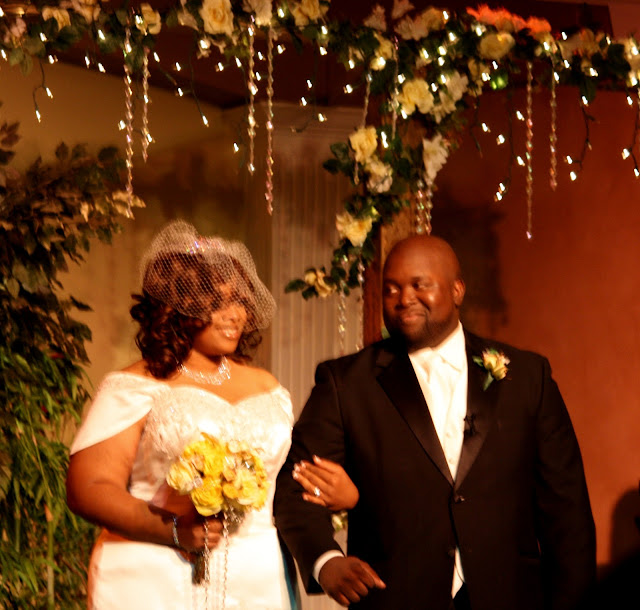 Congratulations to the Newlyweds!!!