So, opening night was awesome. Fantastic. Perfect. In my opinion, of course. It went without a hitch.

Well, there was one little hitch. I'm sitting in the sound booth when i heard a loud crash. More like the very loud sound of glass shattering (emphasis on very, loud & shattering). I was looking down at my script so my head popped up & i was frantically looking at the stage to see what had just happened. It sounded like that's where it came from. Nothing looked out of place. Then i realize. It's from about 1 foot in front of the sound booth. The light fixture above my head in the ceiling busted or something! And glass flew down, hitting the back of the seats on the row right in front of my booth! Thank God nobody was sitting there! It was the only row empty in the house! Can you say... God? Well, I think so! I think He very much protected me & the audience members last night! I give Him the praise & thanks for that, I must say! Anyway, the play went on (although I'm sure the actors on stage were like, WHAT THE HECK WAS THAT?! - they kept going). Keith (the director) had been sitting to my right & he jumped up & went to check it out. Then he sat by it until intermission, when it was swept up. Everything was fine. Thank Jesus! But wow. How scary!!!

OTHER THAN THAT, THOUGH! :) It was a great show!

Preview Night was perfect but pay-what-you-can night felt just a little "off". Nothing major, probably nothing the audience noticed, but definitely something I myself noticed & the actors noticed as well. I was actually glad it happened that way. If it went perfectly then i would worry that something would go wrong opening night. Haha. It just seems to work that way, I guess. But opening went very very well & I was so calm & confident about all those sound & light cues! 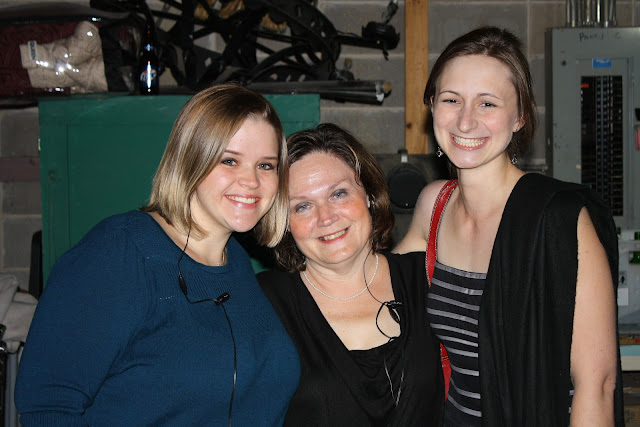 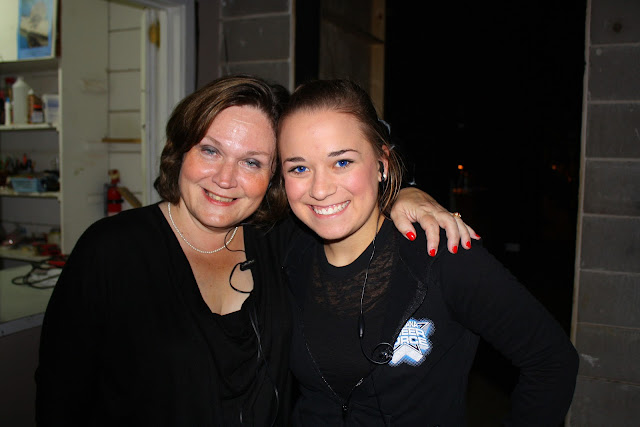 Beth & Katelyn. They are my stagehands &  have a lot of work to do between scenes, during intermissions & before the show altogether. They keep it all running smoothly & i am thankful for a great crew!

I took some pics during the show because Keith needed some to email to the paper. I am an amateur. Not only that, but when i don't use a flash, i have to be VERY STILL. And so i am. But if the actors move, their hand is blurry in the pic (or whatever they were moving). I still got some decent shots and Keith sent 4 of them to the newspaper at intermission. Yikes! I edited them today & by edit, I mean just straightened them and brightened a few of them. A little cropping. That's it. I am no expert & basically just play around when editing. Still, my edited versions look way better than the originals, so i'm kinda scared about which ones he sent! Haha! Maybe The Advocate will edit them?! Several of them were crooked, which i straightened using Picasa. Anyway... here are a few of them. 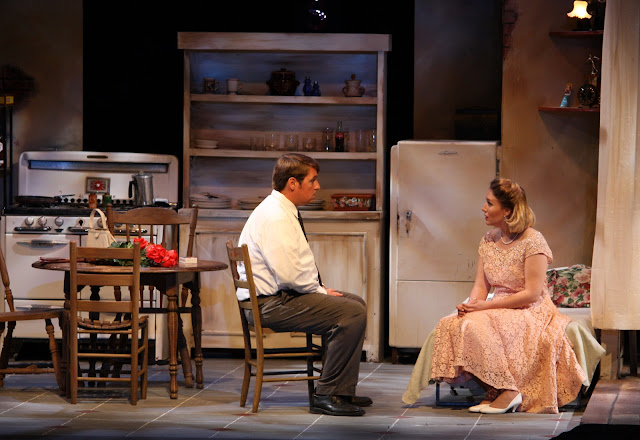 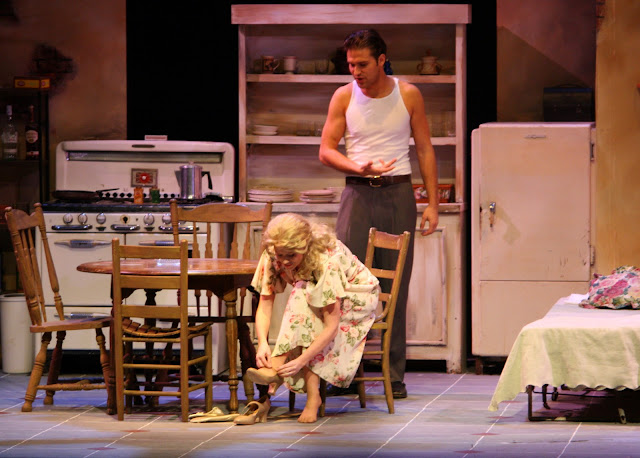 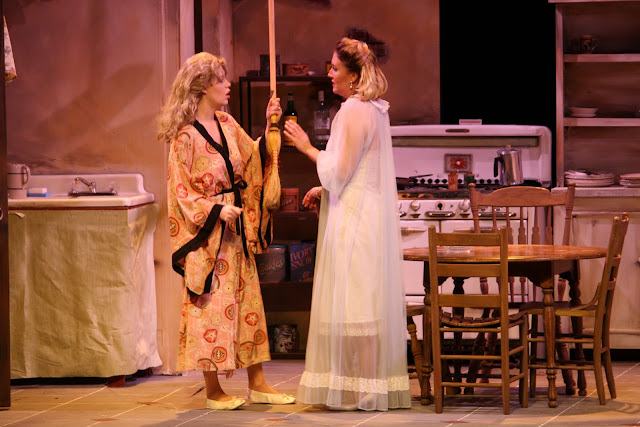 Kaitlyn & Bess...love working with both of these girls! 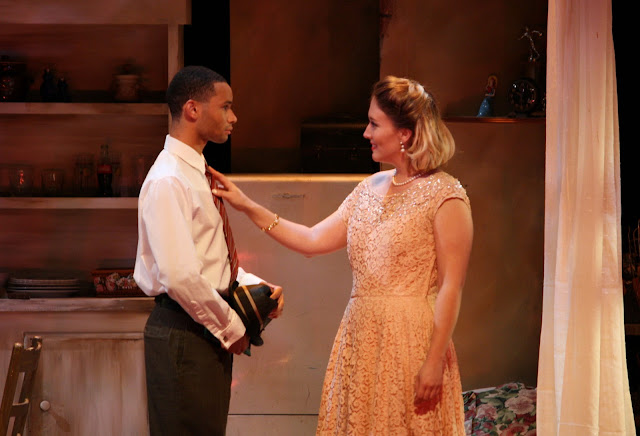 Blanche & A Young Collector. This scene... i love it. I don't know what it is about it. I just love it.

I took a few pics during intermission as well... 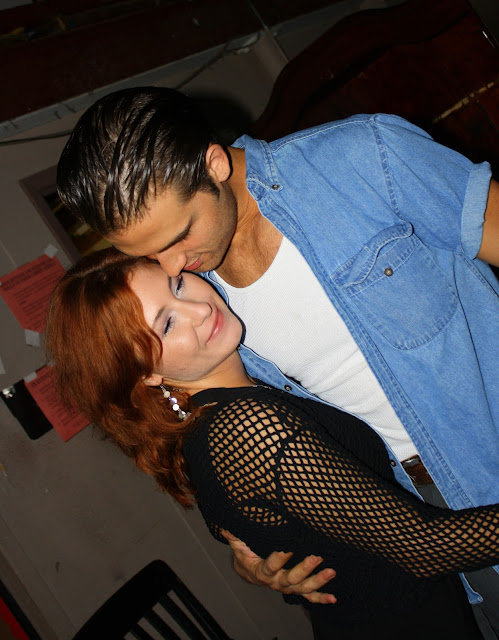 We have a couple of lovebirds backstage. :) Our lead guy, Samuel, with his girlfriend, Rae. She is one of our costumers. 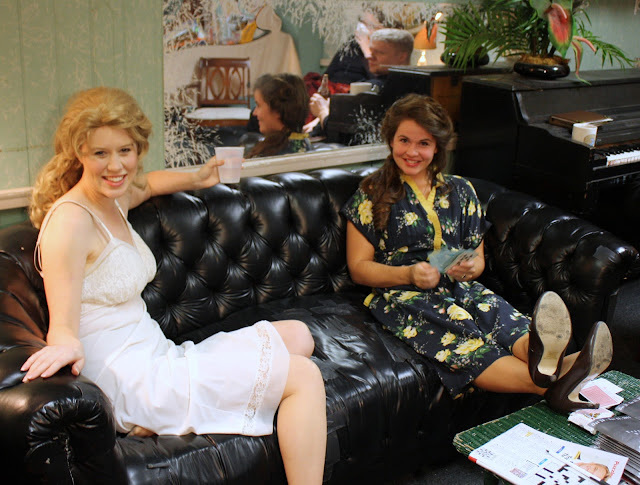 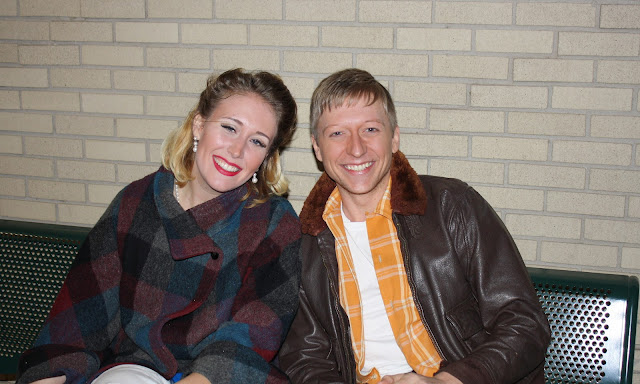 Kaitlyn (who plays Blanche) & Casey (who plays Steve (who is married to Eunice)). Casey joined the cast a week ago, after the guy who was originally cast had a freak accident (cat bit him...& he had to have two surgeries because of it!). We miss Jeff, but are thrilled and thankful to have Casey. He's doing a great job! And Kaitlyn is...well.. brilliant.

After the show we had the traditional opening night reception, celebrating with champagne & cake! 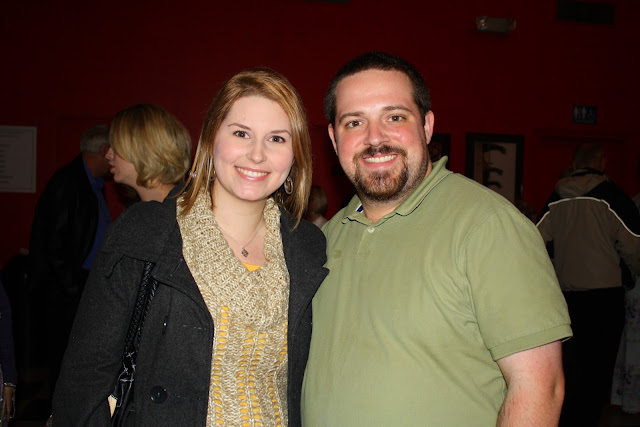 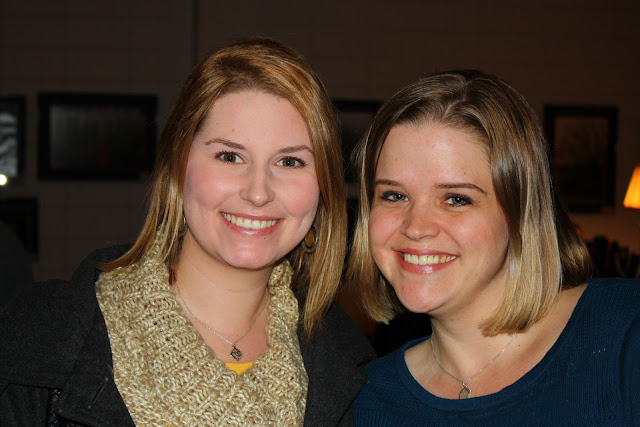 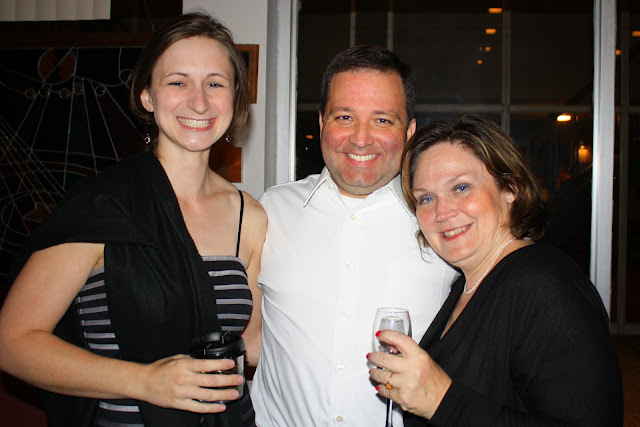 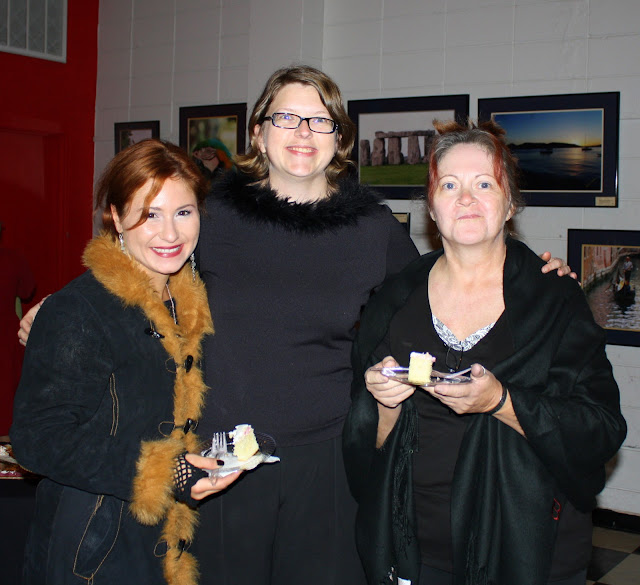 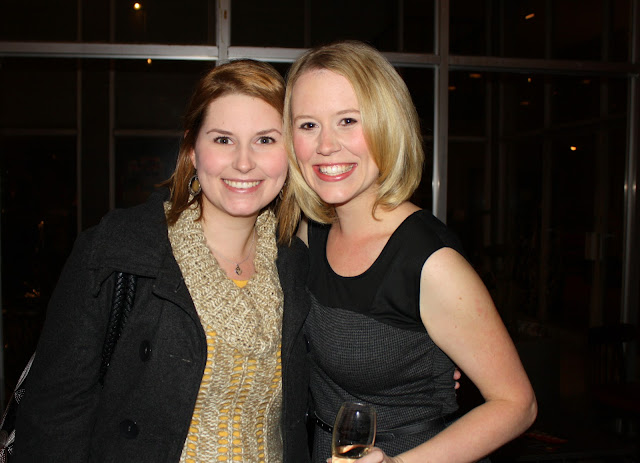 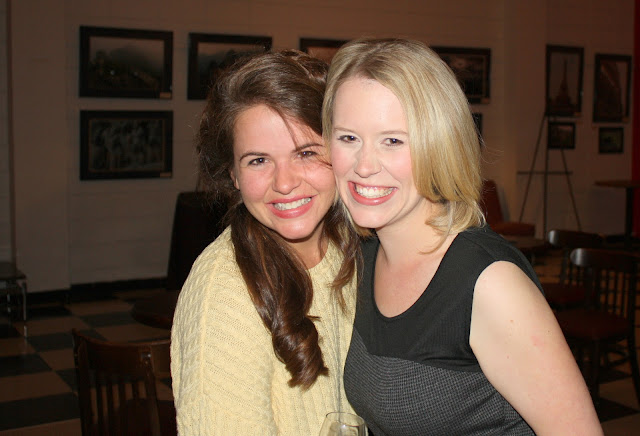 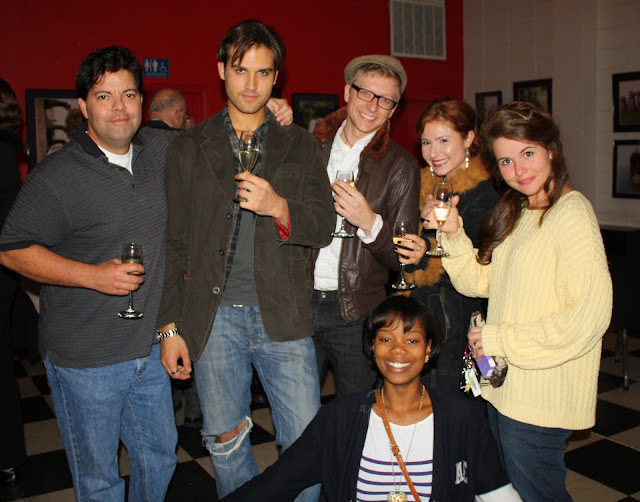 After the show, a bunch of us went to eat at Chimes East. Yummy! I have not been eating out at ALL because we are trying to not spend on anything extra since i am out of a job. But i had not eaten dinner before the show & was STARVING & really was not done hanging out with the cast! I called Brad to see if he minded since we're on this tight budget... he told me to go, it was opening night, after all! :) We had SUCH a great time & I didn't get home till almost 2 AM! Oh, wow! I never ever do that anymore! This cast is lucky, because usually casts go out after rehearsals & I ALWAYS decline & go home! Haha. But I was full of energy last night! It was me, the director (keith), my ASM (beth), our other friend beth & 5 or 6 cast members. I didn't bring my camera in, though. We had a a wonderful time! (I am not going to tell you how late i slept this morning! I was kind of horrified! Hahaha!)

Remember in the beginning how i truly couldn't believe i had agreed to do another show? I was just helping out at auditions, but not planning to do the show seeing as how my sister has a wedding the last weekend of the show! But i fell in love with it during auditions... & the director got that last weekend covered so that I could do the rest. I am SO GLAD i remained a part of it, even when i thought i had lost my mind. It has been one of the BEST stage management experiences I have ever had.

Looking forward to another run tonight! And tomorrow is a post-show discussion with the audience! I actually love those... they are usually on the first Sunday & the audience asks the actors questions. It will be very interesting & I am excited about it!