Why I really went to Pennsylvania.

{Warning: This is an incredibly long post. Come back if you need to!}

Y'all. I had an amazing time in Pennsylvania with Laura!
I have to tell you something. This trip? It was a total God-thing.
I knew it would be when it was first planned, but I had no idea how much. Apparently, God has been hearing my prayers. He's good at that.
I don't even think I realized just how He was answering my prayers, until probably Tuesday. The day before I left Pennsylvania.
What prayers, you ask?
Well, here's the thing. I used to be a holy roller.
And, by holy roller, I do not mean an annoying Christian who does nothing but shove Jesus down your throat. Those of you who are starting to freak out a little bit? Don't! :)
It's just that, I used to be sooo in love with Jesus. Everything I did was out of a desire to do what is right. I loved to go to church. I loved reading His word. I was what we nondenominational folks call PRAYER WARRIOR. I would get on my face & PRAY. I taught Bible studies. I gave my all to God in praise & worship. I used scripture to fight the enemy or to take captive thoughts that went against what God had for me. I was passionate about Christ. Sometimes bold about it and sometimes fearful, but passionate. And longing for more of God & less of myself.
I have lost that over the last 4 or 5 years.
I know why. And I hope those who were around at the time know what I am talking about. But in 2006, my church... my awesome, incredible, fantastic church... SPLIT. Something happened, someone left, people followed him, people stayed put, and people found new churches altogether. And some people just decided that it wasn't worth it, and quit. To this day, they have not gone back. They do not even profess to be Christians. I believe that anyone who was around then would say that what happened affected them in some negative way, even if it all turned out for the good (which I believe it did for many. God takes care of his kids.).
Church splits are no joke. I miss what we used to have. My best friends & I went to church together & all of a sudden, we didn't. We led a Bible Study together, and that was gone in a matter of seconds. We had an incredible youth group & that was gone too. Many of us held our church & pastor up on a pedestal. I don't know that I did,  but I do know that I thought what we had was pretty good. But it was all gone. OVER.
At the time, God took care of me, and I knew it. He led me to a church, totally separate, and made it crystal clear that it was where he was leading me. He did great things in my life at that church. And great relationships were started there... people I hope I will be in touch with for a long time.

The church split was in March 2006, I began attending the new church that same month, and I began doing theater just two months later. Theater was an awesome thing for me, a place where I fit in after not really feeling like I fit anywhere else. I revived an old passion, a passion for the arts, and I am still certain that was a God-directed move. I did fine with it for awhile, but it did get harder for me to stay active in church AND do theater. Rehearsals are very time consuming! I know plenty of people who do theater and church, but I didn't. And that was part of my problem, I think.

All of this to say... a series of events caused me to spend less and less time with God. After 3 years or so at that church, we felt like God was directing us somewhere else. Have we found that place? I'm not sure. I do not feel like we've given it much of a chance where we are. But no, I don't feel like we fit there yet. I do feel like we may, as we get more involved. In the midst of all of the uncertainty about church, there were many MANY weeks where we didn't go at all. Our attendance was just sporadic. I do not feel like that makes you a "bad christian", but i DO think it definitely kills some of the fire. Unless you are spending time in prayer & in the Bible on your own. Which I wasn't.
In October & November, I went through some really trying times. I was struggling with physical issues that were causing emotional ones, if that makes sense. I was dealing with the stress of losing a great job & trying to find another one. Because of that, there were new financial issues to face. Brad's granny was on her death bed, I had Maid of Honor duties to fulfill for my sister's big day, and it was all just too much.  Just way, way too much. I found myself depressed & struggling. I found myself back in a major rut when it came to eating & exercise, something I had been working hard to overcome for 2 years. I found myself anxious and worried. And most of all, I missed God. I missed being close to Him. I discovered in all of this that He was no longer my best friend. He was kind of becoming an acquaintance. Ouch.
I repented and have asked God several times over the last several weeks to bring me back to Him. To ignite that fire that I once had. I want it back. I have despised the fact that I have decreased spiritually, instead of increasing. The fact of the matter is, that even though I don't want to shove Jesus down anyone's throat, I DO want to be known at the theater as someone who knows who she is & who knows God. The person they come to when they have realized that they can't do LIFE anymore on their own. God is real, God is awesome & God is the ONLY one that can free them of their hurt, pain, bitterness, addictions, fear & anger. He is the only one! And I want God to use me there in the way that He wants to.
I know this has gotten long enough, but I just have to say that spending a week with Laura was totally God-ordained. I knew it was, but I thought it was just because it would help me get back on track with my diet & exercise. She was doing The 30-Day Shred & getting back to her No Sugar plan, and I knew I would join her in this while there. I felt this would help me get out of my rut. And it did! :) I also felt like I might learn how to shoot in manual mode on my not-so-new-anymore camera. And that happened, too!

What I did not know is that God was doing more than I realized! He used this trip as a way to answer my prayers to get some of that passion & fire for Him back. Laura is ON FIRE for Jesus. She is absolutely positively on fire. She is passionate about the things of God. And she is not afraid to speak truth into the lives of others. I do have friends like that here, but it's not like I can go spend a week with one of them! We have work & other obligations. And I didn't even know that's what I needed! But taking a week & spending it away from everything here? A total God-idea. I have been praying for Him to draw me back to Him & I have been reading His word more than I had been before. I felt like eventually the fire would come back. I hoped it would.

It wasn't until Tuesday afternoon that I stood in Laura's living room,  realizing that a bit of that fire had infected me. I was feeling it. I'm still feeling it. And then on the plane ride home, I began to process it a little bit. God is doing great things in my life! He's bringing me back to that place! I don't know how fast or slow the process will be. I just know that it's happening. And that is a good thing! 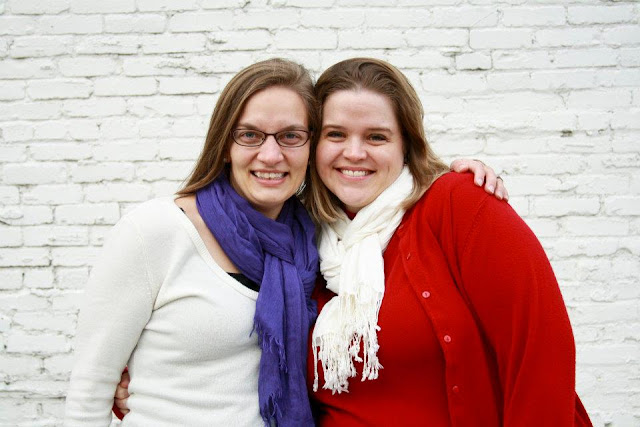 So, thank you again, Laura, for deciding to fly me up there to hang out with you for a week! And thanks, Kim, for chipping in on that plane ticket! I couldn't afford it, but y'all made it happen. And I cannot thank you enough.
God is good, all the time. :)
Posted by Melissa at 11:45 PM
Email ThisBlogThis!Share to TwitterShare to FacebookShare to Pinterest
Labels: church, faith, Friends, God