Another week in photos for you! 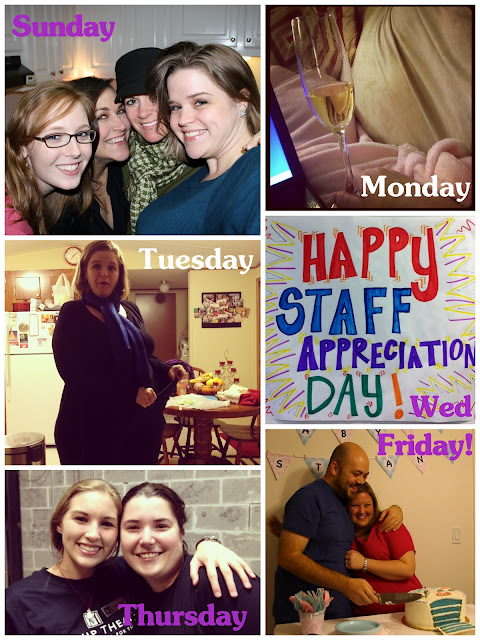 Monday, January 30th - Monday was a tough day. Came home & had a glass of wine & a long hot bath.

Tuesday, January 31st - My pants were literally falling off me! Down 24 pounds now! Woohoo!

Wednesday, February 1st - The students at school surprised the staff with a little love!

Thursday, February 2nd - Had to work at the Manship this night. Here are two coworkers, Logan & Erin. Love them!

Friday, February 3rd - Not exactly "my" picture, but it was definitely the highlight of my day! My friends, Amanda & Matt, had their Gender Reveal Party...this pic is just beautiful to me! I'll be posting it in full-size later, because it just makes me so happy! I attended via those hangout thingies in Google Plus... just so i could be there for the reveal! They live in Cali now, so they had other family watching that way, too. Anyway, as you can see by the cake, it's a BOY! So fun!!

HOW WAS YOUR WEEK?
Posted by Melissa at 11:08 PM
Email ThisBlogThis!Share to TwitterShare to FacebookShare to Pinterest
Labels: my week in photos, photography