Last year was the year where everybody and their mama got pregnant. Okay, not their mama. Just most women I know. They are the majority right now, these mama-to-be ladies. Well, THIS year it seems, is the year of the baby shower. And the gender reveal party. Because it's getting closer to the due date for all of these mamas-to-be. My point, you're wondering?

This gender reveal party thing has really taken off. And I love it. So much so that I'm writing a whole post about them, when I'm not even pregnant.

I sort of attended my first one last Friday. I say "sort of" because it was via the wonderful world wide web & Google Plus. I am not a member of Google Plus (i was for about a day), but i became one again when i realized it'd allow me to be a part of the gender reveal party for my friends way out in Cali! Anyway, so they had their gender reveal & this picture was a result. I LOVE THIS PICTURE. 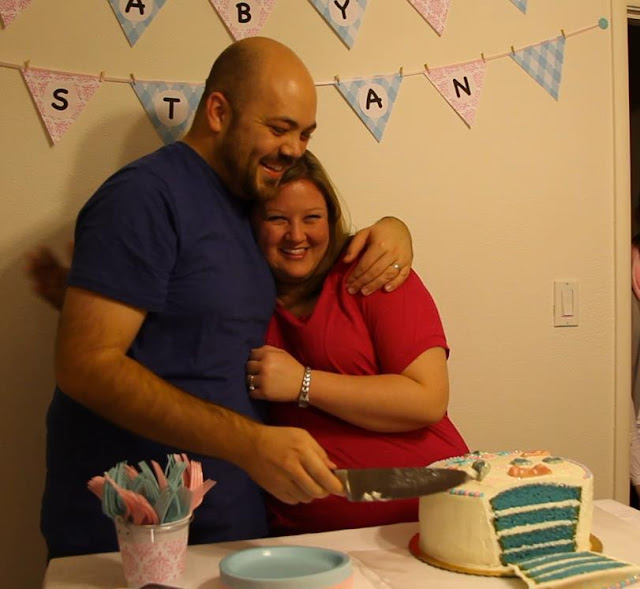 Now, if you're new to the whole gender reveal party idea, I will explain. I have seen this done two ways. One is where you (as the soon-to-be parents) find out at the ultrasound & announce to friends & family at the party. The other is where you do NOT find out at the ultrasound! Instead, you find out WITH your friends & family at the party.

The first time I ever heard of them was (you guessed it) another blog. E from E, Myself & I did a gender reveal party & she had the cutest theme & decor! She got them all from Etsy & I just loved the whole idea when i read it! She & her husband found out what they were having at the ultrasound. They spent that day together with it being their little secret as they went around town getting stuff for their Gender Reveal party that evening. They invited a small group of close friends & family & it was "announced" by having the two grandmas-to-be cutting the cake together. Everyone wore pink if they thought it was a girl & blue for boy & it was just a really cute idea. Check out that post here.

After that, I googled about them & I think that is actually how I found my friend Callie at Through Clouded Glass. I still read her blog, I just like her so much! She, too, had a Gender Reveal party. Instead of cake/cupcakes/cake-pops, they used a pinata to do the big reveal! I thought that was pretty cool & original! My friend Ashlee at Blessed Chick also had a PRECIOUS gender reveal in May & she later had a girl. Her post is here.

It was later on that I realized many gender reveal parties are where the parents do NOT find out what they're having at the ultrasound. They have the tech write it down & put it in an envelope, they take the envelope to the bakery to do the cake. So when the party begins, the only two people who know what sex the baby is, are the ultrasound tech & the baker (& maybe other hospital/bakery staff, but you see my point!). That's how my friends in the above picture chose to do it, mainly because they're out in Cali with family here in Louisiana.

I used to think i would find out & it'd be just our way to announce to close friends & family, but after seeing Amanda's, I think I want to find out what we're having at the actual party with our friends & family. It was just so cool! I have had several friends do their gender reveals both ways, so i definitely think either way is a fun idea!

My husband knows all about the Gender Reveal party from me going on & on about them. See, i used to want to be one of those weirdo's who didn't want to find out what she was having until baby is actually born! :) BUT i know my family would hate me for it, and Brad is like, "NO WAY! I have to know!" HAHA! This, to me, is a happy compromise. A fun way to find out & announce to close family before you tell the whole facebook world. HA! So we'll definitely do this, when the time comes, whenever that may be!

Tomorrow, i have a baby shower to attend at 11 & then a Gender Reveal party for my husband's cousin Megan. And then at the end of February i am going to another Gender Reveal! Fun times!

Of course through Pinterest, I have seen a zillion cute gender reveal party ideas, so i will share a few here!

Source: brynnandashton.blogspot.com via Brynn on Pinterest
Lots of different ideas to cast your vote.

Source: blog.amyatlas.com via Amy on Pinterest
Lots of times, the food theme is the mama cravings! Cute idea!