Today was awesome. Seriously. First of all, it's GORGEOUS outside.

Second, it was full of family & sunshine & well, driving. Which can get old, but it wasn't too bad!

My sister & her husband bought a new sofa (a leather sectional & it is NICE!), so they gave me their couch, chair-and-a-half & ottoman. I am SO excited! We've had mismatched couches for awhile now, both with slipcovers, but slipcovers can be a pain! I am excited to have couches without them! We gave away both of our other couches - to very good causes as it turns out. And mom & dad came with me today to bring my new furniture home!

We almost went in just dad's truck. I am so glad we decided to bring mom's car "just in case"! The couch cushions & throw pillows wouldn't have fit in dad's truck once we got the furniture on!

So on the way, my parents & I stopped at Chic-fil-a for breakfast. I thought i might see my friend Robert, because, well, he is OBSESSED with chic-fil-a. And guess what? I did! So he got to meet my parents, which was fun. We sat outside, because the day was too pretty!

We headed to Michelle & Michael's (incidentally, their names are WAY too similar! I have accidentally texted him meaning to text her! And his sister said she always second guesses herself when posting something on his Facebook wall, when she means to post on Michelle's. And vice versa. But anyway.)

We visited with them at their house for awhile, and then decided to go to lunch. My sister lives in Mandeville & I LOVE IT. Such a pretty clean city. Very nice. I could totally move there! They also have low crime, which is crazy to me since Baton Rouge & New Orleans are high crime & Mandeville is on the way to New Orleans from Baton Rouge! ANYWAY, we drove to Madisonville for lunch and ate on the riverfront. I was still full from breakfast, so i just had a side salad. I was kind of mad, because they had boiled crawfish & I've been DYING for some... but we had breakfast too late not knowing we were going to be having lunch! Haha. Oh-well. ;) 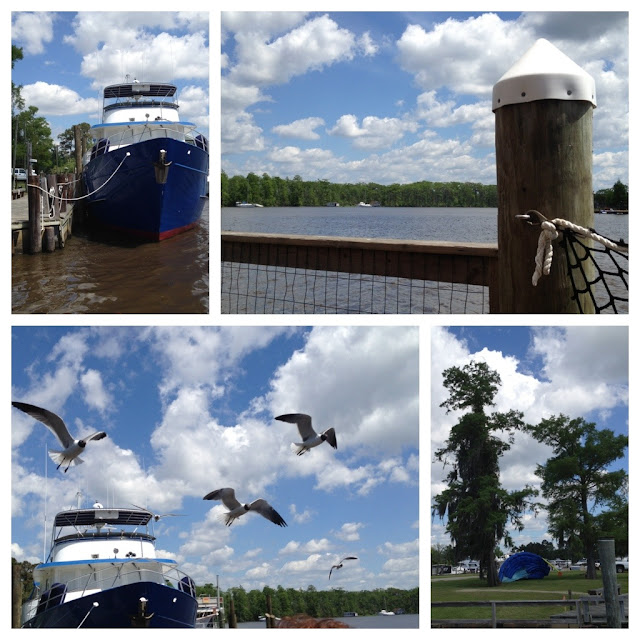 We had such a good time visiting! It was GORGEOUS! I was so wishing i had my Canon; I told Michelle I'm coming back just to take pictures. (These were taken with my iPhone.) 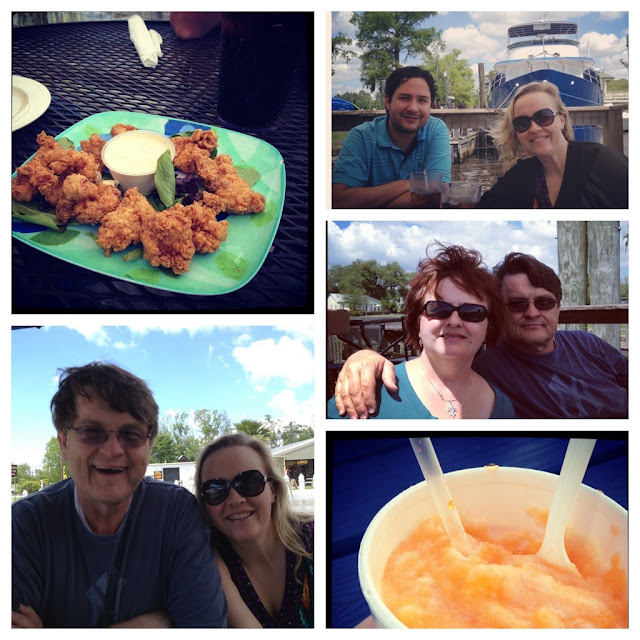 (Top left pic - that would be alligator nuggets. Yes, i live in Louisiana. Those are Michael's, but i did have one. Really good. Tastes like chicken! Haha.)

After that we headed back & stopped & got Snowballs. Let me just say. I am not supposed to have those. It was amazing & I enjoyed every bite, but I gotta get it together!
After all of that, we headed back to their house & loaded dad's truck & mom's car & drove back home.

I LOVE my new (to me) furniture! It looks great in here & saves room. And I'm SO comfy right now. 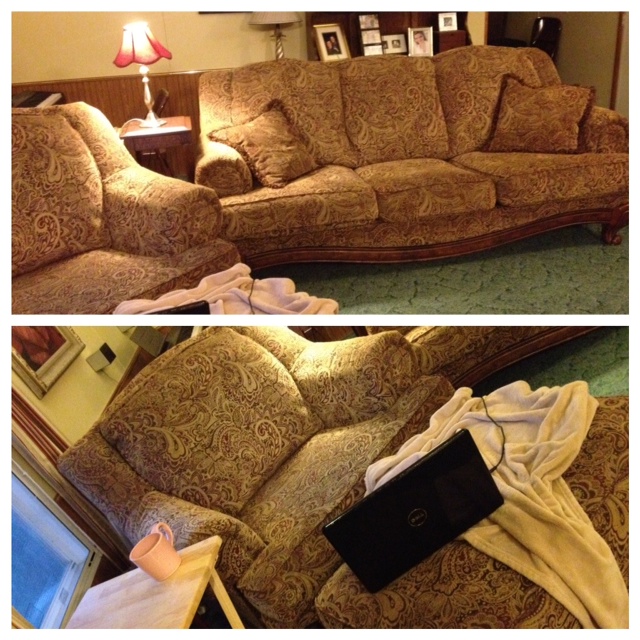 (That bottom pic? That is "my spot". So much COMFORT. LOVE!)

Tomorrow is church & we decided to go with mom & dad for Easter Sunday. Afterwards, we'll go to Brad's Aunt KK's for lunch. Yay for family time!

How is your weekend? {{Group Hug!}}
Posted by Melissa at 7:33 PM
Email ThisBlogThis!Share to TwitterShare to FacebookShare to Pinterest
Labels: Family, holidays, Louisiana, sisters, weekends