So, I've been very busy with a show these days. I'm stage managing The 39 Steps, which is a spoof of the 1935 Alfred Hitchcock film. We have been pretty much non-stop in rehearsals for two weeks. Well, months, but 2 weeks without a night off! I kept thinking... if i could just make it to opening night... i will survive! Well, i made it! It came very quickly! And it's pretty much smooth sailing from here on out! (Knock on wood!)

The show is HILARIOUS. So fun. Lots of work! But I am so glad to be a part of it.

This promo is about 30 seconds long. Watch it! It will make my day!


Yes! 4 actors. 150 characters. It is GREAT FUN. I am loving doing a show with these four actors, too. They are all doing a fantastic job, and there are times where I am laughing so hard I can hardly contain myself. HYSTERICAL. They are each very talented & I wish every one of you could see it. My parents actually came today & loved it! And Brad can't stop talking about how funny it was! 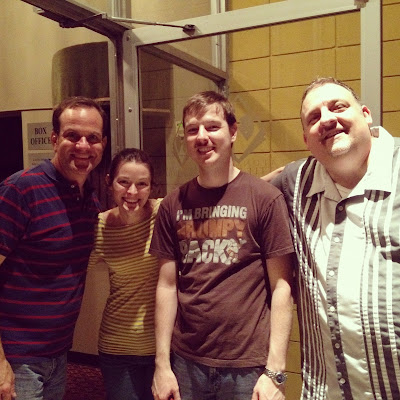 I love each one of these. They're all very easy to work with & very down to earth. I have worked with Albert & Ronald many, many times. Ronald & I were in my first show together & we hit it off immediately. I have worked with Robby some, too...he is a great guy with a great family. I have his son Elijah & his sister Jessica working backstage! So that's kind of fun! :) I've never worked with Erica, but I am enjoying getting to know her during this show. She went to my high school but she was a junior when i was a little freshman! And her last show (before this one) was the show right before my FIRST show.. so we haven't had the opportunity to work together until now. Each one of these actors brings so much to the table. They make it so enjoyable! 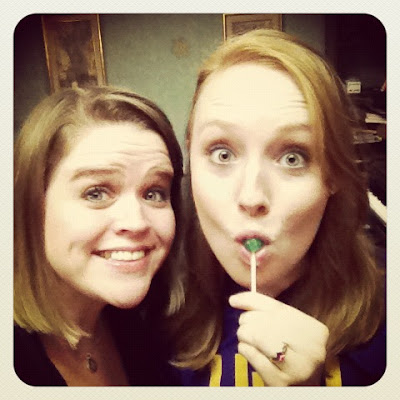 
My crew? Wow. I am so, so proud of them. My friend Emily is my Assistant Stage Manager. She's done crew before, but she's never worked as ASM or SM. She is usually found ON the stage, but she was interested in learning how to work behind the scenes. She is doing a great job, and I honestly COULD NOT do this show without her. At all. Stage Managers have to "call the show" - meaning, say things like "Standby, lights..." and then at the right time "...lights, GO!" & then the lightboard operator will hit the button for the next light cue to go. There are 90-something light cues! Not to mention the fly's (curtains) going in & out or the turntable! And shadow puppets. Yes, this is the craziest show I've ever done.

So Emily is basically calling the fly cues & making sure those set changes go smoothly, so i can focus on things like sound & lights! She is doing an awesome job! 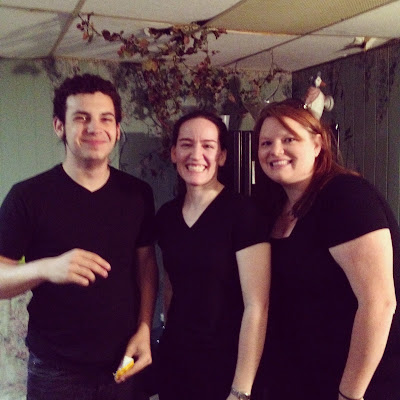 Some of my crew: Elijah, Jennifer & Amy!

The rest of my crew? Well. This is their first time to work backstage. And I am just amazed at how well they're doing. They (and Emily, of course) fit right in & once they got the hang of everything, I have not had to worry about a thing! So thankful & so proud! I am enjoying to get to know them, too. Now, Amy (far right) & I have been friends for years... I was in desperate need of crew & I recruited her. And i am thrilled to get to hang out with her & to have her as a part of the BRLT family. She's enjoying it, too!

So we have had rehearsal every night without a break for two weeks. A week. Then tech rehearsal last Saturday. Then another couple of days. And then preview, pay-what-you-can, and opening night. I finally got to relax ALL DAY yesterday until last night's performance. There was a matinee today.

AND NOW...not another show until Thursday. :)

Glad for the break!

So ... that's where I've been! And hey! Come see the show if you're in town & are able!
Posted by Melissa at 7:12 PM
Email ThisBlogThis!Share to TwitterShare to FacebookShare to Pinterest
Labels: BRLT, Stage Managing, Theatre